The Powder River Basin of Wyoming and Montana contains about 162 billion short tons (BST) of recoverable coal from a total of 1.07 trillion short tons of in-place resources according to a new USGS assessment. This assessment also estimates that 25 BST of those resources are currently economical to recover, the first such estimate released by the USGS for coal for an entire basin.

The Powder River Basin—a large geologic feature located in northeastern Wyoming and southeastern Montana—contains the largest deposits of low-sulfur subbituminous coal in the world. This study is significant because it illustrates that only a relatively small percentage of in-place coal resources are technically and economically recoverable.

“The United States is well-known for its rich endowment of coal resources and our in-place estimates bear that out,” said USGS Acting Director Suzette Kimball. “It’s important to note, however, the substantial difference between what is in-place and what is technically recoverable, let alone economic. This new basin-wide assessment provides that critical link for government and private managers to make informed decisions.”

In 2011, the 16 mines in the PRB produced 462 million short tons (MST), about 42 percent of the Nation’s total coal production that year.  Subbituminous coal is typically used in electric power generation.

The key to this study was taking advantage of the wealth of recently available geologic data from the interpretation of thousands of new drill logs from coalbed methane development in the PRB.  More than 8,000 new drill holes were added to the original Gillette coal field database alone. About 30,000 total data points were used in the entire PRB assessment. This geologic information interpreted from well information of the recent drilling provided an unprecedented level of data about the coal resources for the basin.

The USGS developed the geologic information that formed the basis of this assessment in cooperation with the Wyoming State Geological Survey and the Montana Bureau of Mines and Geology. 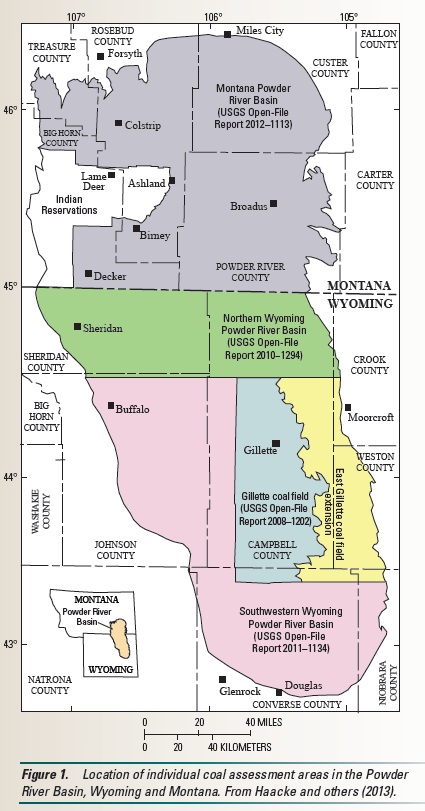 To arrive at the estimate of recoverable coal and 25 BST of reserves, USGS scientists selected portions of those coal beds from the total in-place resources that were deemed both shallow and thick enough to be recoverable using current surface mining technology. Ten conceptual mine models were developed to account for the differences in coal bed geology using proven mining techniques for each the four assessment areas of the PRB. Then, estimated mining costs were calculated for all of the modeled coal resources.  Finally, those resources that could be produced at or below the current sales price for PRB coal were designated reserves.

The current 25 BST of reserves does not mean that is all that remains mineable. The size of reserves change because mining costs and coal sales prices are subject to fluctuation  based on market conditions – recoverable resources become reserves with favorable changes in costs, demand, and prices.

To learn more about this or other geologic assessments, please visit the USGS Energy Resources Program website. Stay up to date with USGS energy science by subscribing to our newsletter or by following us on Twitter.