*Lived in the ocean more than 500-million years ago*

A bizarre creature that lived in the ocean more than 500-million years ago has emerged from the famous Middle Cambrian Burgess Shale in the Canadian Rockies.

Officially named Siphusauctum gregarium, fossils reveal a tulip-shaped creature that is about the length of a dinner knife (approximately 20 centimetres) and has a unique filter feeding system.

Siphusauctum has a long stem, with a calyx – a bulbous cup-like structure – near the top that encloses an unusual filter feeding system and a gut. The animal is thought to have fed by filtering particles from water actively pumped into its calyx through small holes. The stem ends with a small disc which anchored the animal to the seafloor. Siphusauctum lived in large clusters, as indicated by slabs containing over 65 individual specimens.

Lorna O’Brien, a PhD candidate in the Department of Ecology and Evolutionary Biology at the University of Toronto and her supervisor, adjunct professor Jean-Bernard Caron, curator of invertebrate palaeontology at the Royal Ontario Museum, reported on the discovery Jan. 18 in the online science journal PLoS ONE. 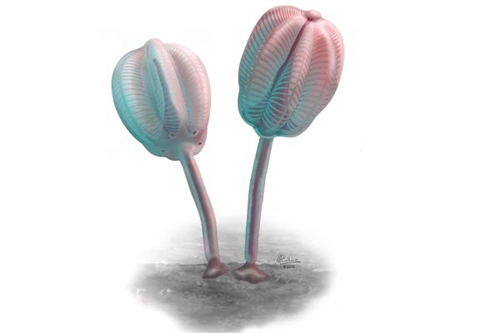 In this reconstruction of Siphusauctum gregarium, the animals are shown in life position, standing upright in the water column. (Illustration by Marianne Collins)

“Most interesting is that this feeding system appears to be unique among animals. Recent advances have linked many bizarre Burgess Shale animals as primitive members of many animal groups that are found today, but Siphusauctum defies this trend.  We do not know where it fits in relation to other organisms,” said lead author O’Brien.

“Our description is based on more than 1,100 fossil specimens from a new Burgess Shale locality that has been nicknamed the Tulip Beds,” she added.

Located in Yoho National Park, British Columbia, the Tulip Beds were first discovered in 1983 by the Royal Ontario Museum. They are located high on Mount Stephen, overlooking the town of Field. Like the rest of the Burgess Shale, the beds represent rock layers with exceptional preservation of mostly soft-bodied organisms.

The Burgess Shale, protected under the larger Rocky Mountain Parks UNESCO World Heritage site and managed by Parks Canada, preserves fossil evidence of some of the earliest complex animals that lived in the oceans of our planet nearly 505 million years ago. The discovery of Siphusauctum expands the range of animal diversity that existed during this time period.

The research was partially funded by UofT fellowships to O’Brien and a Natural Sciences and Engineering Research Council of Canada Discovery Grant awarded to Caron.

To learn more about the Burgess Shale visit burgess-shale.rom.on.ca