Patients with metastatic melanoma taking the recently approved drug vemurafenib (marketed as Zelboraf) responded well to the twice-daily pill, but some of them developed a different, secondary skin cancer.

Now, researchers at UCLA’s Jonsson Comprehensive Cancer Center, working with investigators from the Institute of Cancer Research in London, Roche and Plexxikon, have elucidated the mechanism by which the drug excels at fighting melanoma but also allows for the development of skin squamous-cell carcinomas. 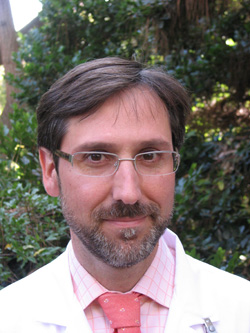 The very action by which the pill works — blocking the mutated BRAF protein in melanoma cells that spurs the growth and spread of tumors — sets off a cellular cascade in other skin cells (if they have another predisposing cancer mutation) and ultimately accelerates the secondary skin cancers, said Dr. Antoni Ribas, co-senior author of the paper and a UCLA professor of hematology–oncology.

The 18-month study appears in the Jan. 19 edition of the New England Journal of Medicine.

“We wondered why it was that we were treating and getting the melanoma to shrink but another skin cancer was developing,” said Ribas, who studies melanoma at the Jonsson Cancer Center. “We looked at what was likely making them grow, and we discovered that the drug was making preexisting cells with an RAS mutation grow into skin squamous-cell cancers.”

The combined research team performed a molecular analysis to identify the oncogenic mutations in the squamous-cell lesions of patients treated with vemurafenib. Among 21 tumor samples studied, 13 had RAS mutations. In another set of 14 samples, eight had RAS mutations, Ribas said.

“Our data indicate that RAS mutations are present in about 60 percent of cases in patients who develop skin squamous-cell cancers while being treated with vemurafenib,” Ribas said. “This RAS mutation is likely caused by prior skin damage from sun exposure, and what vemurafenib does is accelerate the appearance of these skin squamous-cell cancers, as opposed to being the cause of the mutation that starts these cancers.”

Ribas’ group found that blocking the non-mutated BRAF in cells with mutated RAS in an animal model caused them to send signals around BRAF that induced the growth of the squamous-cell cancers.

The discovery of the squamous-cell cancer mechanism has led to strategies to inhibit both the BRAF mutation with vemurafenib and block the cellular cascade with a different drug — a MEK inhibitor — before it initiates the secondary skin cancers, said co-senior author Richard Marais, a professor at the Institute of Cancer Research in London, who developed the animal model for the study.

“By understanding the mechanism by which these squamous-cell cancers develop, we have been able to devise a strategy to prevent the second tumors without blocking the beneficial effects of the BRAF drugs,” Marais said. “This may allow many more patients to benefit from these important drugs.”

Ribas said that this is one of the very few times that oncologists understand molecularly why a side effect to cancer treatment is occurring.

“The side effect in this case is caused by how the drug works in a different cellular setting,” he said. “In one case, it inhibits cancer growth, and in another, it makes the malignant cells grow faster.”

Studies currently are under way testing BRAF and MEK inhibitors in combination in patients with metastatic melanoma, Ribas said.

“Our data provide a molecular mechanism for the clinical toxicity of a targeted oncogene inhibitor that apparently contradicts the intended effects,” the study states.