COLUMBIA, Mo. – When Microdyne, LLC, needed help building a prototype for a dairy cattle breeding device, the company, based in St. Joseph, was ready to look overseas for a prototype manufacturing team. Then Microdyne was introduced to Mike Klote, manager of the University of Missouri’s College of Engineering prototype development facility, and a solution was found that also provided MU engineering students a valuable educational opportunity.

Microdyne had developed the electronic components for their device, but had no way to build it. MU’s prototype lab developed the plastic casing for the device, and Microdyne is now offering a patented product, the “TattleTale™,” to dairy farmers around the country.

“We were prepared and actually began to have this development work done in China, but with the help of MU’s Center for Innovation and Entrepreneurship, we were able to find the prototype development facility and other highly skilled people locally,” said Jim Jackson, spokesperson for Microdyne. 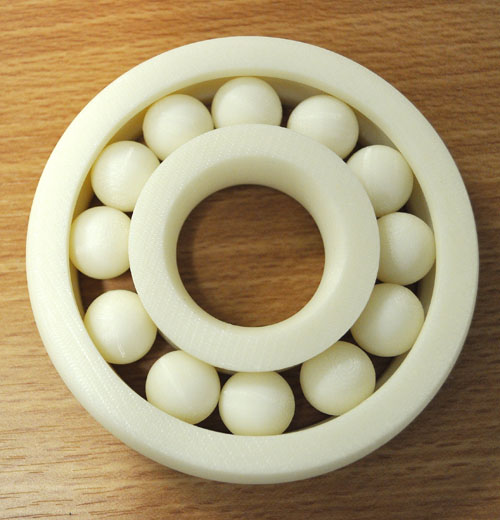 Prototype manufacturing utilizes a process called additive manufacturing, where a model is developed on the computer and the prototype machines create the model, layer by layer. With the MU lab’s electronic circuit design, circuit board development and traditional machining capabilities, the prototype development facility is a one-stop shop.  The lab has created prototypes as varied as a canine leg bone for veterinary medicine students to a plastic roller bearing developed for a local industry. 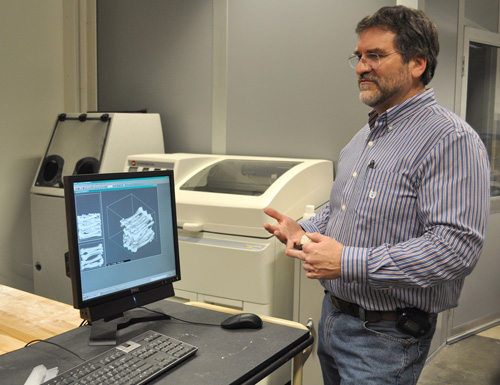 Mike Klote, manager of the College of Engineering’s prototype development facility, explains the 3D rapid prototype process used to fabricate models of dog leg bones for MU veterinary medicine faculty on one of four prototype machines available in the lab. The computer model used in the process is shown on the screen in front of the prototype machine. Image credit: University of Missouri

“We have unique capabilities within engineering that don’t exist in many places, including four rapid prototype machines, each with a slightly different process and a unique function,” Klote said. “A new mold to use in a standard manufacturing process can cost $30,000, but you may only need 100. We can fabricate those parts easily and much cheaper using rapid prototyping, and the students who work in our lab have been getting internships based on their work experience with models and prototypes.”

For more information, visit engineering.missouri.edu/prototype or call the lab at 573-882-3798.