UD researchers discuss a new underwater robot that will assist in marine research.

An underwater robot made a splash at a University of Delaware swimming pool recently in a test of the new equipment, which will soon be used in field research by College of Earth, Ocean and Environment (CEOE) scientists.

“It has just about everything you could want,” said Douglas Miller, associate professor of oceanography.

Miller and Arthur Trembanis, associate professor of oceanography and geological sciences, tested the ROV’s maneuverability and imaging features at the Carpenter Sports Building’s swimming pool. The machine successfully darted around the pool, churning up a plume of water before plunging underwater with two bright headlamps lighting its way. 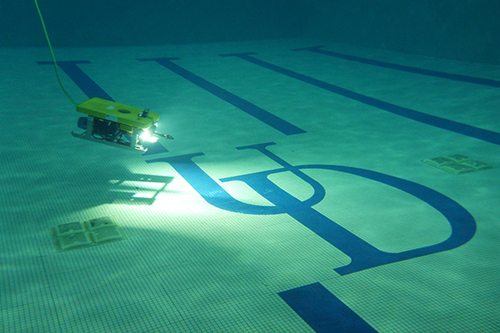 UD’s new remotely operated vehicle at test in the diving well at the Carpenter Sports Building. Photos courtesy of Mark Moline and by Ambre Alexander

About the size of a laundry basket, the robot has a yellow plastic and metal frame that contains four waterproof video cameras: three in the front — one of which is high-definition — and one in the back. A sonar system uses sound to make detailed pictures of seafloor contours, and a three-pronged arm opens and closes to grip rocks, clams and other marine samples.

Powered by a long tether attached to a control station, the ROV is operated by a joystick and a set of buttons — like a video game. Researchers could easily watch it move around in the pool, but at sea they will have to rely solely on the compass and navigation system.

“Usually you’re not able to see it,” Trembanis said, adding that his lab has a simulator for student practice. “You have to remember that the orientation is relative to where it is.”

CEOE researchers have used ROVs to examine shipwrecks and geological formations off Delaware’s coast, but they had to work with contractors because the college lacked its own equipment. The new machine will increase access to the technology and give students the opportunity for hands-on training. 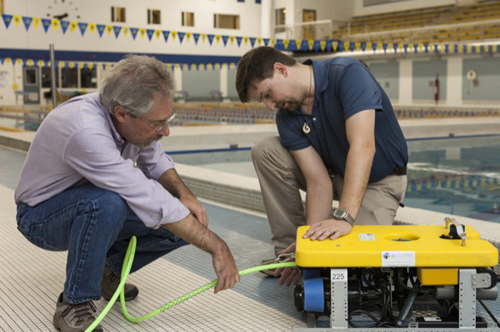 Mark Moline, director of the School of Marine Science and Policy, joined the researchers for the pool test, wearing his scuba gear to swim with the ROV and check that it functioned properly. He will take it on an upcoming research expedition to Palau in the western Pacific, working with the Navy to study how water flows around the islands there. He will also document the vertical walls of coral reefs.

“People are trying to figure out and map the true distribution of organisms,” Moline said.

Off the coast of Delaware, Miller plans to use the ROV to take video of sea life inhabiting the Redbird artificial reef and count the number of mussels, for example, that are present. The robot’s arm could potentially pluck off samples for further examination. 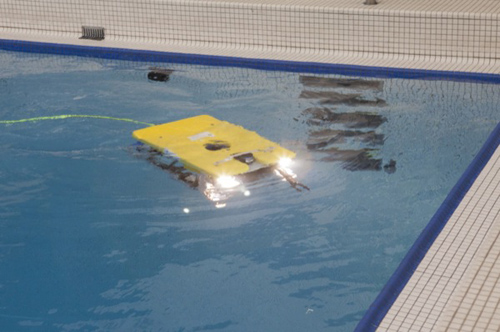 The ROV will be used for ocean research in the College of Earth, Ocean, and Environment. Photos courtesy of Mark Moline and by Ambre Alexander

The ROV was custom-built by Outland Technology Inc. in Louisiana, where the devices are commonly used by the energy industry to inspect gas lines and oil rigs. The cameras can switch to black-and-white if visibility is poor to get a better picture, and sensors on the ROV record depth, date and time with each video stream.

At the initial testing, all systems were in working order and ready for use in the ocean.

“This is fantastic,” Trembanis said. 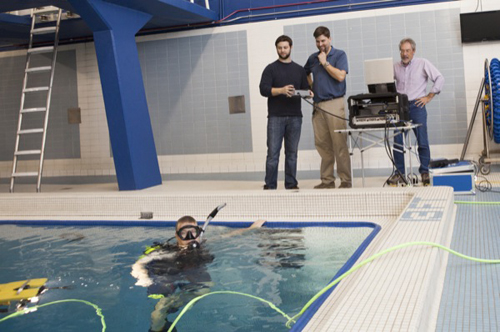