COLLEGE PARK, Md. – An archaeological team from the University of Maryland is uncovering an unexpectedly rich haul of household materials from an historic African American home in Annapolis. The team has one more week to go in their excavation.

The archaeologists resumed work at the James Holliday House – a middle class home purchased in 1850 by one of the first African Americans to work for the U.S. Naval Academy.

The team says their finds detail how a well-off African American family adapted a middle class lifestyle to the realities of post-Civil War Annapolis. Also, they are exploring the family’s marital ties to the city’s Filipino community. 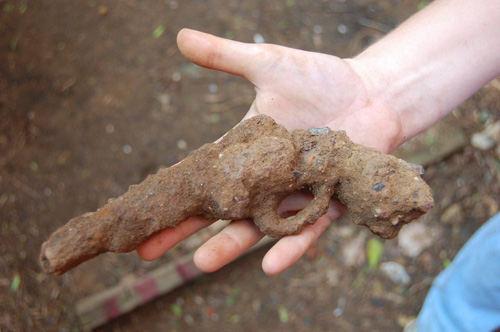 James Holliday – born a slave in 1809 and freed in 1819 – served as a messenger to the superintendent of the U.S. Naval Academy for almost 40 years. He took the job in 1845, and five years later bought the home at 99 East Street in Annapolis.

The excavation of the Holliday House is being conducted by the University of Maryland archaeological Field School in Urban Archaeology. They will complete this year’s work on Thursday, June 16 and close up the site the next day.

The team of graduate and undergraduate students began work in the summer of 2010, identifying an intact archaeological trove four feet deep at the site, and recovering large numbers of broken dishes and bottles, both whole and broken. Since then, these have been analyzed at the universitys Archaeology Laboratory. The findings are reported here for the first time.

The archaeology at the site reveals the Holliday family to have been well-off, especially after Emancipation in 1865, based on the quality of the dishes used for dining, the team concludes. 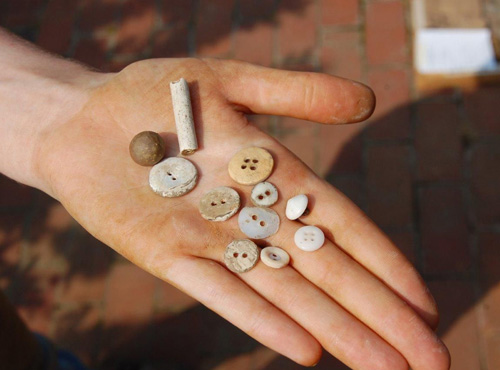 Buttons, marble, and pipe stem from the Basement of the James Holliday House. Image credit: University of Maryland

“African-Americans in Annapolis displayed the outward appearance of conforming to Victorian etiquette by buying and using fancy, up-to-date dishes, but uniquely, only in limited numbers,” explains University of Maryland archaeologist Mark Leone, who created and directs the Archaeology in Annapolis program. “They bought them in small numbers, perhaps for financial reasons, perhaps to put their own unique stamp on their dining. Their table looked up-to-date, but the dishes did not have a single decorative pattern.”

Leone and his students have found a similar approach only in other 19th century Annapolis African American households, such as the Maynard-Burgess House, excavated in the 1990s. White families do not appear to have set their tables in this manner. 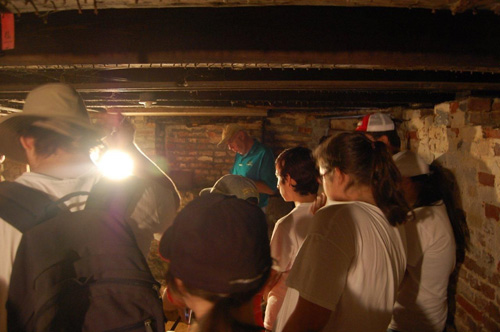 “The absence of matching sets in African American assemblages in Annapolis is not an indication of African Americans being unaware of or being unable to look middle class,” adds Kate Deeley, a University of Maryland archaeology graduate student co-directing the work at the site and the lab analysis. “Rather, it shows a conscious choice to acquire dishes in small quantities rather than in matching sets. Nineteenth century ceramics were marketed in etiquette books and newspapers as sets of complementary dishes. Mass production of these ceramics made them available even to poorer consumers.”

Analyses of the dishes from the James Holliday House have shown a wide variety of different decorative techniques and a large number of different dish forms within the assemblage, which conforms to the trend among African Americans.

“Over time, the ceramics found at the Holliday House indicate a preference for the more stylish types of pottery, with a transition from creamware, to pearlware, then to whiteware,” says Deeley. “The Holliday family was aware of the expectations of Victorian society and felt the need to conform, but with smaller numbers of dishes.” 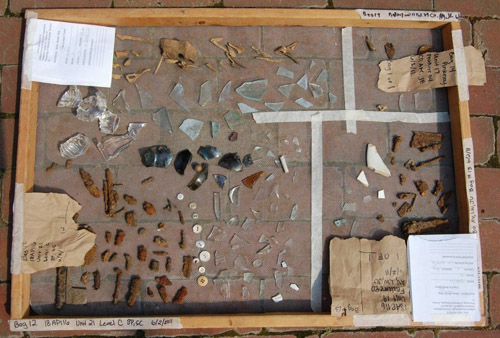 Artifacts from the Holliday. Image credit: University of Maryland

Medicine and mineral water bottles showed that the Holliday family used home remedies for self-medication, which frequently means they did not have access to professional medical care – a pattern in segregated Annapolis.

African Americans used the same brands of mineral water, according to work done by Justin Uehlein, an undergraduate student working with Dr. Leone.

Early in the 20th century the Hollidays married Filipinos from Annapolis. In the 19th and early 20th centuries, African Americans and Filipinos faced similar discrimination from the white-dominated city. Many Filipinos came to the United States through the U.S. Navy and settled in port cities, like Annapolis, after completing their service.

Students and Instructors are blogging from the site. Media may arrange for a tour of the site by contacting Mark Leone.