Massive device to travel by barge and truck this summer

AMHERST, Mass. – Nuclear physicist David Kawall at the University of Massachusetts Amherst is among scientists from 26 institutions worldwide who are waiting patiently for an electromagnet 50 feet in diameter to be transported from New York to Illinois, where they plan to launch an experiment in 2016 that could open new realms of particle physics.

Kawall’s responsibility will be to measure very precisely the magnetic field inside the ring-shaped magnet when it arrives at its new home sometime in late July. “It’s definitely new territory,” he says, “because we need to measure the field accurately to 70 parts per billion in this huge magnet. The payoff is enormous, however, because we expect the new experiment to yield results four times more precise than the previous effort was able to attain.” 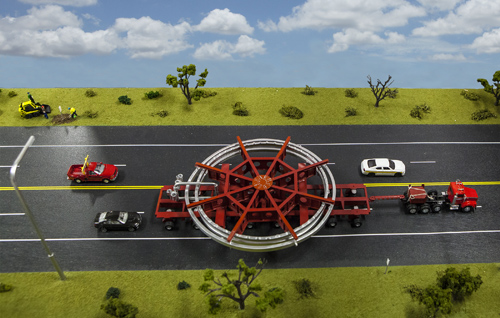 A model of the truck that will be used to transport the Muon g-2 ring, placed on a streetscape for scale. The truck will be escorted by police and other vehicles when it moves from Brookhaven National Laboratory in New York to a barge, and then from the barge to Fermi National Accelerator Laboratory in Illinois. Image credit: Fermilab

The experiment is called Muon g-2 (g minus two), and will study the properties of muons, tiny subatomic particles that exist for only 2.2 millionths of a second. The core of the experiment is a machine built at the U.S. Department of Energy’s (DOE) Brookhaven National Laboratory in the 1990s, and the centerpiece of that machine is a circular electromagnet made of steel and aluminum, 50 feet wide, with superconducting cable inside. It is being moved from Brookhaven in Upton, New York to its Fermi National Accelerator Laboratory (Fermilab) in Batavia, a Chicago suburb.

James Siegrist, DOE’s associate director of science for high-energy physics, says, “The Muon g-2 experiment is an important component of the future of particle physics in the United States.” Lee Roberts of Boston University, spokesperson for the experiment, says, “It costs about 10 times less to move the magnet from Brookhaven to Illinois than it would to build a new one. So that’s what we’re going to do. It’s an enormous effort from all sides, but it will be worth it.”

While most of the machine can be disassembled and brought to Fermilab in trucks, the massive electromagnet must be transported in one piece. It also cannot tilt or twist more than a few degrees, or the complex wiring inside will be irreparably damaged. The Muon g-2 team has devised a plan to make the 3,200-mile journey that involves loading the ring onto a specially prepared barge and bringing it down the East Coast, around the tip of Florida and up the Mississippi River to Illinois. 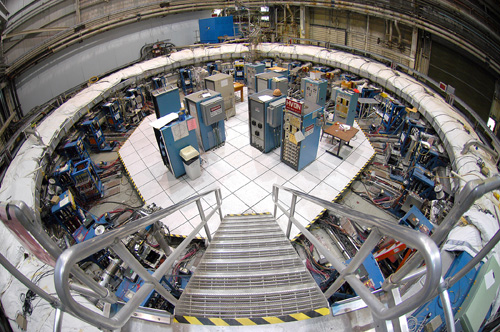 The ring is expected to leave New York in early June, traveling by night at speeds up to 10 mph, and land in Illinois in late July. Once there, the ring will be placed on a specially built truck and driven to Fermilab.

Once in its new home, the storage ring will be used to hold muons created in the laboratory’s accelerators. Muons “wobble” when placed in a magnetic field, and based on what is known about the universe, scientists have predicted the exact value of that wobble. An experiment using the same machine at Brookhaven in the 1990s saw evidence for, though not definitive proof of, a departure from that expected value.

“Fermilab can generate a much more intense and pure beam of muons, so the Muon g-2 experiment should be able to close that margin of error,” said Chris Polly, project manager for Fermilab. “If we can do that, this experiment could indicate that there is exciting science awaiting beyond what we have observed.” 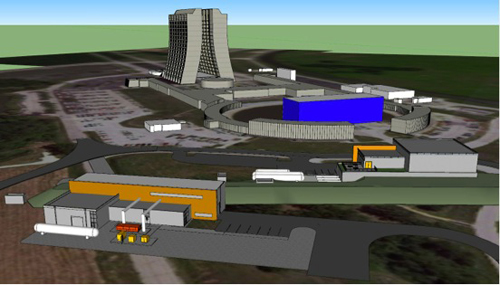 Conceptual drawing of the buildings on the Fermilab site that will host the new Muon g-2 and Mu2e experiments. Image credit: Fermilab

UMass Amherst’s Kawall worked on the Brookhaven experiment as a post-doctoral researcher at Yale. He now leads the team responsible for measuring the strength of the magnetic field in the new experiment to an accuracy nearly 2.5 times what was achieved in the Brookhaven experiment. He says, “The physics community is quite interested in the outcome, as the new experiment will be sensitive to the presence of entirely new particles in nature, or it could preclude their existence. Either outcome helps us better understand the fascinating universe we live in.”