In the laboratory, the researchers have dramatically improved the removal of phosphorous, nitrogen and other prime urban pollutants from runoff. To achieve these results, they’ve re-engineered bioretention projects, also known as rain gardens – special strips of greenery that capture and filter storm runoff before it enters the watershed.

Now, in partnership with the Prince George’s County Government, the researchers will demonstrate the effectiveness of their new approaches by improving the capture and treatment of University of Maryland campus runoff that would eventually end up in Chesapeake Bay waters.

“Runoff from urban development represents a growing source of pollution to the Chesapeake watershed, and we believe we can help curb this,” says Allen P. Davis, a University of Maryland professor of Civil and Environmental Engineering (A. James Clark School of Engineering) and the lead researcher on the project. “Our technologies offer major improvements, and could one day be used by housing developments or businesses to reduce their environmental footprint.”

With a new grant from the National Fish and Wildlife Foundation and the Prince George’s County Government totaling nearly $600,000, Davis’s team will conduct a three-part demonstration project near parking lots at the university’s Comcast Center. The project is designed to reduce phosphorus, nitrogen, sediment and the volume of runoff from the university into the Anacostia watershed, one of the rivers feeding the Chesapeake Bay.

“The university already is recognized as one of the greenest in the nation, and with this project, we’ll be able to reduce our environmental impact even further,” Davis adds.

The campus is current on all stormwater and other environmental permits and this project is not part of any legally mandated cleanup efforts. “Success in this project will have enormous impact for continued retrofit and new designs for reductions in nitrogen, phosphorus, sediment, and runoff volume to the Chesapeake Bay,” says the project proposal.

Over the past two decades, bioretention technologies have been used in the Chesapeake Bay watershed with some success. Runoff from parking areas is directed into a carefully engineered, yet natural, sponge-like layer of greenery that slows the onrush of rain water and helps remove a suite of pollutants. 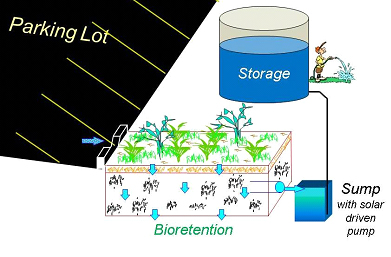 “A matter of minutes or hours can make all the difference in the quality of the rain water that empties into a creek,” Davis explains. “Detaining the runoff gives us the margin of time needed to filter it and remove critical pollutants.”

Where the current technology has fallen short is in the removal of phosphorous and nitrogen. These pollutants “remain the top concerns for the Chesapeake Bay,” their proposal says, especially in urban areas. To achieve enhanced phosphorous and nitrogen removal and to conserve rain water for useful purposes, the project involves the following parts:

·         ENHANCED BIORETENTION FOR PHOSPHOROUS REMOVAL: Existing projects will be retrofit and new bioretention strips constructed. These natural soil and vegetation strips, roughly 50 by 10 feet, work like a sponge, capturing and delaying runoff after rain showers. An added layer of a special powdered aluminum hydroxide will help strip phosphorus from the runoff. The engineers predict very low phosphorous discharge levels.

·         NITROGEN NEUTRAL PARKING LOT: A permeable, porous concrete campus parking area will be constructed for enhanced nitrogen removal. Rain water will collect and drain through this area into a submerged basin where natural, passive denitrification can take place. The sand or gravel basin will contain a carbon source, such as mulch or shredded newspaper. Piping will keep the tank full of water, creating anoxic conditions. The combination of anoxic conditions and carbon will trigger denitrification. The engineers predict a 75 percent improvement in nitrogen removal.

·         WATER CONSERVATION: Treated runoff from bioretention strips will be collected by a solar sump pump and cistern. The collected runoff will be used for campus irrigation, preventing runoff discharge and concurrently reducing potable water use. Zero runoff and zero pollutant discharge is the goal. 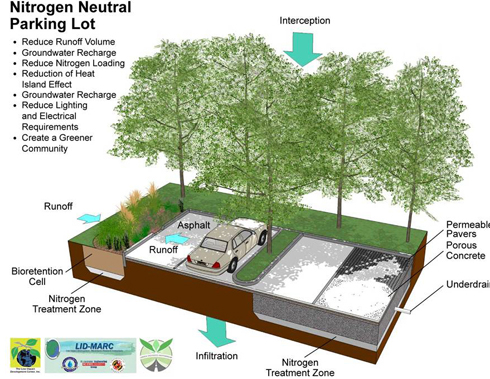 About the image: Denitrification takes place under this porous parking area. Image credit: University of Maryland

The researchers will work to maximize the effectiveness of these technological advances over the next two or three years.

The 2008 University Strategic Plan firmly establishes sustainability as part of the mission of the institution and sets the goal for the university to be “a national model for a Green University.”

Researchers across campus are applying cutting edge technologies to environmental problems of all scales. Environmental management and ecology of the Chesapeake Bay remains an important research and educational focus.

“This is the second large grant issued to Dr. Davis in which he will work with campus units to install advanced stormwater control technology that will both benefit his research and improve the quality and quantity of stormwater that flows from the campus,” says Scott Lupin, who directs the university’s Office of Sustainability. “These are very important issues for us. This project was endorsed by the University Sustainability Council, which will focus on furthering campus water and stormwater policies and goals during the next academic year.”

In addition to research, many staff and administrators are working hard to green their departments by reducing material consumption, increasing recycling rates, reducing energy use, and encouraging other responsible behaviors, Lupin adds.

Recently, Maryland was among 18 universities to be named by The Princeton Review to its Green Rating Honor Roll.