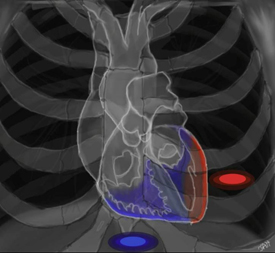 Hybrid Cardiac Procedure. Schematic of the heart showing the minimally-invasive approaches to allow access to the surface of the heart (the blue and red areas) during this hybrid cardiac procedure. Image credit: University of California

Generally, arrhythmias can be controlled by medications, and sometimes defibrillators. But a potentially life-threatening, recurrent arrhythmia known as a ventricular tachycardia, which originates in one of the heart’s two ventricles, can produce a fast heart beat that requires other interventions, such as catheter ablation, in which the precise focus area of the arrhythmia must be controlled.

Cardiologists will often use catheter ablation once medications and other therapies have failed. The procedure involves the insertion of a tiny, metal-tipped catheter through a vein in the groin or neck to reach the inside of the heart. Prior to the procedure, electrical tests are conducted on the heart to identify and map the exact site of the arrhythmia’s origin.

While ablation is usually performed inside the heart, in about 15 to 30 percent of patients with dangerous ventricular tachycardias, the site responsible for the abnormal rhythm is on the heart’s outer surface. Normally, this can be addressed by an ablation procedure, performed in a cardiac catheterization lab, in which doctors thread a wire with a metal-tipped catheter inside the body, under the ribcage, to apply heat or cold to the area of the heart’s ventricle that is producing the arrhythmia, stopping it.

However, in high-risk patients who have scarring from previous heart surgeries, it is difficult to reach the outside of the heart. To tackle this problem, a team at UCLA has devised a hybrid approach combining catheter ablation with minimally invasive surgical techniques.

“UCLA is at the forefront of developing and using new techniques and approaches to better access a high-risk patient’s heart to stop difficult-to-reach, life-threatening arrhythmias,” said Dr. Kalyanam Shivkumar, professor of medicine and radiological sciences and director of the UCLA Cardiac Arrhythmia Center and Electrophysiology Programs.

A study in the November issue of the journal Heart Rhythm reports on UCLA’s experience with the two newer surgical methods, used together with catheter ablation, in 14 high-risk patients who had ventricular arrhythmias treated between September 2004 and March 2010.

In order to perform more accurate electrical mapping of the heart and apply precise ablation therapy in hard-to-reach areas in high-risk patients, surgeons used one of two minimally-invasive cardiac surgical techniques to open a small window in the chest to view the heart.  Depending on the area of the heart the team needed to access, they used either a procedure called a subxiphoid window or one known as a limited anterior thoracotomy.

The ability to directly visualize the heart and navigate around scar tissue and blood vessels to get closer to the heart’s surface, significantly improved accuracy in applying the ablation techniques to stop the arrhythmias.

“These newer, more minimally-invasive procedures offer more treatments for high-risk patients who don’t have a lot of options to address a life-threatening arrhythmia, allowing them to avoid potential open heart surgery,” Shivkumar said.

“UCLA is a leader in utilizing these hybrid procedures to meet individual patient care needs. We hope our experiences can help move the field forward,” Shivkumar said.

Shivkumar added that his team created new procedural protocols for using technologies such as electrical heart mapping systems and ablation catheters with these new hybrid procedures.