Temperatures in central China are 10 to 14 degrees Fahrenheit hotter today than they were 20,000 years ago, during the last ice age, UCLA researchers report — an increase two to four times greater than many scientists previously thought.

The findings, published on May 14, 2013, in the early online edition of the journal Proceedings of the National Academy of Sciences, could help researchers develop more accurate models of past climate change and better predict such changes in the future.

“Previously, we could only infer temperature on land through changes in climate archives like tree rings or pollen over time,” said lead author Robert Eagle, a UCLA researcher in the department of Earth and space sciences. “This is the first time that temperature has been determined accurately on land at the time of the last ice age.”

To make their temperature measurements, the scientists used a technique known as clumped isotope thermometry, which detects subtle atomic differences in calcium carbonate, a compound commonly found in rocks, snail shells and wind-blown dust deposits known as loess. The method is the most accurate land-based temperature-determination tool available today.

“We can now tell what temperatures were on land 20,000 years ago with more accuracy than was ever previously possible,” said senior author Aradhna Tripati, a UCLA assistant professor in the department of Earth and space sciences and the department of atmospheric and oceanic sciences. 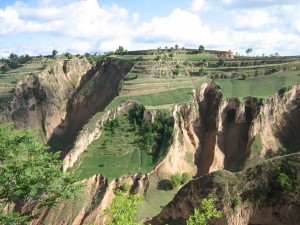 Tripati and Eagle chose to study the Loess Plateau in central China, a 250,000-square-mile agricultural region some 500 miles southwest of Beijing, because of its wide expanses of loess, the silty sediments that give the area its name and which contain deposits from the last ice age.

“We can calculate temperatures and reconstruct the chemistry of rainwater from the past ice age, then compare this to the present day climate in specific regions,” Eagle said. “We can then use this information to validate current climate models and study atmospheric processes.”

“One of the most important aspects of the study was showing that we could get the same result from such different types of carbonates,” said Tripati, who is also a member of UCLA’s Institute of the Environment and Sustainability. “Even though these materials integrate over very different time frames, they gave us the same result.” 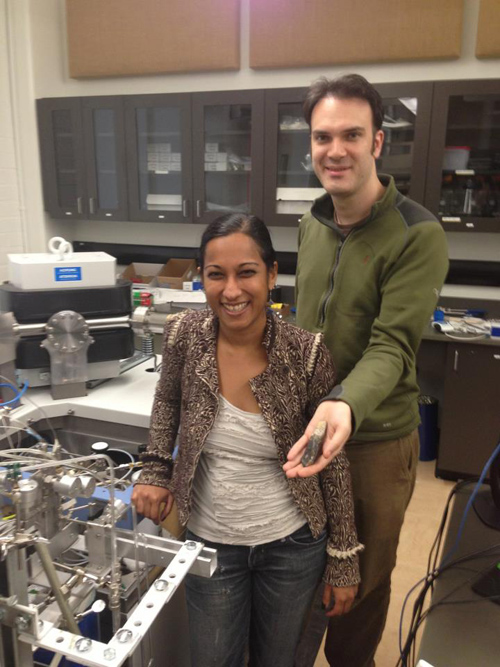 Comparing the findings with climate models

When Eagle and Tripati matched their findings against climate models predicting the change in temperature in central China from the previous ice age to the present, they found that those models that took into account atmospheric processes tended to be more accurate.

“It’s so important to have models that accurately depict regional climates on land for the study of past and future climate change. We were surprised at how poorly most climate models predicted temperature change in central China and also surprised at how sensitive this region has been to changes in climate forcing.”

Since the last ice age, numerous factors have influenced changes in global wind and precipitation patterns in Earth’s atmosphere. Atmospheric processes move in relation to a standing, stationary wave, which is an oscillating reference point that wraps around our planet like an invisible piece of string. The position of that wave around our planet has changed over time. Contributing factors have been a rise in carbon dioxide and other greenhouse gases, changes in incoming solar radiation and changes in the amount of ice covering the Earth’s surface.

For example, ice sheets can deflect the stationary waves so that winds and precipitation patterns fall more frequently in certain locations on the planet. But as ice has melted over the last 20,000 years, the stationary waves have shifted, influencing the circulation of the atmosphere.

“Clumped isotope thermometry has allowed us to say with more confidence how temperatures have warmed in central China, and how the chemistry of rainfall has changed. The climate models that did the best job of simulating temperature changes seemed to also be the ones to give the best depiction of changes in water cycling in this region,” Tripati said. “Our results suggest that in this region, temperature, water cycling and winds are very sensitive to changing climate forcing. Rises in greenhouse gas levels, melting ice sheets and changes in solar radiation can all affect not only temperature but precipitation and winds as well.”

“We have not dissected out the specific role of greenhouse gases, such as carbon dioxide, in this study, but they are certainly a contributing factor to temperature change and ice-sheet extent,” Eagle said.

The climate model developed by researchers at France’s Institut Pierre Simon Laplace des sciences de l’Environnement Global (the IPSL model) closely matched the data for this region in this study, but it has traditionally been one of the less frequently used climate models for predicting future climate change.

“That is quite extraordinary,” said Eagle, “because while more commonly used models have simulated a very small amount of temperature change in the region, that prediction was not validated by our data.”

Types of sediment similar to that found in central China exist in the Midwestern U.S., ranging from Mississippi to Nebraska, and they are currently being studied by scientists at UCLA.

“One of the things we’re doing is measuring samples from the loess deposits in the Midwestern U.S. to see how climate has changed in these regions,” Tripati said. “These deposits were also formed at the time of the last ice age and contain similar types of snail and soil carbonates that we analyzed in central China. It will be interesting to repeat a similar investigation in this region.”

This research was funded by the National Science Foundation (EAR-0949191).

Significant contributions to the research were made by Eagle and Tripati at UCLA; Gaojun Li, a faculty member at Nanjing University in China; UCLA collaborators Jonathan L. Mitchell, Ulrike Seibt and David Neelin; and Camille Risi, a research scientist at the Laboratory of Dynamic Meterology (LMD/IPSL) at the Center for National Scientific Research (CNRS) in Paris, France.