A new endoscopic surgical procedure has been shown to be safer and to result in better outcomes than the current standard medical treatment for patients who suffer strokes as a result of brain hemorrhages, UCLA neurosurgeons have announced.

The findings from their potentially groundbreaking, randomized, controlled phase 2 clinical trial, which was conducted at multiple medical centers, were presented last week at the International Stroke Conference in Honolulu. 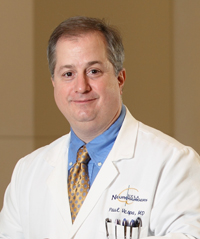 “These exciting results offer a glimmer of hope for a condition that most doctors have traditionally considered hopeless,” said principal investigator Dr. Paul Vespa, professor of neurosurgery at the David Geffen School of Medicine at UCLA and director of the neurocritical care program at Ronald Reagan UCLA Medical Center. “That is a big deal in medicine.”

Stroke is the leading cause of death and long-term disability in America. During a stroke, bleeding becomes toxic and deadly in the brain. Brain hemorrhage that causes stroke is a devastating, critical condition with a mortality rate of 75 percent. If a patient manages to survive, he or she could face a life of severe disability. Nearly 800,000 Americans suffer strokes each year.

In the past, brain surgery to treat such hemorrhages involved making a large incision to remove the blood. But this method traumatized the brain and failed to improve patients’ quality of life. As a result, open surgery is uncommon for bleeding in the brain.

The new study, led by Vespa and Dr. Neil Martin, chair of neurosurgery at the David Geffen School of Medicine at UCLA, in conjunction with Johns Hopkins University, set out to determine the safety and effectiveness of removing blood using a “keyhole” incision — smaller than the size of a dime — with the aid of an endoscope.

During the procedure, the endoscope, a tiny probe with a light and video camera on the tip, is used to navigate with GPS-like precision. The image-guided system displays CT scans of the brain on video monitors, allowing surgeons to immediately pinpoint and remove the blood.

“Endoscopic surgery has the key advantage of getting the blood out all at once, immediately alleviating the pressure on the brain and setting the stage for ultimate recovery,” Martin said.

Based on the study findings, the procedure appears to be safe, with no further bleeding or harm to the patient. On average, 71 percent of the blood was immediately removed.

The procedure was performed at seven major medical centers with 24 enrolled patients. Eighteen of the patients underwent the endoscopic surgery while six received standard medical treatment. Six months after the operation, endoscopic surgery patients were found to have better neurological outcomes and lower mortality rates than patients in the second group.

The team of neurosurgeons at UCLA determined that the procedure, known fully as intraoperative CT scan–guided endoscopic surgery, or ICES, appears to be a safe and potentially helpful surgical procedure for brain hemorrhage, and it will continue to be investigated in a more definitive clinical trial in the near future.