The overwhelming majority of proteins and other functional molecules in our bodies display a striking molecular characteristic: They can exist in two distinct forms that are mirror images of each other, like your right hand and left hand. Surprisingly, each of our bodies prefers only one of these molecular forms.

This mirror-image phenomenon — known as chirality or “handedness” — has captured the imagination of a UCLA research group led by Thomas G. Mason, a professor of chemistry and physics and a member of the California NanoSystems Institute at UCLA.

Mason has been exploring how and why chirality arises, and his newest findings on the physical origins of the phenomenon were published May 1 in the journal Nature Communications.

“Objects like our hands are chiral, while objects like regular triangles are achiral, meaning they don’t have a handedness to them,” said Mason, the senior author of the study. “Achiral objects can be easily superimposed on top of one another.”

Why many of the important functional molecules in our bodies almost always occur in just one chiral form when they could potentially exist in either is a mystery that has confounded researchers for years.

“Our bodies contain important molecules like proteins that overwhelmingly have one type of chirality,” Mason said. “The other chiral form is essentially not found. I find that fascinating. We asked, ‘Could this biological preference of a particular chirality possibly have a physical origin?'” 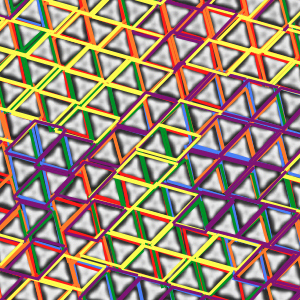 In addressing this question, Mason and his team sought to discover how chirality occurs in the first place. Their findings offer new insights into how the phenomenon can arise spontaneously, even with achiral building-blocks.

Mason and his colleagues used a manufacturing technique called lithography, which is the basis for making computer chips, to make millions of microscale particles in the shape of achiral triangles. In the past, Mason has used this technique to “print” particles in a wide variety of shapes, and even in the form of letters of the alphabet.

Using optical microscopy, the researchers then studied very dense systems of these lithographic triangular particles. To their surprise, they discovered that the achiral triangles spontaneously arranged themselves to form two-triangle “super-structures,” with each super-structure exhibiting a particular chirality.

In the image that accompanies this article, the colored outlines in the field of triangles indicate chiral super-structures having particular orientations.

So what is causing this phenomenon to occur? Entropy, says Mason. His group has shown for the first time that chiral structures can originate from physical entropic forces acting on uniform achiral particles. 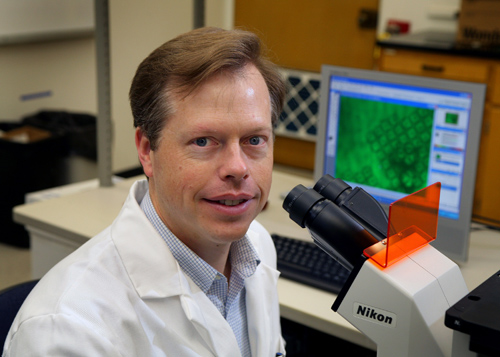 “It’s quite bizarre,” Mason said. “You’re starting with achiral components — triangles — which undergo Brownian motion and you end up with the spontaneous formation of super-structures that have a handedness or chirality. I would never have anticipated that in a million years.”

Entropy is usually thought of as a disordering force, but that doesn’t capture its subtler aspects. In this case, when the triangular particles are diffusing and interacting at very high densities on a flat surface, each particle can actually maximize its “wiggle room” by becoming partially ordered into a liquid crystal (a phase of matter between a liquid and a solid) made out of chiral super-structures of triangles.

“We discovered that just two physical ingredients — entropy and particle shape — are enough to cause chirality to appear spontaneously in dense systems,” Mason said. “In my 25 years of doing research, I never thought that I would see chirality occur in a system of achiral objects driven by entropic forces.”

As for the future of this research, “We are very interested to see what happens with other shapes and if we can eventually control the chiral formations that we see occurring here spontaneously,” he said.

“To me, it’s intriguing, because I think about the chiral preference in biology,” Mason added. “How did this chiral preference happen? What are the minimum ingredients for that to occur? We’re learning some new physical rules, but the story in biology is far from complete. We have added another chapter to the story, and I’m amazed by these findings.”

To learn more, a message board accompanies the publication in Nature Communications, an online journal, as a forum for interactive discussion.

This research was funded by the University of California. Kun Zhao, a postdoctoral researcher in Mason’s laboratory, made many key contributions, including fabricating the triangle particles, creating the two-dimensional system of particles, performing the optical microscopy experiments, carrying out extensive particle-tracking analysis and interpreting the results.

Along with Mason, co-author Robijn Bruinsma, a UCLA professor of theoretical physics and a member of the California NanoSystems Institute at UCLA, contributed to the understanding of the chiral symmetry breaking and the liquid crystal phases.