UCLA biochemists have mapped the structure of a key protein–RNA complex that is required for the assembly of telomerase, an enzyme important in both cancer and aging.

The researchers found that a region at the end of the p65 protein that includes a flexible tail is responsible for bending telomerase’s RNA backbone in order to create a scaffold for the assembly of other protein building blocks. Understanding this protein, which is found in a type of single-celled organism that lives in fresh water ponds, may help researchers predict the function of similar proteins in humans and other organisms.

The study was published June 14 in the online edition of the journal Molecular Cell and is scheduled for publication in the print edition on July 13.

The genetic code of both the single-celled protozoan Tetrahymena and humans is stored within long strands of DNA packaged neatly within chromosomes. The telomerase enzyme helps create telomeres — protective caps at the ends of the chromosomes that prevent the degradation of our DNA, said Juli Feigon, a UCLA professor of chemistry and biochemistry and senior author of the study. 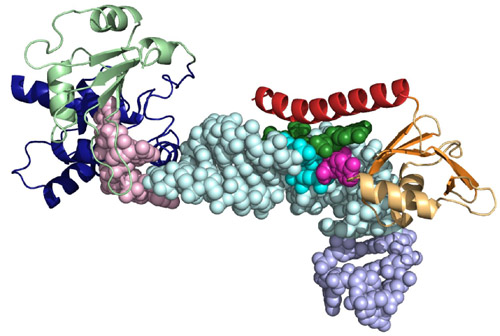 Each time the cell divides, the telomeres shorten, acting like the slow-burning fuse of a time bomb. After many divisions, the telomeres become eroded to a point that can trigger cell death.

Cells with abnormally high levels of telomerase activity constantly rebuild their protective chromosomal caps, allowing them to replicate indefinitely and become, essentially, immortal. Yet undying cells generally prove to be more of a curse than a blessing, Feigon said.

“Telomerase is not very active in most of our cells because we don’t want them to live forever,” said Feigon, who is also a researcher at UCLA’s Molecular Biology Institute and a member of the National Academy of Sciences. “After many generations, DNA damage builds up and we wouldn’t want to pass those errors on to subsequent cells.”

Overactive telomerase has potentially lethal consequences far beyond the propagation of erroneous DNA. The enzyme is particularly lively within cancer cells, which prevents them from dying out naturally. Finding a way to turn off telomerase in cancer cells might help prevent the diseased cells from multiplying.

Flipping the switch on telomerase might mean stopping it from forming in the first place, said Feigon. 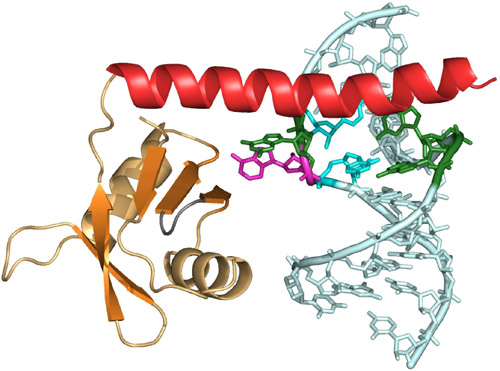 “Any time you want to stop an enzyme, you can target activity, but you can also target assembly,” she said. “If you keep it from assembling, that’s just as good as keeping it from being active, because it never even forms.”

While there is enormous interest in telomerase due to its connection to cancer and aging, very little is known about its three-dimensional structure or its formation, Feigon said.

Four years ago, UCLA postdoctoral scholar Mahavir Singh set out to determine how a strand of RNA and multiple proteins bind together to form telomerase. He set his sights on the p65 protein, one of the key components of the enzyme. Like many proteins, p65 is a long chain of both stiff and supple links that fold in upon one another in a prescribed pattern. At the very end of the p65 protein is a floppy, disordered tail.

“We knew the tail was important for the protein’s function, but it wasn’t clear how or why,” said Singh, first author of the current study. “From the structure, it became evident how it interacts with the telomerase RNA.” 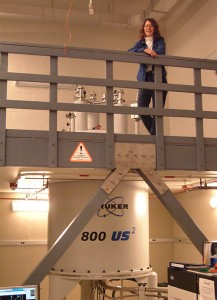 When Singh snipped off the flexible tail from p65, he found that the assembly of telomerase became severely limited. The tailless p65 simply couldn’t help put together the enzyme.

Using both X-ray crystallography and nuclear magnetic resonance spectroscopy, Singh probed the structure of the protein and its interaction with telomerase RNA. He found that upon assembly, the flexible tail transforms into a rigid crowbar that pries apart the strands of the RNA double helix. The newly altered protein tail bends the RNA into a new shape required for binding an essential component of telomerase, a protein called telomerase reverse transcriptase, or TERT.

The p65 protein not only brings two parts of the RNA closer together to allow for the attachment of the TERT protein, but it also folds around the end of the RNA strands to protect them before the telomerase assembles. Without its protein shield, the “naked” RNA is susceptible to degradation and could be chewed up by other enzymes, Singh said.

The p65 protein belongs to a family of “La-motif” proteins, molecules that act as “RNA chaperones” in many organisms including humans, said Feigon.

“How the p65 protein binds with RNA has never been clear,” Feigon said. “Nobody could figure it out, and that’s partly because they were missing a critical, extra part of the protein which changes from being a completely random coil to being folded and ordered when it interacts with RNA.” 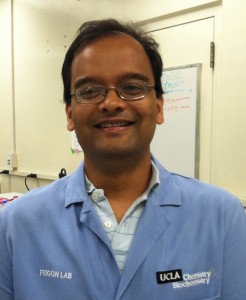 Studying p65 within the humble Tetrahymena may help Singh and Feigon better understand its La-motif cousins within the human body, which may also sport protein tails.

“A lot of data indicates that the protein tail is important for the binding of all kinds of RNAs in human cells,” Feigon said. “It is particularly critical for the translation of the hepatitis C viral RNA. Now we can potentially predict how those proteins will assemble and interact with their RNAs.”

The researchers who first discovered telomerase were awarded the Nobel Prize in 2009. They also used Tetrahymena thermophila, a tiny microorganism with hair-like flagella commonly found in fresh water.