UCLA Researchers Combat Global Disease with a Cell Phone, Google Maps and a Lot of Ingenuity

In the fight against emerging public health threats, early diagnosis of infectious diseases is crucial. And in poor and remote areas of the globe where conventional medical tools like microscopes and cytometers are unavailable, rapid diagnostic tests, or RDTs, are helping to make disease screening quicker and simpler.

RDTs are generally small strips on which blood or fluid samples are placed. Specific changes in the color of the strip, which usually occur within minutes, indicate the presence of infection. Different tests can be used to detect various diseases, including HIV, malaria, tuberculosis and syphilis. 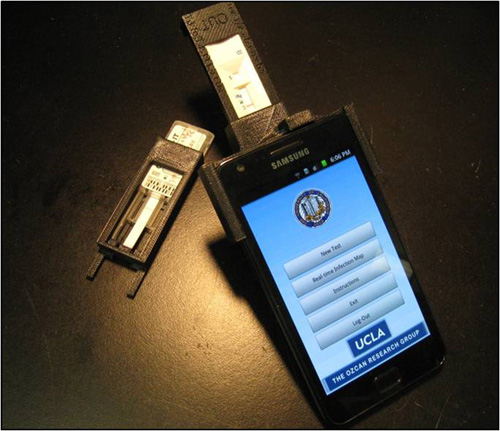 While the advantages of RDTs are significant — better disease-management, more efficient surveillance of outbreaks in high-risk areas and the ability of minimally trained technicians to test large number of individuals — they can also present problems.

“Conventional RDTs are currently read manually, by eye, which is prone to error, especially if various different types of tests are being used by the health care worker,” said Aydogan Ozcan, a UCLA professor of electrical engineering and bioengineering.

To address such challenges, Ozcan and his colleagues from the UCLA Henry Samueli School of Engineering and Applied Science and the California NanoSystems Institute at UCLA have developed a compact and cost-effective RDT-reading device that works in tandem with standard cell phones.

“What we have created is a digital ‘universal’ reader for all RDTs, without any manual decision-making,” he said.

The RDT-reader attachment, which clips onto a cell phone, weighs approximately 65 grams and includes an inexpensive lens, three LED arrays and two AAA batteries. The platform has the ability to read nearly every type of RDT. An RDT strip is inserted into the attachment, and with the help of cell phone’s existing camera unit and a special smart-phone application, the strip is converted into a digital image. 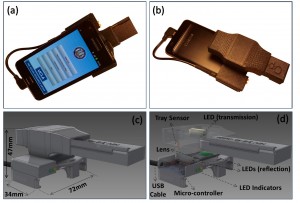 The platform then rapidly reads the digitized RTD image to determine, first, whether the test is valid and, second, whether the results are positive or negative, thus eliminating the potential errors that can occur with a human reader, especially one administering multiple tests of various test types. And because the color changes in RDTs don’t last more than a few hours in the field, the ability to store the digitized image indefinitely provides an added benefit.

After this step, the RDT-reader platform wirelessly transmits the results of the tests to a global server, which processes them, stores them and, using Google Maps, creates maps charting the spread of various diseases and conditions — both geographically and over time — throughout the world.

Together, the universal RDT reader and the mapping feature, which have been implemented on both iPhones and Android-based smart-phones, could significantly increase our ability to track emerging epidemics worldwide and aid in epidemic preparedness, the researchers say.

“This platform would be quite useful for global health professionals, as well as for policymakers, to understand cause–effect relationships at a much larger scale for combating infectious diseases,” Ozcan said.

The research is published in the journal Lab on a Chip. 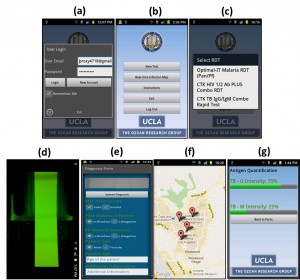 Additional authors of the study include Onur Mudanyali (first author), Stoyan Dimitrov, Uzair Sikora, Swati Padmanabhan, and Isa Navruz, all of the department of electrical engineering at the UCLA Henry Samueli School of Engineering and Applied Science.

Ozcan and his UCLA research team have been developing a variety of cell-phone attachments that utilize the digital components already embedded in standard cell phones to aid in the fight against global disease. With more than 5 billion cell-phone subscribers around the world today, cell phones can play a central role in telemedicine applications, and existing wireless telecommunications infrastructure presents new opportunities for innovative cloud-based health-monitoring and management platforms, the researchers say.