Before the digital age, neuroscientists got their information in the library like the rest of us. But the explosion of neuroscience research has resulted in the publication of nearly 2 million papers — more data than any researcher can read and absorb in a lifetime.

That’s why a UCLA team has invented research maps. Easily accessible through an online app, the maps help neuroscientists quickly scan what is already known and plan their next study.

The Aug. 8 edition of the journal Neuron describes these new tools.

“Information overload is the elephant in the room that most neuroscientists pretend to ignore,” said principal investigator Alcino Silva, a professor of neurobiology at the David Geffen School of Medicine at UCLA and professor of psychiatry at the Semel Institute for Neuroscience and Human Behavior at UCLA. “Without a way to organize the literature, we risk missing key discoveries and duplicating earlier experiments. Research maps will enable neuroscientists to quickly clarify what ground has already been covered and to fully grasp its meaning for future studies.” 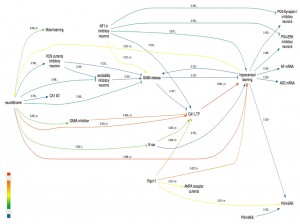 Silva collaborated with Anthony Landreth, a former UCLA postdoctoral fellow, to create maps that offer simplified, interactive and unbiased summaries of research findings designed to help neuroscientists in choosing what to study next. As a testing ground for their maps, the team focused on findings in molecular and cellular cognition.

Alcino Silva, professor of neurobiology at the David Geffen School of Medicine at UCLA and of psychiatry at the Semel Institute for Neuroscience and Human Behavior. (Image courtesy of UCLA Health System)

“We founded research maps on a crowd-sourcing strategy in which individual scientists add papers that interest them to a growing map of their fields,” said Silva, who started working on the problem nearly 30 years ago as a graduate student and who wrote, along with Landreth, an upcoming Oxford Press book on the subject. “Each map is interactive and searchable; scientists see as much of the map as they query, much like an online search.”

According to Silva, the map allows scientists to zero in on areas that interest them. By tracking published findings, researchers can determine what’s missing and pinpoint worthwhile experiments to pursue.

“Just as a GPS map offers different levels of zoom, a research map would allow a scientist to survey a specific research area at different levels of resolution — from coarse summaries to fine-grained accounts of experimental results,” Silva said. “The map would display no more and no less detail than is necessary for the researcher’s purposes.”

Each map encodes information by classifying it into categories and scoring the weight of its evidence based on key criteria, such as reproducibility and “convergence” — when different experiments point to a single conclusion.

The team’s next step will be to automate the map-creation process. As scientists publish papers, their findings will automatically be added to the research map representing their field.

According to Silva, automation could be achieved by using journals’ existing publication process to divide an article’s findings into smaller chapters and build “nano-publications.” Publishers would use a software plug-in to render future papers machine-readable.

A more direct approach would add special fields into the templates for journal article submission. The data resulting from these fields could be published in a public database, which would provide the foundation for research maps.

“Western societies invest an enormous amount into science, and research maps will optimize that investment,” Silva said. “One day, we will look back on the pre-map era of experiment planning with the same incredulity we now reserve for research conducted prior to statistics.”

The study was privately supported by The Discovery Fund.