Todd Dunlap, 62, arrived at Ronald Reagan UCLA Medical Center’s emergency room on Aug. 8 suffering from shortness of breath, fatigue and extreme cold. When a CT scan revealed a 24-inch clot stretching from his legs into his heart, doctors feared the mass could break loose and lodge in his lungs, blocking oxygen and killing him instantly.

Dr. John Moriarty gave his patient a choice. Dunlap could have open-heart surgery or undergo a new minimally invasive procedure using a device called AngioVac to vacuum the massive clot out of his heart. The catch? The procedure had never been successfully performed in California. 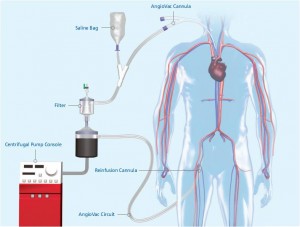 A new grandfather, Dunlap didn’t hesitate to choose the second option and underwent the procedure on Aug. 14. A week later, he was home, full of energy and eager to play on the floor with his 9-month-old grandson.

Here’s how it worked: A team of UCLA interventional radiologists and cardiovascular surgeons slid a tiny camera down Dunlap’s esophagus to visually monitor his heart. Next, they guided a coiled hose through his neck artery and plugged one end into his heart, against the clot. They threaded the other end through a vein at the groin and hooked the hose up to a powerful heart-bypass device in the operating room to create suction.

“Once in place, the AngioVac quickly sucked the deadly clot out of Mr. Dunlap’s heart and filtered out the solid tissue,” said Moriarty, a UCLA interventional radiologist with expertise in clot removal and cardiovascular imaging. “The system then restored the cleansed blood through a blood vessel near the groin, eliminating the need for a blood transfusion.” 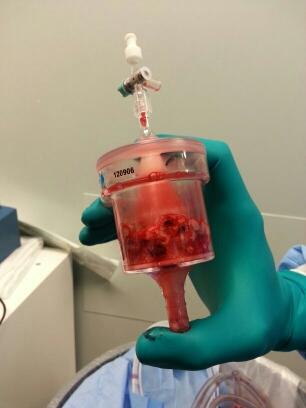 The procedure lasted three hours. Doctors observed Dunlap for three days in intensive care before transferring him to the hospital’s cardiac ward and then discharging him four days later. 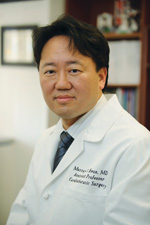 Open-heart surgery takes twice as long to perform and often requires the surgeon to divide the breastbone lengthwise down the middle and spread the halves apart to access the heart. After the heart is repaired, surgeons use wires to hold the breastbone and ribs in place as they heal. The procedure can necessitate extended rehabilitation before the patient makes a full recovery.

“Retrieving a clot from within the heart used to require open-heart surgery, resulting in longer hospitalization, recovery and rehabilitation times compared to the minimally invasive approach provided by the AngioVac system,” said Dr. Murray Kwon, a UCLA cardiothoracic surgeon who collaborated on Dunlap’s procedure.

Similarly, a clot-busting drug known as a tPA typically takes three to four days to work. In Dunlap’s case, his physicians tried tPA first, but it failed due to the clot’s large size and density.

“The AngioVac was the last resort for Mr. Dunlap,” said Moriarty. “The clot clogged his heart chamber like a wad of gum in a pipe. Every moment that passed increased the risk that the clot would migrate to his lungs and kill him. We couldn’t have asked for a better outcome.” 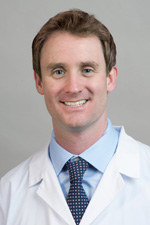 “I’m thrilled that I didn’t have to go through open-heart surgery,” said Dunlap, a resident of Newbury Park, Calif., who is the father of two adult sons. “This procedure is a great option for the older, frail person who wouldn’t survive open-heart surgery.  Without an alternative like this, he’s a goner.”

Like Dunlap, roughly one in 500 Americans suffers from blood clots in the leg veins, a condition called deep vein thrombosis. Estimates double in people older than 80. Nearly 100,000 Americans die each year when a clot breaks away from the blood-vessel wall and lodges in the lungs or heart. In one of every four cases, sudden death is the only clue an individual is suffering from the condition.

“When you hear about new cutting-edge options, it gives you hope,” said Cheryl Dunlap, who has been married to Todd for 32 years. “Without it, you run into a brick wall. If we’d consulted only with our community hospital and not a teaching facility like UCLA, we wouldn’t have learned about all the treatment choices available to us.”

“It takes a large team of experts to perform a potentially high-risk procedure like this for the first time,” Moriarty said. “We couldn’t have been successful without the collaboration of our colleagues in cardiac surgery, radiology, cardiology and anesthesia.”

For more information about the AngioVac or removing clots from the heart, legs, veins and lungs, please call the UCLA Radiology Consultation Center at 310-481-7545 or go to www.radiology.ucla.edu.