Researchers at the Georgia Tech Research Institute (GTRI) are poised to show the U.S. Army an advanced approach to enabling autonomous collaboration among dissimilar robotic vehicles.

GTRI’s CUSTD system will take part in Robotics Rodeo 2010, scheduled for Oct. 12-15 at Fort Benning, Ga. The Rodeo is hosted by the U.S. Army Tank Automotive Research, Development and Engineering Center (TARDEC), based near Detroit.  A number of invited robotic-research teams will demonstrate their work at the event.

“We believe our system represents the leading edge of demonstrating collaborative autonomous vehicle capabilities,” said Lora Weiss, a principal research engineer who is a member of GTRI’s Unmanned and Autonomous Systems team. “This system demonstrates not only the collaborative interoperability possible among dissimilar vehicles, but also the numerous sensing technologies that can be included onboard as interchangeable payloads — chemical and infrared sensors, still and video cameras, and sophisticated signal- and data-processing.” 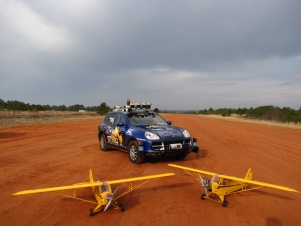 The aircraft require human guidance during takeoff, but while aloft they become autonomous for both navigation and target-locating tasks.  The Porsche — the same “Sting” vehicle entered by Georgia Tech in the DARPA Urban Challenge – is fully autonomous.

Fast-moving unmanned air vehicles, he explained, can find targets over a wide area, but their altitude and the limitations of their lightweight sensors can lessen the quality of gathered data. However, the UAVs can call in an unmanned ground vehicle – equipped with large, complex sensors and cameras — to analyze the target location more fully.

Personnel from several GTRI units have participated in the CUSTD effort, said Pippin, who like Weiss is a member of GTRI’s Unmanned and Autonomous Systems team. CUSTD’s current capabilities are based on extensive research and testing, including more than 50 test flights conducted at Fort Benning and other locations throughout the past year. 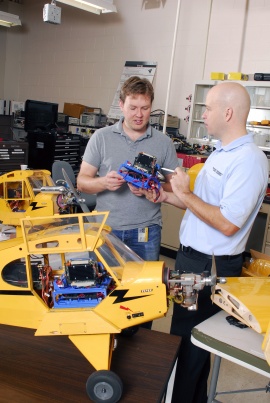 About the image: GTRI researchers Warren Lee, left, and Charles Pippin discuss an autonomy-payload device to be installed in an unmanned aerial vehicle (UAV) that is part of the CUSTD system. Image credit: Georgia Tech Research Institute (GTRI)

A demonstration opportunity such as the Robotics Rodeo, Pippin said, allows researchers to dramatize how well multiple autonomous robots can now collaborate.

“It’s hard to illustrate the effectiveness of collaborative interoperability and autonomy algorithms in a simulation,” he said.  “When onlookers see the technology demonstrated on hardware platforms, then it becomes very real.”

In a typical CUSTD scenario, the two aircraft search for an existing target over a wide area.  When one plane spots the target, it radios its location using GPS coordinates to the unmanned ground vehicle, which then finds its way around buildings and along roads to the target.

At the same time, the unmanned air vehicle over the target can ask the second aircraft to fly to the target and use its sensors to further analyze the situation. Such flexibility can be important, Pippin said, because UAVs are often outfitted with different sensors due to weight and cost considerations.

One technique that is still under development at GTRI — and is proving valuable for vehicle collaboration — is called market-based auctions, Pippin said.  This approach uses an “auction” type of algorithm that lets robotic vehicles “bid” on a given task. Using this method, unmanned vehicles can autonomously divide up work on the spot in the most efficient way.

In an auction-technology scenario, an unmanned air vehicle over a target might send out a bid to other nearby UAVs, asking which among those airplanes that are outfitted with a particular sensor is closest to the target.  The UAV that best complies with both requirements – equipment and proximity — wins the bid.

In a GTRI experiment, unmanned air vehicles using a market-based approach reduced the travel required to complete a task by nearly 50 percent.  The result was a substantial saving in both time and fuel.

“By developing these systems to be STANAG and JAUS compliant, we’re building in future interoperability with other unmanned systems produced by different vendors,” Weiss said.  “If upcoming systems are going to be able to communicate, as well as operate with the control-system designs now being developed, they’ll need to be standards compliant.”

The CUSTD system also makes use of FalconView™, a Windows-based mapping application developed by GTRI for the Department of Defense. FalconView supports many map types, such as aeronautical charts, satellite images and elevation maps.  FalconView can be used by a ground-based station to monitor and control the system.

In the past several years, GTRI has been bringing autonomous vehicle research under one umbrella that includes all aspects of systems-payload, sensor, autonomy logic and collaborative operations. Research now also includes unmanned underwater vehicles and space vehicles.

The Robotics Rodeo will consist of two separate events. The Extravaganza is open to the public.  The Robotic Technology Observation, Demonstration and Discussion (RTOD2), closed to the public, allows research teams to demonstrate their technologies to government observers and contractors.