UA Study’s Findings Key to Understanding Immunity as We Age

Researchers at the University of Arizona College of Medicine – Tucson have found a key to understanding the aging immune system’s decreased response to infectious diseases, which remain among the leading causes of death in older adults.

Aging profoundly affects the immune system’s T cells – the types of white blood cells that defend against intracellular pathogens, such as viruses, intracellular bacteria or parasites, such as malaria. Newly encountered pathogens are attacked by what are known as naïve T cells, some of which then learn and remember, becoming memory T cells that prevent reinfection when they encounter the same pathogen again. But naïve T cells become depleted with age, leading to less effective immune responses against new infections.

Researchers in the UA Department of Immunobiology and the UA’s Arizona Center on Aging discovered that two separate defects combine to contribute to reduced T cell responses with aging: a reduction in the number of naïve T cell precursors (cells that develop into naïve T cells) and an impaired ability of virtual memory T cells to multiply. They also found that T cell receptor, or TCR, signals are crucial not only to the maintenance of naïve T cells but also for the emergence of virtual memory CD8+ T cells. T cells with CD8+ receptors recognize and attack virus-infected cells. 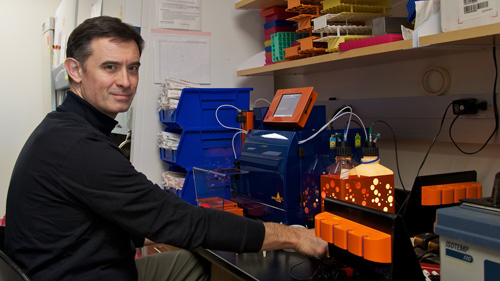 Dr. Janko Nikolich-Žugich and other UA researchers are learning more about why immune system response declines with age. Image credit: University of Arizona

“The findings will be important for our understanding of potential immune intervention in older adults,” said Kristin R. Renkema, a lead author of the study. “A robust T cell response against new infection is critical for optimal protective immunity against a variety of pathogens; reduced numbers of one type of the responding cells and impaired function of another type of the responding cells clearly can result in reduced, absent or ineffective immune responses.”

Renkema is a postdoctoral research associate in the laboratory of Dr. Janko Nikolich-Žugich, professor and chairman of the UA Department of Immunobiology and senior and corresponding author of the study.

“This study shows that one major cause of T cell aging is linked to sub-threshold signals that naïve T cells receive from their T cell receptors, which lead them to not only become virtual memory cells but also to slowly ‘burn’ their ability to divide in response to infectious challenge,” said Nikolich-Žugich, who also is co-director of the Arizona Center on Aging, Elizabeth Bowman Professor in Medical Research at the UA College of Medicine – Tucson, and a member of the UA BIO5 Institute.

The study, “Two Separate Defects Affecting True Naive or Virtual Memory T Cell Precursors Combine to Reduce Naive T Cell Responses with Aging,” has been published onlineand is available in the Jan. 1 print edition of The Journal of Immunology, a publication of the American Association of Immunologists. The study also is recognized as a Research Highlight in Nature Reviews Immunology, Jan. 2014, Vol. 14 No. 1.

This work was supported by U.S. Public Health Service grants AG020719 and N01 AI00017 from the National Institutes of Health. which were awarded to Nikolich-Žugich.