UA professor Sheri Bauman, an expert in cyberbullying, is among those invited to attend the launch of Lady Gaga’s Born This Way Foundation, a nationwide education and advocacy organization.

University of Arizona researcher Sheri Bauman is a member of a small, but powerful, nationwide contingency invited to participate in the launch of Lady Gaga’s new anti-bullying foundation.

Lady Gaga and her mother, Cynthia Germanotta, will officially unveil the Born This Way Foundation, an education and advocacy foundation on Feb. 29 at Harvard University. 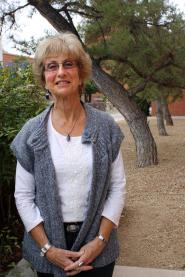 Sheri Bauman will join other researchers and also policymakers, advocates, youth leaders and distinguished guests at the launch event for Lady Gaga's Born This Way Foundation. Prior to earning her doctorate in 1999, Bauman, a cyberbullying scholar, served three decades working in public schools. Of that time, nearly 20 years were spent as a school counselor. (Photo credit: Beatriz Verdugo/UANews)

“Lady Gaga has a large public presence and following, and her support for anti-bullying efforts will attract attention to the problem and hopefully fund efforts to address the problem,” said

Bauman will join about 60 other invitees – policymakers, researchers advocates and distinguished guests that include Oprah Winfrey, Deepak Chopra and Secretary Kathleen Sebelius.

The launch event is a joint project of between the John D. & Catherine T. MacArthur MacArthur Foundation and Harvard’s Berkman Center for Internet and Society and Graduate School of Education.

“My daughter’s foundation was born out of her passion to create a better world where people are kinder and nicer to one another and are accepted for who they are, regardless of how different they may be,” Germanotta said in a prepared statement.

“She has experienced many of the struggles that our youth encounter today and identifies with the lasting effects they can have without proper support,” Germanotta also said. “Together, we look forward to creating a new movement that will engage and empower youth and accept them as valuable members of our society.”

The launch coincides with an invitation-only symposium around six major themes and for which attendees submitted relevant works and papers, which may lead to future collaborations.

Specifically, the symposium is designed to focus on “youth meanness and cruelty, including the topics of bullying, drama and harassment” and to determine necessary actions and strategies for the foundation to consider in actively working against harassment and bullying.

“It is important that everyone realize that although some students are resilient, being victimized by bullying has many serious negative consequences, such as decreased academic performance, increased absenteeism, increased rates of anxiety and depression and social withdrawal, which persist into adulthood,” Bauman said.

Biased-based bullying is particularly damaging, said Bauman, also a professor in the UA College of Education‘s disability and psychoeducational studies department and a licensed psychologist.

And bystanders are not immune to harm; they may become fearful that they will be the next target, or feel guilty because they knew the behavior was wrong and they did not intervene.

Bauman also pointed to recent studies that have shown that bystanders are powerful in stopping bullying if they take action – like standing up and speaking out when an incident occurs.

“This is more likely to happen in a school environment that subscribes to a school-wide comprehensive anti-bullying ethos,” she added. “Adult modeling of civility and respect is important as well.”