A new laser being commercialized puts out spectrally tunable light, from ultraviolet to far infrared.

The University of Arizona has licensed a new tunable laser technology invented in the College of Optical Sciences to startup TPhotonics Inc. While most lasers produce beams of a single or highly limited range of wavelength, the technology allows for devices that can produce a beam and tweak its wavelength on the fly.

The invention is a new kind of VECSEL, or vertical external-cavity surface emitting laser, which can generate spectrally tunable light and multiple wavelengths, from the ultraviolet (UV) to the far infrared (IR) regions of the spectrum. 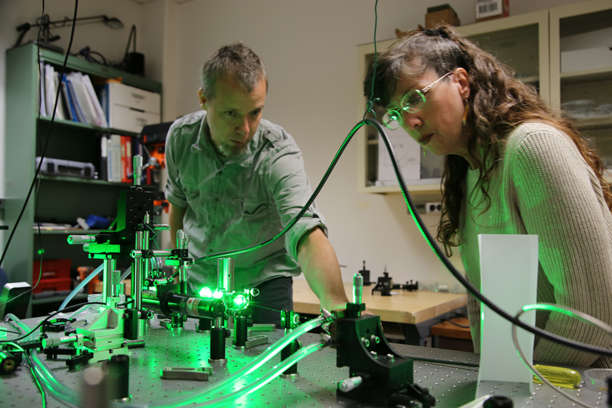 Hessenius notes that today’s lasers — while used in a large number of technologies — leverage only a relatively small number of wavelengths for very limited applications.

“We use them in CDs and DVDs, in telecommunications and metal cutting, for example,” he says. “It’s very specific uses.”

The new technology will open the door to exploring applications for yet-unexplored wavelengths.

“We have the potential to do what other people can’t, such as in long-range sensors or specific medical applications like cleaning plaque out of arteries,” Hessenius says. “These industries are looking for very specific wavelengths, and we’ll be able to make it easier to produce and test those wavelengths.”

Tech Launch Arizona, the office of the UA that commercializes inventions stemming from University research, provided services to facilitate the protection of the intellectual property, the license to TPhotonics and the creation of the company — the office’s sixth startup of the 2017 fiscal year.

The startup team is building on a strong foundation of success, having already been awarded five substantial grants: one NSF I-Corps award to understand who potential customers might be and what they want; three Small Business Innovation Research grants, known as SBIRs, in progress and totaling $450,000; and another SBIR grant that was completed 18 months ago. The SBIR grants all were awarded to develop ways to produce lasers in the UV, green, and mid- and far-infrared ranges, filling spectral gaps in the current laser technology marketplace.

“I like to build things that no one has ever built before,” says Hessenius, whose passion lies in research and invention. “Commercialization is a wonderful way to create impact from what we invent, so having TLA at the UA is great because they help us through that entire process.”

Ultimately, TPhotonics is aiming to develop and manufacture what are known as T-cavity tunable lasers. The goal is to create a product line that can produce lasers that are easily tailored for use at specific wavelengths for various applications, as well as for lasers that can be tuned around a central output wavelength for applications that require end-user tuning.

“We want to be a major manufacturer, a supplier to the builders of larger systems,” Hessenius says. “We’re building prototypes through the contracts we have now, and we plan to complete those projects and have products available by the end of the year.”

During this period, Hessenius will lead the initial growth of the company. Eventually, TPhotonics will fill out its business leadership team, allowing Hessenius to migrate into a role more focused on his primary expertise in science and technology innovation.

Amy Phillips, the TLA licensing manager dedicated to the College of Optical Sciences, worked with the inventors to identify the intellectual property, and facilitated the process of integrating the various members of the TLA tech transfer and business development teams to help create the startup and license the invention.

“The really exciting thing about this tunable laser,” Phillips says, “is that it’s going to create beams at wavelengths that have not been produced before and open up new markets that need those wavelengths. Having the ability to explore all these new applications at such a rapid pace is going to allow us to advance the use and impact of laser technologies in industry, medicine and so much more.”