UA Engineer Predicts Materials Failure From the Tiniest of Grains

Researcher Katerina Aifantis is probing mechanical processes at the nanoscale with a grant from the U.S. Department of Energy.

Then, at 21, Aifantis became the Netherlands’ youngest-ever recipient of a doctorate — in applied physics.

Now at 30, and in her fourth year as associate professor of civil engineering and engineering mechanics at the University of Arizona, Aifantis has reached another milestone: She is principal investigator on a nanotechnology-based collaborative research project between the UA and Michigan Technological University.

With a three-year, renewable award of nearly $840,000 from the U.S. Department of Energy Office of Basic Energy Sciences, which started July 15, Aifantis is studying and predicting how metallic solids break down at the atomic level. 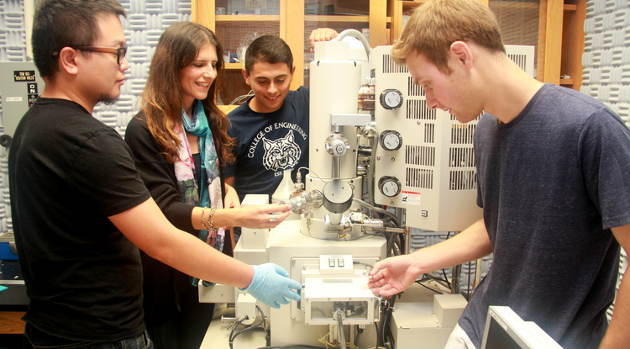 “What happens at the atomic level when we compress metals for microelectronics? Do the metals grow harder or softer? We are taking many approaches and drawing from many disciplines to answer questions like these,” Aifantis said.

In collaborating with Stephen Hackney, her former professor at Michigan Tech, Aifantis is studying plasticity, one of the most vexing problems in mechanical engineering, in which elements or mechanical stresses introduced to solid materials cause deformations that affect the materials’ strength and electrical and thermal conductivity — softening or strengthening steel, for example.

“Katerina has a certain courageous curiosity that allows her to step into new areas or attempt new ways of analyzing phenomena,” said Hackney, who has co-authored papers and a book with Aifantis. “Our collaborative grant with the DOE came about because of her novel thinking about an old topic.”

In manufacturing, elements such as silicon, phosphorus and carbon are added to iron to produce alloys with enhanced properties. In the process, atoms at the interface between individual crystals, or grains, shift position, which can alter mechanical processes and lead to material failure.

Aifantis is developing theoretical frameworks and performing computer simulations and experiments to model, understand and predict the mechanical and chemical changes at the boundaries, or interfaces, of these nanosized grains. She and Hackney are fabricating and experimentally testing new alloys based on Aifantis’ predictions.

It is basic science, but with potentially lifesaving implications.

“By understanding and modeling mechanics at the atomic level, we can help manufacturers develop alloys for more effective jet-engine turbines, or tiny batteries for medical implants that won’t crack or run down prematurely, or car components that better withstand high-speed crashes,” Aifantis said.

Aifantis was raised in Greece and Michigan, where noted scientists and engineers, including Nobel laureates, frequently visited her family. She said she took an interest in her field after trying to understand her father’s work.

Elias Aifantis, her father, is a Michigan Tech professor emeritus of mechanical engineering and professor of mechanics at Aristotle University of Thessaloniki in Greece, where he helped establish the school as a center for theoretical material mechanics.

“I was always asking him about the gradient plasticity theory he formulated, and I even tried studying it with him when I was at Michigan Tech, but we never managed to talk science for more than 10 minutes,” Katerina said. “We could only act as father-daughter and not professor-student. He encouraged me to study mechanics on my own.”

After earning her Bachelor of Science, Aifantis won a National Science Foundation graduate research fellowship to study at the University of Cambridge, where she developed a novel theory on grain boundaries with her adviser, John Willis.

Aifantis completed her doctoral requirements in about a year, but because Cambridge required three years for a doctorate, she got her master’s at Cambridge and went to the University of Groningen in the Netherlands for her doctorate. There, with professor of materials science Jeff De Hosson as her adviser and Willis as her co-adviser, she advanced her work on grain boundaries and completed her doctorate the next year.

“I’m delighted to learn of Katerina’s latest success in winning a substantial grant from the Department of Energy, particularly because it represents a further advance along a line that she and I established when she was an amazingly young Ph.D. student,” said Willis, now professor emeritus of theoretical solid mechanics at Cambridge. “She has all of the qualities — technical ability, drive, management skills — to make a great success of it.”

Aifantis conducted postdoctoral research with leading scientists in Paris and St. Petersburg, Russia, and at Cambridge and Harvard universities before learning, at 24, that she had become the youngest-ever winner of a European Research Council starting grant for $1.5 million.

In publications such as Science and Physics Today, and by the BBC and other international news outlets, she has been dubbed “innately brilliant,” “ahead of her time,” “in a league of her own” and “a bright new star in the scientific firmament.”