November is Native American Heritage Month. The UA will celebrate with a variety of events, kicking off on Friday.

With one of the largest Native American student populations in the Southwest, the UA has more than 1,000 students who identify as Diné or Navajo, Tohono O’odham, Pascua Yaqui, Hopi, Cherokee and other Native nations.

There will be a noon kickoff event Friday at the UA Mall Stage with opening remarks by Raji Rhys, assistant vice president and chief diversity officer, who will read a proclamation from UA President Ann Weaver Hart designating November as Native American Heritage Month at the University. A traditional performance of songs, dances and prayers will follow.

Events include a free basketry festival on the lawn of the Arizona State Museum on Saturday, a presentation by World War II Navajo code talker Thomas Begay on Nov. 20, seminars on current Native American issues Nov. 8, 12 and 15, and a panel discussion featuring tribal leaders from the Gila River Indian Community, Hopi Tribe and Navajo Nation on Nov. 14. Times, dates and locations are available here. 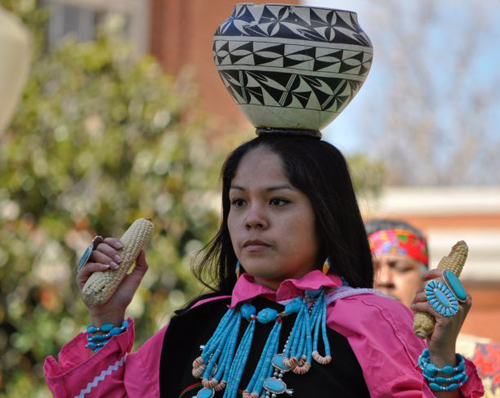 The Native Eyes Film Showcase starts Nov. 9 with “Winter in the Blood” and appearances by the director, Alex Smith, and the star, Chaske Spencer from the “Twilight” series. The film festival will be held at The Loft Cinema and the UA Center for Creative Photography and is sponsored by the Arizona State Museum. There also will be a filmmaking workshop with Melissa Henry at the Pascua Yaqui Education Center. More information is available on the Arizona State Museum website.

Native American Heritage Month concludes at the UA with a health fair and festival at the Mel and Enid Zuckerman College of Public Health on Nov. 21 and a Native American-themed fashion show Nov. 22 presented by the Pima Community College Native American Student Affairs Club.

Some program highlights include:

“Seeking Water From the Sun,” an Emmy Award-winning AZPM original production, looks at the drama of science and the reality of life on the Navajo Nation. It explores the trials and tribulations faced by University of Arizona scientists designing and building a solar-powered water distillation prototype, the first step of a plan to purify groundwater for easier access for the Navajo people and their livestock. The documentary addresses the dire drought within the Navajo Nation and how UA scientists are exploring using solar energy as a source of clean water for the tribe.

Independent Lens: “Indian Relay“follows the trials and triumphs of a Native American horse-racing season in the Rocky Mountain West. Representative teams of the Shoshone-Bannock nation from Idaho and the Crow and Blackfeet Nations of Montana go head to head in competition. Intense action plays out as rival nations battle towards the Indian relay horse-racing national championship.

“Apache 8,” tells the story of the all-women wildland firefighting crew from the White Mountain Apache Tribe. These extraordinary women have been fighting fires on the reservation and throughout the United States for more than 30 years. With humor and tenderness, four women from different generations of the Apache 8 crew share their personal stories.

“Kind Hearted Woman,” a touching two-part documentary by David Southerland, tells the story of an Oglala Sioux woman, a 32-year-old single mother, who must rebuild a life for her family after years of sexual abuse by her ex-husband. Through her journey she finds inner strength and returns to her reservation in an effort to help other members of her tribe who have also been victims of abuse.

“Sitting Bull: A Stone in My Heart,” featured at film festivals across the United States, gives viewers a more intimate look at one of the most prominent figures in Native American history, Lakota Sioux chief Sitting Bull. “Sitting Bull: A Stone in My Heart” was made possible by historians Robert M. Utley and Donald Fixio, who served as advisers on the film. Using speeches, interviews and photographs, filmmakers were able to construct an accurate representation of Sitting Bull’s life.

“Injunuity” uses animation, music and the voices of real people to tell nine short stories about the world infused with guidance from a Native American perspective. Topics discussed include language preservation, sacred sites and the environment.