U of T Discovery Holds Promise of Cheaper, Greener Drugs

A chemistry team at the University of Toronto has discovered environmentally-friendly iron-based nanoparticle catalysts that work as well as the expensive, toxic, metal-based catalysts that are currently in wide use by the drug, fragrance and food industry.

“It is always important to strive to make industrial syntheses more green, and using iron catalysts is not only much less toxic, but it is also much more cost effective,” said Jessica Sonnenberg, a PhD student and lead author of a paper published this week in the Journal of the American Chemical Society.

Catalysts, compounds that affect and improve the efficiency of chemical reactions, are an indispensible part of the processed food and drug industries. From that instant cup of soup, chock full of preservatives and “natural” flavours, to the ibuprofen that soothes your aching head – many of the products around us rely on catalysts. 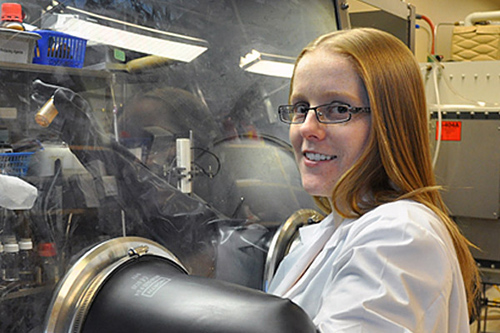 The research, directed by Professor Robert Morris, chair of the Department of Chemistry, involved several steps. Suspecting the existence of nanoparticles, the team first set out to identify the iron catalysts. They then conducted investigations using an electron microscope to confirm that the iron nanoparticles were actually being formed during catalysis. The next step was to ensure that the iron nanoparticles were the active catalytic agents. This was done with polymer and poisoning experiments which showed that only the iron atoms on the surface of a nanoparticle were active.

But a further challenge remained.

“Catalysts, even cheap iron ones developed for these types of reaction, still suffer one major downfall,” explained Sonnenberg. “They require a one-to-one ratio of very expensive organic ligands – the molecule that binds to the central metal atom of a chemical compound – to yield catalytic activity.

“Our discovery of functional surface nanoparticles opens the door to using much smaller ratios of these expensive compounds relative to the metal centres,” Sonnenberg said. “This drastically reduces the overall cost of the transformations.”

The research team included Neil Coombs at U of T’s Centre for Nanostructure Imaging and Imagetek Analytical Imaging Inc., and Paul Dube of the Brockhouse Institute for Materials Research at McMaster University in Hamilton, Ontario. Funding was provided by the Natural Sciences and Engineering Research Council of Canada as a Discovery grant to Morris and as an Alexander Graham Bell Canada Graduate Scholarship and Vanier Scholarship to Sonnenberg.