When Patricia Sloane-White speaks of Muslim Delaware, she’s often met with a look of disbelief from students, from members of the community, from colleagues who all ask the same question: Well, where is it?

“Right here,” she answers. “We don’t have to go to the Middle East to learn how Muslim people live in the modern world today.”

In fact, Sloane-White, has developed a course to “bring people face-to-face with the people who make up Muslim Delaware.”

Anthropology 267 is composed of 15 undergraduates, nearly half of whom had some familiarity with the Middle East, either through coursework or study abroad, and another half who admittedly “knew nothing and wanted to learn more.” 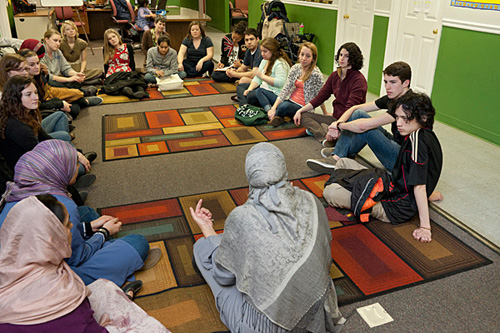 In a new UD anthropology course, "Muslim Delaware," students learn from and interact with the men, women and children who practice Islam in the state. Photo by Evan Krape

Co-taught by Sloane-White, an anthropology professor and director of Islamic Studies, and her colleague, Amna Latif, whose husband is a professor in the Alfred Lerner College of Business and Economics, the course, appropriately titled “Muslim Delaware,” is about communicating with and learning from others, “the essence of humanistic anthropology and Islamic social relations.”

In addition to classroom discussions, the class participates in site visits, which have included visiting the Islamic Society of Delaware to learn about prayer, the mosque and its role in the community; the Masjd Al Kauthar to better understand the Black American Muslim experience; and the Taribyah School to study and witness the role of the private Islamic school.

On a separate outing—a meeting with the Tarbiyah Sisters Group—the students and Muslim women all sat in a circle on the floor.

“This is the way the Prophet sat,” explained Miriam, president of the Tarbiyah School Board and leader of the weekly women’s group. “It’s a way to bring us closer together,” she added, as the class and community began an extensive discourse on women in Islam. 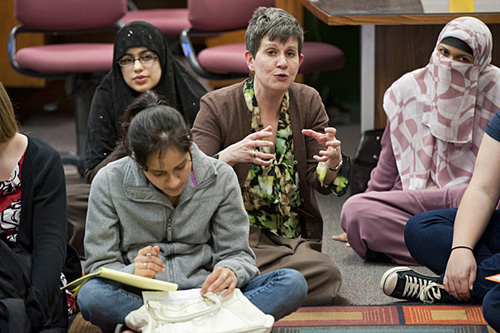 In a new UD anthropology course, "Muslim Delaware," led by Patricia Sloan-White (asking a question), students learn from and interact with the men, women and children who practice Islam in the state. Photo by Evan Krape

Active participation in the course is mandatory. All students are required to keep an anthropological field journal and the course also maintains a closed Facebook page, in which students share articles, post videos, and comment on their reactions to class discussions, required readings and field trips.

Early in the semester, one student uploaded a photo from “the only mosque I’ve visited so far” from his hometown of Taipei, Taiwan.

Essentially, the Facebook group is a chance to continue the conversation and a forum to ask questions.

“Why does the person doing the call to prayer cover their ears with their hands,” asks one student. “Does the Quran specifically define men and women’s natures,” asks another. “Is a Muslim widow allowed to remarry if she has children?”

While Sloane-White and Latif answer some questions, they leave the discussions largely open-ended to the other students. Even the site visits are primarily exchanges between students and community leaders, with the professors listening far more then lecturing.

“As an anthropologist, one conversation is in some ways worth a semester of reading,” says Sloane-White. “What I find most amazing is the absolute willingness and degree of engagement from both students and the community.”

“The students have a real desire to know more,” she adds. “And we’ve been welcomed—literally embraced—by the community, who say, ‘Please come again. Learn more. Understand and get to know us.’”