Two-timing Spacecraft Has Date with Another Comet

NASA’s Stardust spacecraft, equipped with the University of Chicago’s Dust Flux Monitor Instrument (DFMI), is hurtling at more than 24,000 miles an hour toward a Valentine’s Day encounter with comet Tempel 1.

Stardust will approach to within 124 miles of Tempel 1 at 10:56 p.m. CST Monday, Feb. 14. The spacecraft flew within 150 miles of comet Wild 2 in 2004, when it collected thousands of tiny dust particles streaming from the comet’s nucleus for laboratory analysis.

The spacecraft dropped off the samples in a canister that parachuted onto the desert salt flats of Utah in January 2006 following a journey of approximately 3.5 billion miles. But Stardust, still healthy and with fuel to spare, soon went back onto the interplanetary market, looking for a second mission. 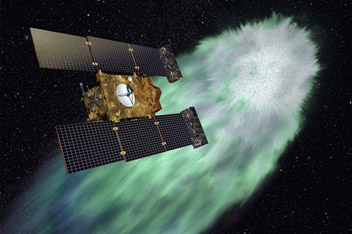 An artist envisions what the approach of NASA’s Stardust-NExT (New Exploration of Tempel) spacecraft may look like when it arrives at Comet Tempel 1 on Valentine’s Day. The University of Chicago’s Dust Flux Monitor Instrument will be among the instruments collecting data from Tempel 1, the first comet to be visited twice by spacecraft. Image credit: NASA

The mission will be the first to allow Thanasis Economou, Senior Scientist at UChicago’s Enrico Fermi Institute, and his fellow members of the Stardust-NExT (New Exploration of Tempel) science team to look for changes on a comet’s surface that occurred following an orbit around the sun. They will compare Stardust’s data from Tempel 1 with findings from a previous probe that also studied that comet.

“We are very excited that we can visit a second comet—comet Tempel 1—with the same spacecraft after we visited the Wild 2 comet in 2004,” Economou said. “The Dust Flux Monitor Instrument is healthy and ready to take another look at this comet.”

Stardust had only one sample-return canister, so this time the spacecraft will be unable to capture cometary dust for analysis back on Earth. Few at the time thought that the spacecraft would be able to visit another comet, “but even so, we are looking forward to seeing what kind of results we will get,” Economou said.

Sizing up a new crater

They also are interested in obtaining photographs of the crater left on Tempe 1 by a probe launched from the Deep Impact spacecraft in July 2005. The 817-pound copper-aluminum probe generated so much dust that the spacecraft was unable to obtain images of the crater following impact. Such images would permit scientists to estimate the new crater’s depth and diameter. 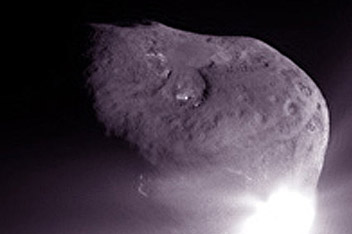 The Deep Impact spacecraft took this image of Comet Tempel 1 (3.7 miles in diameter) in July 2005, shortly after a probe from the spacecraft hit the comet’s surface. Image credit: NASA

The impact enabled scientists to study the composition of Tempel 1, a Jupiter-family comet whose orbit has been modified by close passages to the planet. Stardust now has the opportunity to collect additional data on how Jupiter-family comets formed and evolved.

The DFMI was developed by Economou and the late John Simpson, the Arthur Holly Compton Distinguished Service Professor Emeritus in Physics, and the late Anthony Tuzzolino, Senior Scientist in UChicago’s Fermi Institute.

The instrument detected as many as several hundred particles each second during Stardust’s flyby of comet Wild 2 in January 2004. Most of those particles measured no more than a few microns in diameter, too small to see with the naked eye. Just a few measured more than 10 microns, about one-fifth the diameter of a human hair.

Tempel 1 has displayed less surface activity than did Wild 2, “but we are going there with a higher velocity, so probably the flux will be equal to or a little more than we had during the Wild 2 encounter,” Economou said. 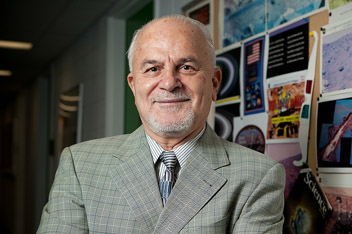 Thanasis Economou, Senior Scientist at UChicago’s Enrico Fermi Institute, is a member of the Stardust-NExT science team. UChicago’s Dust Flux Monitor Instrument aboard Stardust will collect data for 30 minutes during the Feb. 14 flyby of comet Tempel 1. “The DFMI seems to be fine after traveling almost 11 years in space. We are ready to meet the comet,” Economou said. Image credit: Jason Smith

The Tempel 1 flyby likely will be the last assignment for Stardust, which is running low on fuel after logging almost 3.7 billion miles in space since its launch in 1999. Economou, meanwhile, will continue his collaborations on NASA’s Mars Exploration Rover mission and the Cassini mission to Saturn. He also is working to establish a new astronomical observatory near his childhood home in Ziakas, Greece.