LOS ANGELES – 26 Nov 2012: Twilight: Breaking Dawn – Part 2 continued to infiltrate the Twitterverse during Thanksgiving weekend, with competition from Box Office leaders Skyfall and the newly released, Rise of the Guardians – according to the University of Southern California (USC) Annenberg Innovation Lab and the IBM Film Forecaster, a Social Sentiment Index.

The project evaluated over five million tweets over a time period of 11 days and compared the volume around Twilight: Breaking Dawn, to other movies in theaters, such as the next installment of James Bond, Skyfall, Wreck-It Ralph, Flight, and The Man with the Iron Fists, all of which opened one to two weeks prior to Twilight. The analysis also included sentiment around new Thanksgiving weekend releases including Life of Pi, Red Dawn, and Rise of the Guardians. 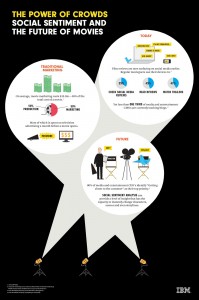 The Power of Crowds: The Social Sentiment and the Future of Movies. Image credit: IBM

On Sunday, November 25, Box Office Mojo revealed Twilight generated approximately $64 million in ticket sales over the holiday weekend (Wednesday-Sunday) – 22 percent of the total revenue for the biggest Hollywood holiday weekend on record. The Twitter results over the 11 days offered a different perspective:

“In the past, box office receipts indicated success or failure. Thanks to advances in analytics, movie makers now have the ability to analyze the public sentiments of their viewers in real time,” said Professor Jonathan Taplin, Director of the USC Annenberg Innovation Lab. “With technologies such as the Film Forecaster, movie studios such as Lionsgate can go beyond receipts, to truly understand the voice of the crowd.”

The collaboration between USC Annenberg and IBM is part of an ongoing initiative to demonstrate how advanced analytics technologies applied to big data can help Chief Marketing Officers (CMOs) in the sports, entertainment, retail, and news industry derive valuable insights from online public sentiment.

“Today, Box Office results and industry accolades are not the sole drivers of recognition across the movie community – real-time audience sentiment is a strong factor too,” said Steve Canepa, General Manager of Media and Entertainment, IBM. “Organizations in the Media and Entertainment industry are now taking advantage of big data to better understand their audience and to deliver better products, services and marketing campaigns that ultimately drive greater results for their business.” 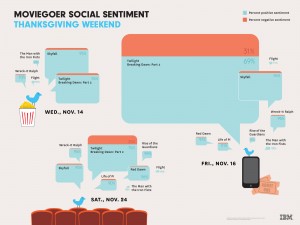 Event: A Night Behind the Movies

On Wednesday, November 28, IBM and USC Annenberg will host a Consumer Sentiment Event, featuring a panel of experts in the movie industry. Movie enthusiasts and media and entertainment representatives have the opportunity to submit questions around social sentiment and the future of film using #moviebizbuzz or via Facebook. Selected questions will be asked during the event and answered by the following panelist:

About the IBM Social Sentiment Index

The IBM Social Sentiment Index uses advanced analytics and natural language processing technologies to analyze large volumes of social media data in order to assess public opinions. The Index can identify and measure positive, negative and neutral sentiments shared in public forums such as Twitter, blogs, message boards and other social media, and provide quick insights into consumer conversations about issues, products and services. Representing a new form of market research, social sentiment analyses offer organizations new insights that can help them better understand and respond to consumer trends. IBM’s social sentiment capabilities are delivered on an industry-leading big data platform that can access, store and analyze any data regardless of how fast it is moving, what type it is, or where it resides. For more information about IBM Social Sentiment Index, please visit www.ibm.com/social-sentiment. Follow the conversation at #IBMIndex on Twitter.