American flag is in the fireplace – burning, not the portrait of George Washington, Thomas Jefferson or Abraham Lincoln – it’s one of the world’s top known figure Bin Laden – Laden’s portrait is hanging from the wall, Michelle Obama looks like on her way to Jihad (against whom??) and the turban-wearing (Muslim) Senator Obama giving her wife a huge feedback. Is there anything missing? May be not, but this cartoon was the Sunday cover illustration of the New Yorker magazine. 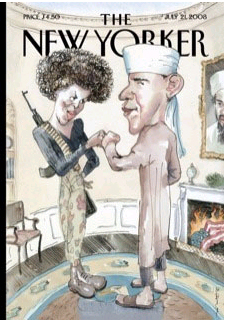 Michelle and Barack Obama on Sunday cover illustration of the New Yorker magazine.

If you draw a bottom line, then Obama is a Muslim and the couple is terrorist. Of course, they will work against U.S interest while being stationed at the Oval Office.

But is this only a ‘satire’? There’s a die-hard campaign going on against Barack Obama that sometimes call him a Muslim, sometimes depicting Michelle Obama as ‘anti-white’ and a lot more. So the Obama campaign launched the site to fight the smears.

It’s unfortunate that in a world that is moving with a rocket-speed development in technology and mass communication, cartoons are often drawn to incite religious or racial hatred or discrimination.

But what’s the truth about Obama? As CNN wrote citing a Newsweek poll that 12% believe Obama was sworn in as a U.S Senator on Quran and 26% believe he was raised as a Muslim. But ‘neither is true’. That’s the truth.