ARMONK, NY & NOTTINGHAM, UK – 24 Mar 2016: IBM’s World Community Grid and scientists at the University of Nottingham are launching a study to address tuberculosis, one of the world’s most deadly diseases. It is expected that hundreds of thousands of volunteers will donate vast computing resources to aid this effort facilitated by IBM.

Launched today, the new “Help Stop TB” project on IBM World Community Grid will model aspects of the behavior of tuberculosis bacteria to better understand its potential vulnerabilities that new medicines may one day exploit. Volunteers will make the processing power on their devices available, when otherwise not being used, to perform the millions of calculations necessary for these simulations. Crowdsourcing a virtual supercomputer in this manner to study the disease will provide results significantly faster and achieve greater results than relying on conventional computational resources typically available to researchers. 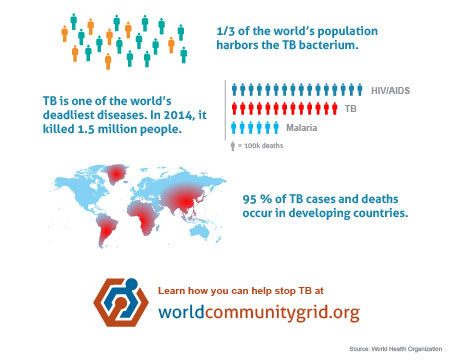 IBM’s World Community Grid launched the “Help Stop TB” project `led by the University of Nottingham in the UK. The aim is to help science better understand the TB bacterium, so that more effective treatments can be developed. (Image credit: IBM)

Tuberculosis (TB) has plagued humans for thousands of years. Approximately one third of the globe’s human population harbors TB today and 1.5 million people died from it in 2014, prompting the World Health Organization to rank TB alongside HIV as the world’s deadliest infectious disease.

Dr. Anna Croft, lead researcher of the Help Stop TB project and Associate Professor, Faculty of Engineering at the University of Nottingham in the UK, says that “TB is one of the world deadliest infectious diseases, along with HIV, and one third of the world’s population harbors the TB bacterium. My team will use World Community Grid to help science better understand the TB bacterium, so we can develop more effective treatments, and eventually eradicate this threat to human health.”

Although several drugs and a partially effective vaccine have been developed to help combat TB, the TB bacterium can evolve to resist available medicine, particularly when patients interrupt or discontinue treatment, which often occurs when they do not have consistent access to medications and medical care. Nearly half of European cases are now resistant to at least one drug, and 4% of all cases worldwide are resistant to treatment regimens that combine drugs. HIV patients with weakened immune systems are especially vulnerable to TB.

Tuberculosis can be a slow killer, often dormant for long periods of time before exploiting poor nutrition, old age or a weakened immune system to become active. It is most often spread through the air when an infected person coughs, sneezes, laughs or even talks. Symptoms can start with cough, weight loss, and fever, developing into breathing difficulties and violent coughs that bring up blood. Initially residing in the lungs, it can spread to, and cripple, other organs.

The tuberculosis bacterium has a coating which shields it from many drugs and the patient’s immune system. Among the fats, sugars and proteins in this coat are fatty molecules called mycolic acids. The Help Stop TB project will use the computing power donated by World Community Grid members to simulate the behavior and chemical properties of mycolic acids to better understand how they protect the TB bacteria. Scientists hope to use the results to eventually develop better treatments for this deadly disease, particularly those that evade TB cell wall defenses.

World Community Grid was created in 2004 by IBM as part of its citizenship program focused on innovation. Hosted on IBM’s SoftLayer cloud technology, World Community Grid facilitates massive amounts of completely free computing power for scientists by harnessing the surplus cycle time of volunteers’ computers and Android devices from all over the globe. The combined power available on World Community Grid has created one of the most powerful and fastest virtual supercomputers on the planet.

“Thanks to World Community Grid’s massive computational power, we can study many different mycolic acid structures instead of just a few,” says Dr. Croft. “This type of analysis at this scale would otherwise be impossible.”

More than three million computers and mobile devices used by nearly three quarters of one million people globally and 470 institutions from 80 countries have contributed virtual supercomputing power that have fueled more than two-dozens vitally important projects on World Community Grid over the last 11 years. Since the program’s inception, World Community Grid has enabled important scientific advances in areas such as cancer research, AIDS treatments, genetic mapping, solar energy and ecosystem preservation. Many of these efforts might not have even been attempted without the free supercomputing power provided by IBM’s World Community Grid. World Community Grid is enabled by Berkeley Open Infrastructure for Network Computing (BOINC), an open source platform developed at the University of California, Berkeley and with support from the National Science Foundation.

Volunteers can help stop TB by joining World Community Grid. IBM also invites researchers to submit research project proposals to receive this free resource, and encourages members of the public to donate their unused computing power to these efforts at worldcommunitygrid.org. For more information about IBM’s philanthropic efforts, please visit www.citizenIBM.com or follow @CitizenIBM on Twitter. And for up to the minute media alerts about University of Nottingham, follow @UoNPressOffice on Twitter.

The University of Nottingham has 43,000 students and is ‘the nearest Britain has to a truly global university, with a “distinct” approach to internationalization, which rests on those full-scale campuses in China and Malaysia, as well as a large presence in its home city.’ (Times Good University Guide 2016). It is also one of the most popular universities in the UK among graduate employers and the winner of ‘Outstanding Support for Early Career Researchers’ at the Times Higher Education Awards 2015. It is ranked in the world’s top 75 by the QS World University Rankings 2015/16, and 8th in the UK by research power according to the Research Excellence Framework 2014. It has been voted the world’s greenest campus for three years running, according to Greenmetrics Ranking of World Universities.