Treatment For TB Can Be Guided By Patients’ Genetics

A gene that influences the inflammatory response to infection may also predict the effectiveness of drug treatment for a deadly form of tuberculosis.

An international collaboration between researchers at the University of Washington in Seattle, Duke University, Harvard University, the Oxford University Clinical Research Unit in Vietnam and Kings College London reported these findings Feb. 3 in the journal Cell.

These results suggest the possibility of tailoring tuberculosis treatment, based on a patient’s genetic sequence at a gene called LTA4H, which controls the balance between pro-inflammatory and anti-inflammatory substances produced during an infection.

Tuberculosis can take hold if disease-fighting inflammation is either too weak or too strong. The strength of the response is in part the result of a person’s LTA4H gene sequence. Knowing whether a patient has the gene sequence for one extreme response or the other could help guide medication decisions. 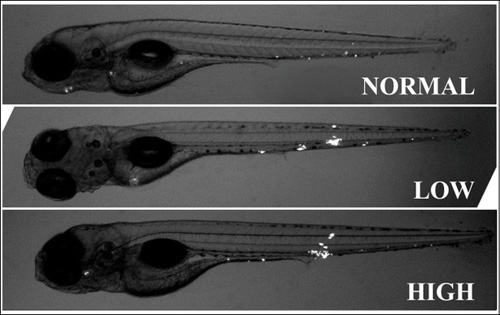 This microscopic image shows zebrafish larvae infected with fluorescently labeled bacteria related to those that cause TB in humans. The wildtype (normal) fish has optimal inflammation and is able to control infection well. In contrast, its siblings have been altered to produce either low or high levels of key mediators of inflammation. Producing too little or too much of these mediators results in difficult keeping the infection under control. Image credit: Francisco Roca

Dr. Lalita Ramakrishnan, professor of microbiology, medicine and immunology at the University of Washington and the senior author of the study, said that the study suggested that that increased TB disease severity in humans can occur for fundamentally opposite reasons.

“The ability to tailor therapies to these divergent inflammatory states, based on a patient’s sequence at LTA4H, could improve patient outcomes,” she said.

This important observation for people began with a study of the tiny zebrafish. In these animals, the researchers linked mutations in the zebrafish version of the LTA4H gene to increased susceptibility to a TB-like infection. Dr. David Tobin, now on the faculty of the Department of Molecular Genetics and Microbiology at Duke University, is first author of the study.  He performed the research while he was a postdoctoral fellow in the University of Washington laboratory of Dr. Ramakrishnan, working closely with another postdoctoral fellow Francisco Roca.

King commented “Throughout human history, people with both forms of the LTA4H gene have probably been more likely to survive when exposed to TB than people with only one form of the LTA4H gene.  This advantage may have led to both forms of the gene persisting in human populations. Selection by infectious diseases has had an enormous impact on the evolution of our species.”

This surprising finding, the researchers noted, implicated both insufficient and overly abundant inflammation as different ways TB could take hold in the body.  By analyzing clinical data from patients in Vietnam with a particularly severe form of TB called TB meningitis, the researchers found that anti-inflammatory therapy only benefited patients with the gene sequence that corresponds to excess inflammation. The patients with the insufficient inflammation gene sequence derived no benefit from what has been adopted as a standard therapy for TB meningitis.

Given the clinical and therapeutic implications of these findings, the researchers sought the underlying molecular mechanisms for both extremes. For this they turned back to the zebrafish.

In collaboration with Dr. Charles Serhan, of Harvard University they showed  that one gene variant weakened inflammation through the overproduction of substances called lipoxins. Hyperinflammation results from a gene variant that leads to an excess of leukotriene B4.  Either can interfere with the overall levels of tumor necrosis factor, a substance that, when present in normal amounts, protects against TB infection and other diseases.

Paradoxically, either a deficiency or an overkill of tumor necrosis factor can cause macrophages, the host cells that gobble up pathogens, to die by bursting and releasing the TB pathogens into a “permissive extracellular milieu where they can grow exuberantly into corded mats” the researchers said.

The researchers concluded, “If patients succumb to TB for two fundamentally different reasons, then it is imperative to design therapeutic strategies that reflect this dichotomy. For example, if evaluating the treatment effects of dexamethasone on TB meningitis doesn’t take into account host genotype, the very substantial benefits of the drug for the high-reactive genotype may be diluted by its neutral or possibly detrimental effects on individuals with the low-activity genotype.”

A simple gene test for the high-responding variant, they said, could provide a rapid, inexpensive way to determine which patients would benefit from dexamethasone therapy added to standard infection-fighting drugs. They also believe clinical studies are urgently needed to be sure patients with the low-reactive genotype are not harmed by unnecessary dexamethasone treatment, and to find alternative treatment strategies for this group, such as agents that limit lipoxin production or boost inflammation.

Because the basic inflammatory biochemical pathways affected by the LTA4H gene are common to many infections, the researchers said TB treatment strategies suggested by their findings may hold promise for other serious infections.

The study was funded by grants from the National Institutes of Health, an American Cancer Society postdoctoral fellowship, a Mallinckrodt Scholar Award, a postdoctoral fellowship from the educational ministry of Spain, the Northwest Regional Center of Excellence for Biodefense and Emerging Infectious Diseases, the Burroughs Wellcome Fund, the Wellcome Trust, the American Skin Association, the Dermatology Foundation, and the Chinese Academy of Sciences.