Too Much of a Good Thing: Human Activities Overload Ecosystems with Nitrogen

*Resulting ecological damage is serious, but could be reduced by wider use of more sustainable, time-honored practices*

Humans are overloading ecosystems with nitrogen through the burning of fossil fuels and an increase in nitrogen-producing industrial and agricultural activities, according to a new study. While nitrogen is an element that is essential to life, it is an environmental scourge at high levels.

According to the study, excess nitrogen that is contributed by human activities pollutes fresh waters and coastal zones, and may contribute to climate change. Nevertheless, such ecological damage could be reduced by the adoption of time-honored sustainable practices.

Appearing in the October 8, 2010 edition of Science and conducted by an international team of researchers, the study was partially funded by the National Science Foundation. 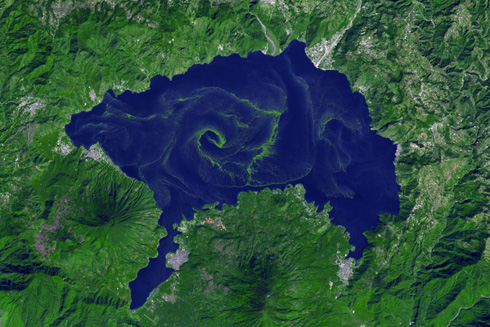 About the image: At Lake Atitlan in Guatemala, excess nitrogen promotes algae growth, which leads to eutrophication. Over-nourished by excess nutrients including nitrogen, which drains from nearby farms, swirls of blue-free algae form. The eventual decay of the algae robs the water of oxygen, and thereby creates a dead zone where other plants and animals cannot survive. Image credit: NASA Earth Observatory image by Jesse Allen, based on data from the NASA/GSFC/METI/ERSDAC/JAROS, and U.S./Japan ASTER Science Team

According to the Science paper, since pre-biotic times, the nitrogen cycle has gone through several major phases.  The cycle was initially controlled by slow volcanic processes and lightning and then by anaerobic organisms as biological activity started. By about 2.5 billion years ago, as molecular oxygen appeared on Earth, a linked suite of microbial processes evolved to form the modern nitrogen cycle.

Human Impacts on the Nitrogen Cycle

But the start of the 20th century, human contributions to the nitrogen cycle began skyrocketing. “In fact, no phenomenon has probably impacted the nitrogen cycle more than human inputs of nitrogen into the cycle in the last 2.5 billion years,” says Paul Falkowski of Rutgers University, a member of the research team.

“Altogether, human activities currently contribute twice as much terrestrial nitrogen fixation as natural sources, and provide around 45 percent of the total biological useful nitrogen produced annually on Earth,” says Falkowski. Much of the human contributions of nitrogen into ecosystems come from an 800 percent increase in the use of nitrogen fertilizers from 1960 to 2000.

Another problem: Much of nitrogen fertilizer that is used worldwide is applied inefficiently. As a result, about 60 percent of the nitrogen contained in applied fertilizer is never incorporated into plants and so is free to wash out of root zones, and then pollute rivers, lakes, aquifers and coastal areas through eutrophication. (Eutrophication is a process caused by excess nutrients that depletes oxygen in water bodies and ultimately leads to the death of animal life.)

In addition, some reactions involving nitrogen release nitrogen oxide into the atmosphere. Nitrogen oxide is a greenhouse gas that has 300 times (per molecule) the warming potential of carbon dioxide. In addition, nitrogen oxide destroys stratospheric ozone, which protects the earth from harmful ultraviolet (UV-B) radiation.

“Natural feedbacks driven by microorganisms will likely produce a new steady-state over time scales of many decades,” says Falkowski. “Through this steady state, excess nitrogen added from human sources will be removed at rates equivalent to rates of addition, without accumulating.”

But meanwhile, the Earth’s population is approaching 7 billion people, and so ongoing pressures for food production are continuing to increase. “There is no way to feed people without fixing huge amounts of nitrogen from the atmosphere, and that nitrogen is presently applied to crop plants very ineffectively.” says Falkowski.

“While the processes of eutrophication have been recognized for many years, only recently have scientists been able to begin placing the anthropogenic processes in the context of an understanding of the broader biogeochemical cycles of the planet,” says Robert Burnap, an NSF program director. This is an important article because it concisely develops this understanding and also provides reasonable predictions regarding the economic and policy dimensions of the problem.”