In 1923 the Flaming Cliffs of the Gobi Desert yielded one of the most-celebrated finds of paleontology. Entombed in sun-baked sandstone was a collection of oval-shaped oddities: the first dinosaur eggs known to science. This 75-million-year-old find would be followed by others, providing a glimpse into the lives of these ancient creatures that no skeleton could.

Since that discovery, fossilized dinosaur eggs and nests have been recovered from sites around the world, as have the bones of tiny hatchlings and even tinier embryos. These discoveries are allowing scientists to unlock the mysteries of dinosaur reproductive and social behavior, such as: Were dinosaurs social animals? Did they care for their young? What was life like for baby dinosaurs?

“Tiny Titans: Dinosaur Eggs and Babies,” a multimedia, hands-on exhibition open Feb. 8–Aug. 30 at the Yale Peabody Museum, answers these questions and many others.

In addition to seeing and, in some cases, touching these fossils, visitors to “Tiny Titans” will learn about their important scientific value. They will see life assemblages of baby dinosaurs frozen in time at the moment of their demise. One such display from China, “Early Ceratopsian Dinosaur Nursery — Fossil Life Assemblage,” shows a herd of 34 very young psittacosaurs, all about the same age, intertwined in a group with one adult. All the skulls are above the mass of bodies as they would have been in life.

Another highlight is the extremely rare embryonic skin preserved inside an egg, a scientific first. Fossils of embryos are among the rarest of dinosaur remains but the fossilization of soft tissue such as skin is even more unusual because the tissue usually decays soon after death and burial. This rare glimpse into the past enables scientists to visualize the skin of the living animal. 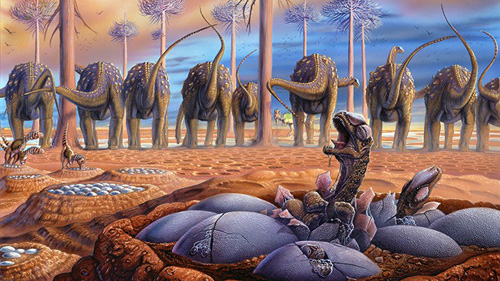 A short film tells the story of the discovery of “Baby Louie,” one of the first known “articulated” dinosaur embryos — meaning Louie’s fossilized bones are intact and lying in the same position as they would have been in life. A cast of Louie’s bones and a feathered reconstruction are on display.

Also featured are eggs from “living dinosaurs,” such as the ostrich, emu, and hummingbird, as well as an eggshell fragment from the extinct elephant bird Aepyornis, which laid the largest egg ever known, a cast of which is on display. It was at the Peabody that curator and Yale professor John Ostrom advanced his theory, now overwhelmingly accepted, that birds are the living descendants of small, meat-eating dinosaurs.

“Giant Oviraptor Hatchling ‘Baby Louie’”: Baby Louie is one of the first known articulated dinosaur embryos, meaning Louie’s fossilized bones are intact and lying in the same position as they would have been in life. Image credit: Yale University

Rare and unusual specimens on display from the Peabody collections include a selection of modern bird eggs and nests from penguins,  loons, emus, hummingbirds, and more. In addition, live emus will be hatching right in the exhibit. This portion of the exhibition was curated by Richard Prum, curator of vertebrate zoology at the Peabody and the William Robertson Coe Professor of Ecology & Evolutionary Biology at Yale.

The exhibition was developed by the Stone Company, Colorado, and augmented for this venue with the Peabody’s rare egg and nest collections. Support for Tiny Titans was provided by the 2013-2014 O.C. Marsh Fellows of the Yale Peabody Museum.

The Yale Peabody Museum of Natural History, located at 170 Whitney Ave., is open 10 a.m–5 p.m. Monday-Saturday; and noon to 5 p.m. on Sunday. It is closed Easter Sunday and July 4. Admission is $9 for adults, $8 for seniors, and$5 for children ages 3-18 and college students with I.D. Children under age 3 are admitted for free, as are all visitors on Thursdays 2–5 p.m. from September through June.