This complex investigation required the use of high-resolution sidescan sonar and remotely operated underwater vehicles to locate sea disposed munitions in water as deep as 1,500 feet. The SOEST’s Hawaiʻi Undersea Research Laboratory’s (HURL) two three-man PISCES research submersibles were deployed to validate the results of sonar data and take water and sediment samples in areas where military munitions were found.

“We know from archived records thousands of military munitions were sea disposed at HI-05.  There were also some indications that as many as 16,000 M47 100-pound bombs containing approximately 73 pounds each of the chemical agent mustard were disposed in the area,” said Dr. Margo Edwards.

“The systematic approach that we developed in collaboration with personnel from the U.S. Army and private industry (Environet, Inc.) allowed us to identify more than 2,000 munitions on the seafloor in the study area. With assistance from the HURL, samples collected within a few feet of several munitions provided the study team the ability to assess the potential impact of sea disposed munitions on human health and the ocean environment, as well as to assess the impact of the ocean environment on sea disposed munitions.” 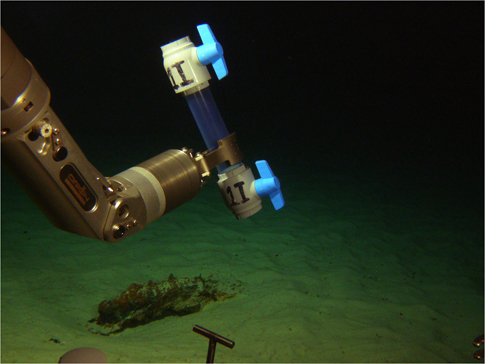 About the image: Water sampler designed by UH to collect sea water. Image credit: University of Hawaiʻi at Mānoa.

Sediment, water and biological samples were analyzed at the University of Hawaiʻi at Mānoa and independent laboratories on the mainland for munitions constituents, including explosive compounds like TNT, chemical agents and their breakdown products, and metals.

The HI-05 project report has six major conclusions, which may be summarized as:

Tad Davis, Deputy Assistant Secretary of the Army for Environment, Safety and Occupational Health stated, “University of Hawaiʻi at Mānoa’s School of Ocean Earth Science and Technology (SOEST) and the quality team it assembled exceeded our expectations performing an extremely complex study with scientific rigor. By providing the Army with demonstrated, proven procedures for characterizing and assessing a munitions disposal site, SOEST has made a significant contribution to the Department of Defense’s understanding of the potential effects of historic sea disposal sites on the ocean environment and those that use it.”

The University of Hawai’i at Mānoa undertook this project in partnership with Department of Defense’s National Defense Center for Energy and the Environment. The National Oceanic and Atmospheric Administration and Environet, a local environmental engineering firm, consulted with the University of Hawaiʻi at Mānoa on the project. The U.S. Army’s Edgewood Chemical Biological Center provided chemical safety and analytical support for the project.

The final report is available on the project website at: www.hummaproject.com.

*Source: University of Hawaii at Manoa.