The Agulhas Current which runs along the east coast of Africa may not be as well known as its counterpart in the Atlantic, the Gulf Stream. But now researchers are taking a closer look at this current and its “leakage” from the Indian Ocean into the Atlantic Ocean–and what that may mean for climate change.

In results of a study published in this week’s issue of the journal Nature, a team of scientists led by University of Miami Rosenstiel School of Marine & Atmospheric Science Oceanographer Lisa Beal, suggests that Agulhas leakage could be a significant player in global climate variability.

The Agulhas Current transports warm and salty waters from the tropical Indian Ocean to the southern tip of Africa. There most of the water loops around to remain in the Indian Ocean (the Agulhas Retroflection), while some water leaks into the fresher Atlantic Ocean via giant Agulhas rings.

Once in the Atlantic, the salty Agulhas leakage waters eventually flow into the Northern Hemisphere and act to strengthen the Atlantic overturning circulation by enhancing deep-water formation.

Recent research points to an increase in Agulhas leakage over the last few decades, caused primarily by human-induced climate change.

The finding is profound, oceanographers say, because it suggests that increased Agulhas leakage could trigger a strengthening in Atlantic overturning circulation–at a time when warming and accelerated meltwater input in the North Atlantic has been predicted to weaken it.

“This could mean that current IPCC model predictions for the next century are wrong, and there will be no cooling in the North Atlantic to partially offset the effects of global climate change over North America and Europe,” said Beal.

“Instead, increasing Agulhas leakage could stabilize the oceanic heat transport carried by the Atlantic overturning circulation.” 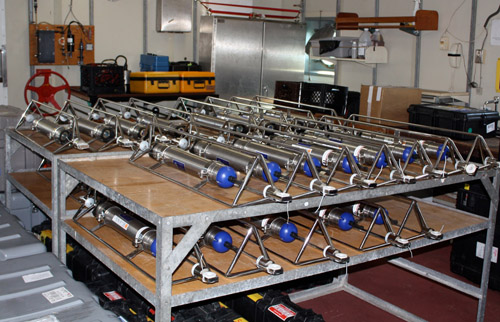 There are also paleoceanographic data to suggest that dramatic peaks in Agulhas leakage over the past 500,000 years may have triggered the end of glacial cycles.

These data are further evidence that the Agulhas system and its leakage play an important role in the planet’s climate, Beal and others say.

“This study shows that local changes in atmospheric and oceanic conditions in the Southern Hemisphere can affect the strength of the ocean circulation in unexpected ways,” said Eric Itsweire, director of the National Science Foundation (NSF)’s physical oceanography program, which funded the research.

“Under a warming climate,” said Itsweire, “the Agulhas Current system near the tip of South Africa could bring more warm salty water from the Indian to the Atlantic Ocean and counteract opposing effects from the Arctic Ocean.” 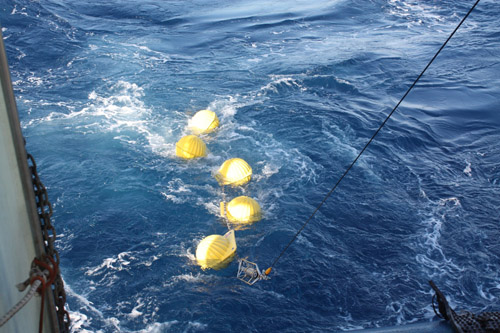 The study establishes the need for additional research in the region that focuses on Agulhas rings, as well as on the leakage, believes Beal.

Climate modeling experiments are critical, she said, and need to be supported by paleoceanographic data and sustained observations to firmly establish the role of the Agulhas system in a warming climate.

“Our goal now is to get more of the scientific community involved in research on the Agulhas system and its global effects,” said Beal. “The emphasis has been too long in the North Atlantic.”

Beal, who serves as chief scientist, spent one month aboard the research vessel Knorr in the southwest Indian Ocean deploying oceanographic instruments.

The data gathered in situ, when combined with along-track satellite information, will help increase our understanding of how the Agulhas system is changing in a warming climate, Beal said.

It also included members of the Scientific Committee for Oceanic Research (SCOR) Working Group 136 on the Climatic Importance of the Agulhas System, sponsored by SCOR, the International Association for the Physical Sciences of the Oceans, and the World Climate Research Program.

For information on the program, please visit the ACT website.