From the Beginning, the Mind Knows the Difference Between Night and Day

The brain is apparently programmed from birth to develop the ability to determine sunrise and sunset, new research on circadian rhythms at the University of Chicago shows.

The research sheds new light on brain plasticity and may explain some basic human behaviors, according to Brian Prendergast, associate professor in psychology, and co-author of a paper published April 27 in the journal PLoS One. The lead author is August Kampf-Lassin, an advanced graduate student at the University.

“This finding may show us why infants of many species eventually learn to discriminate daytime from nighttime,” said Prendergast, a researcher on biological rhythms.

In a series of experiments, researchers were able to show that although the ability to see visual stimuli, such as movement, is lost when a developing eye is not exposed to light, the ability to determine light and dark cycles was not affected. The ability to make that distinction between night and day develops as an animal grows, they found. 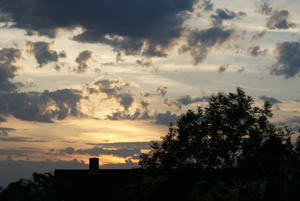 New research shows that brain’s ability to determine day-night rhythms in the environment is probably an innate feature of development.

Other research has found that primates as well as humans adapt naturally to a rhythm of sleeping during the night. But this research shows that the pathway in the circadian system that allows synchrony between the brain and day-night rhythms in the environment is probably an innate feature of development, he said.

“For the first time, we have established that the ability to coordinate circadian rhythms with daily changes in light exposure is not subject to very much plasticity at all — that it is not influenced by changes in the amount of light the brain receives during development,” Kampf-Lassin said.

The results of the study are reported in the article “Experience-Independent Development of the Hamster Circadian Visual System,” which was drawn from a series of challenging experiments with hamsters.

Shortly after the hamsters’ eyes opened, but before they were exposed to light, experimenters placed a contact lens that completely blocked light over one of their eyes. Keeping one eye shut and one open, called monocular deprivation, is a standard method scientists use to study use-dependent plasticity of visual development.

The hamsters then grew up in a light-dark cycle such that only the non-deprived eye was able to send light information into the brain. In adulthood, the lenses were removed, and the function of the hamsters’ previously deprived eye was assessed. The researchers found that the hamsters’ brains were blind to all classical visual stimuli presented to the deprived eye, such as food or moving stimuli.

Nevertheless, the deprived eye perfectly retained the hamsters’ ability to synchronize their circadian rhythms of activity with the 24-hour day. Thus, even though the hamsters could not see objects with the deprived eye, they could use input from the eye to set their internal clocks. The study also showed that long-term monocular deprivation did not affect anatomical projections from the eye to the circadian clock in the brain, and light-induced changes in gene expression in the circadian clock were also normal.

“It’s interesting to see how some aspects of behavioral development are hard-wired and develop into adult-typical patterns, even in the total absence of normal environmental input to the system,” Prendergast said.

Other authors on the paper were Jenny Wei and Jerome Galang, undergraduates at the University.