Thick-skinned dinosaur gets the last laugh

In life, Tyrannosaurus rex usually got the best of the less fearsome duck-billed dinosaurs, or hadrosaurs: T. rex ate them.

But in death, the plant-eating hadrosaurs have proved more resilient than their carnivorous predators — and apparently all other dinosaurs — at least by the measure of their skin.

In an exhaustive new survey of dinosaur skin samples and a related statistical analysis, Matt Davis of Yale University documents the prevalence of hadrosaur skin among all known dinosaur skin fossils, and offers a new explanation for it: Hadrosaur skin was tougher.

“If you are a hadrosaur versus another dinosaur, you’re 31 times more likely to preserve skin,” said Davis, a fifth-year graduate student in paleontology at Yale and the author of a paper published in the Sept. 10 print issue of the journal Acta Paleontologica Polonica.

Previous explanations for the relative abundance of hadrosaur skin fossils attributed it to the sheer number of hadrosaurs among all dinosaurs. Hadrosaurs — many species of which are characterized by protuberant crests on their heads — were among the most common worldwide.

Other explanations attributed the frequent occurrence of hadrosaur skin in the fossil record to hadrosaurs’ lifestyle — they tended to live (and die) along rivers, where flash flooding could quickly bury them in alluvial sediments, protecting the corpse from scavengers.

But Davis presents evidence that, he argues, rules out these traditional explanations in favor of something special about hadrosaurs’ skin. 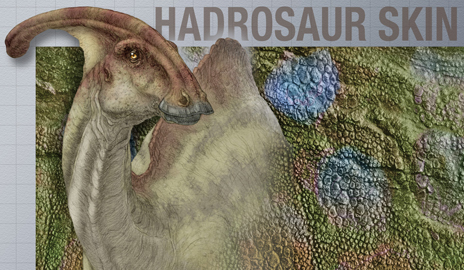 At right is a reconstruction of what the skin of hadrosaur Edmontosaurus annectens might have looked like, based on the famous hadrosaur mummy at the American Museum of Natural History in New York City. (Illustration by Patrick Lynch)

Davis reviewed every published scientific report of dinosaur skin from 1841 through 2010 — 180 reports in all (representing a greater number of individual skin samples) — to determine the prevalence of hadrosaur skin relative to other dinosaur skin. Of 123 body fossils with skin (as opposed to trace fossil skin, such as footprints), 57 — or 46% — were from hadrosaurs.

Additionally, Davis analyzed data describing 343 dinosaurs from the Hell Creek Formation in Montana and the Dakotas, one of the world’s richest deposits of dinosaur fossils, and similar formations in the United States and Canada. Of 343 individuals, 80 were hadrosaurids, or about 23%. And of the 80 hadrosaurids, 20 — fully 25% — bore evidence of skin.

Of the other 263 other (non-hadrosaur) Hell Creek dinosaurs, representing about a dozen large dinosaur species, only two individuals showed evidence of skin. One was a thescelosaur, and one was a tyrannosaur.

Other evidence suggests that environmental factors and the size of the hadrosaur population do not explain why traces of their skin are more common than that of other dinosaurs, Davis said. While hadrosaurs were great in number, for instance, other dinosaurs, such as ceratopsians(including Triceratops and Torosaurus), were more numerous, yet left behind far less skin — or none at all. In the Hell Creek Formation, ceratopsians outnumber hadrosaurs 2:1.

Moreover, hadrosaur skin has been found in a variety of environments, not only ancient river valleys. Similarly, many other dinosaur species found in (formerly) watery areas contain no trace of skin.

And hadrosaurs not only tend to leave behind skin more often, Davis said, but also in greater abundance: Most mummy dinosaurs — which preserve most of the body skin — are hadrosaurs, he said.

Skin offers scientists the possibility of a deeper understanding of dinosaurs than fossilized bones alone, which represent the overwhelming majority of physical evidence of dinosaurs. Skin can help distinguish species and determine where and how big a dinosaur’s muscles were by providing a surface boundary (the bones provide the internal boundary), how fast they could run, whether they could swim, what their habitat was like, and, of course, more detail about what they looked like, Davis said.

“Crests, spikes, waddles, cheeks, webbed hands, and so forth mostly preserve only as skin,” he said.

Once considered exceedingly rare, dinosaur skin samples have become more and more common with the development of more refined, less destructive excavation methods, Davis said. “Now people take the whole chuck of rock with them and 3D scan [the fossil inside] it,” he said. “With these new techniques, we’re finding it a lot more.”

At this point, he added, finding hadrosaur skin “wouldn’t be news to anyone.”

Davis said future work is needed to determine the specific characteristics of hadrosaur skin that made it tough.

Nearly all specimens of dinosaur skin are fossilized impressions of it; the original soft tissue decayed long ago. Some specimens are mere scraps, Davis said, while others are “enough skin to wrap around a car.”

The paper is titled “Census of Dinosaur Skin Reveals Lithology May Not Be The Most Important Factor in Increased Preservation of Hadrosaurid Skin.”