The War on Poverty lost the political battle

In a new analysis of spending during the Johnson administration, U-M economists Martha Bailey and Nicolas Duquette examine why Johnson and the War on Poverty received so little credit.

“We find that the Johnson administration chose poverty over politics,” said Martha Bailey, associate professor of economics and co-author of a paper titled “How Johnson Fought the War on Poverty: The Economics and Politics of Funding at the Office of Economic Opportunity.” 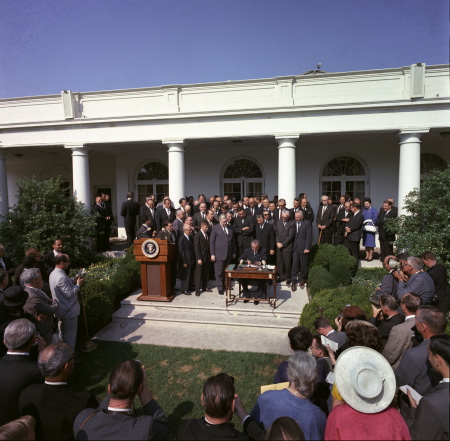 Choosing to fight poverty and discrimination rather than playing politics may help explain some of the immediate backlash against the War on Poverty programs and why it is remembered as a failure, she said.

For their analysis, Bailey and Duquette analyzed the relationship between Economic Opportunity Act funding and local measures of poverty, racial composition, political influence (whether the area was a swing district, had congressional representatives on powerful committees, etc.), as well as rioting, the escalation of Vietnam war and the size of local government.

Together, measures of poverty and racial composition explain more of the variation in funding than do the other more than 20 measures combined. The political variables combined explain less than 2 percent of funding decisions.

Greater spending of EOA money in areas with higher poverty rates suggests the Johnson administration targeted funds in accordance with the War on Poverty platform. While politically expedient decisions would have targeted politics (as Franklin Roosevelt did during the New Deal) or areas with more citizens just below the poverty line, the authors argue that Johnson’s approach sought to engender opportunities in the most disadvantaged areas.

“The evidence is that the Johnson administration used EOA funding to fight poverty, more than to curry political favor,” said Bailey, who also is co-editor of “Legacies of the War on Poverty,” a new book that offers a balanced assessment on the War on Poverty.

Rather than including state and local politicians and powerful community constituencies in the allocation process as Roosevelt did in the New Deal, the Johnson administration used EOA funds to circumvent and confront these power structures.

“EOA funds flowed to poor and nonwhite areas, which empowered the poor and African-Americans and angered entrenched interests,” Bailey said. “Attention to politics is perhaps the greatest difference between the War on Poverty’s spending and that of the New Deal.”

The National Institutes of Health, the National Bureau of Economic Research and the Economic History Association supported the analysis, with additional support from the U-M Rackham Graduate School and the Population Studies Center at the U-M Institute for Social Research.

The paper was recently published by the National Bureau of Economic Research.