The Times they are acclaimin’

Miss Ferenczi, a substitute teacher, begins a stint by ditching a boring lesson on traditional Egyptian irrigation methods and winging it.

Her amazed class of fourth graders is left to sift through the torrent of information she spews and figure out what might be true.

So it goes in “Gryphon,” the title story in English professor Charles Baxter’s latest book, a collection of stories the New York Times named to its “100 Notable Books of 2011” list in November. “Gryphon: New and Selected Stories” is published by Pantheon Books.

Baxter has published five novels, five collections of short stories, three of poems, and two of essays. His novel “The Feast of Love” was made into a 2007 movie with Morgan Freeman, and “Gryphon” became a TV movie starring Amanda Plummer.

Unspoiled by success, Baxter, a Minneapolis native, is a soft-spoken teacher whose greatest joy now is seeing his students do well. We sat down with him in his Lind Hall office to get his take on writing, life, and how to put one into the other. 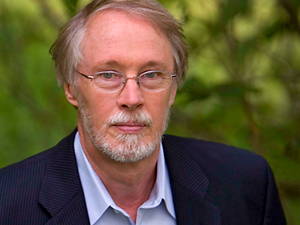 Q: What does it take to be a writer? Can one learn to conceive ideas?
A: You can learn everything about it but the inspiration. I can teach you how to set up scenes, the basis of plot, narrative urgency, and so on, but I can’t tell you what to write about.

I think stories begin when things start to go wrong. They’re about conflict and the difficulties people have. People will ask, “Why can’t we write about good things?” And I say, “Do you know any stories like that?” Genesis is not about the Garden of Eden; it’s about being thrown out of the Garden of Eden.

Q: How do you feel about the standard linear, narrative form of the novel?
A: I don’t think the standard narrative is true to the way we feel our experiences. Our lives don’t feel like a straight line. Mine doesn’t; it feels to me as though experiences come in clusters, and I want my fiction to reflect that. I also want to give my students lots of the options available to them.

Q: In your novel “Saul and Patsy,” you treat the subject of people watching other people and wanting to be as happy as they are. Can you expand on that?
A: Saul [a young husband and father] keeps thinking all the people around him are so happy, but of course he’s like them. My own feeling is that we’re almost taught to envy people who have a lot of money and are successful. Why should we always want to be like those people? Great fictional characters are often great noble failures, like Don Quixote.

Q: Do you start your stories with plot or character?
A: I start with character and a general idea of where the narrative will go. I don’t outline; it takes the fun out of it. I just want to discover what the characters do as I write the book. Writing is an art of discovery. Who is she? I want to know more about this person.

Q: What are you working on now?
A: A group of stories based on certain virtues. So far, I’ve finished loyalty, bravery, and chastity. When I’m finished, I’ll do a series on vices.

Q: Where did the idea for “Gryphon” come from?
A: I was Miss Ferenczi once, when I taught in the Michigan public schools. We were supposed to be doing Egyptian geography and methods of irrigation and I didn’t want to read the textbook, so I made all sorts of stuff up.