The Rio Grande Rift, a thinning and stretching of Earth’s surface that extends from Colorado’s central Rocky Mountains to Mexico, is not dead but geologically alive and active, according to a new study involving scientists from the University of Colorado Boulder’s Cooperative Institute for Research in Environmental Sciences.

“We don’t expect to see a lot of earthquakes, or big ones, but we will have some earthquakes,” said CU-Boulder geological sciences Professor Anne Sheehan, also a fellow at CIRES. The study also involved collaborators from the University of New Mexico, New Mexico Tech, Utah State University and the Boulder-headquartered UNAVCO. The Rio Grande Rift follows the path of the Rio Grande River from central Colorado roughly to El Paso before turning southeast toward the Gulf of Mexico. 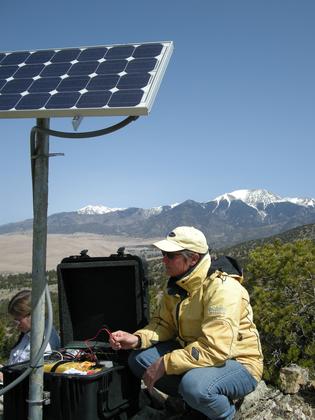 Sheehan was not too surprised when a 5.3 magnitude earthquake struck about 9 miles west of Trinidad, Colo., in the vicinity of the Rio Grande Rift on Aug. 23, 2011.  The quake was the largest in Colorado since 1967 and was felt from Fort Collins to Garden City, Kan.

Along the rift, spreading motion in the crust has led to the rise of magma — the molten rock material under Earth’s crust — to the surface, creating long, fault-bounded basins that are susceptible to earthquakes, said Sheehan, a study co-author and also associate director of the CIRES Solid Earth Sciences Division. The team studied the Rio Grande Rift region to assess the potential earthquake hazards.

Using Global Positioning System instruments at 25 sites in Colorado and New Mexico, the team tracked the rift’s miniscule movements from 2006 to 2011. “Questions we wanted to answer are whether the Rio Grande Rift is alive or dead, how is it deforming and whether it is opening or not,” said Sheehan.

The high-precision instrumentation has provided unprecedented data about the volcanic activity in the region. Previously, geologists had estimated the rift had spread apart by up to 0.2 inches or 5 millimeters each year, although the errors introduced by the scientific instruments were known to be significant. “The GPS used in this study has reduced the uncertainty dramatically,” Sheehan said.

Using the latest high-tech instrumentation, the scientists found an average strain rate of 1.2 “nanostrain” each year across the experimental area, the equivalent of about one-twentieth of an inch, or 1.2 millimeters, over a length of about 600 miles.  “The rate is lower than we thought but it does exist,” Sheehan said.

The researchers also found the extensional deformation, or stretching, is not concentrated in a narrow zone centered on the Rio Grande Rift but is distributed broadly from the western edge of the Colorado Plateau well into the western Great Plains. “The surprising thing to come out of the study was that the strain was so spread out,” Sheehan said.

Results of the study are published in the January edition of the journal Geology.

The team plans to continue monitoring the Rio Grande Rift, probing whether the activity remains constant over time, said lead study author Henry Berglund of UNAVCO, who was a graduate student at CU-Boulder working at CIRES when he completed this portion of the research. Also, the team may attempt to determine vertical as well as horizontal activity in the region to tell whether the Rocky Mountains are still uplifting or not, Berglund said.

As far as the potential for future earthquakes in the region, the study’s results are unequivocal, however. “The rift is still active,” Sheehan said.

The National Science Foundation provided the funding for this study and the NSF-funded EarthScope program and UNAVCO provided instruments, equipment and engineering services. The Boulder-headquartered UNAVCO is a nonprofit, university-governed consortium that facilitates geosciences research and education.