The science of living better, longer

Did you ever wonder what science is doing to help us age more comfortably, in better health, doing the things we care about, for a longer span of time?

If so, have a look at the Yale YouTube channel, where the archived video of last week’s symposium exploring research on aging can be viewed. “Aging Research at Yale: Past Present and Future” brought together the director of the National Institute on Aging (NIA), the ranking Democrat on the House subcommittee that oversees the NIH budget, and a panel of Yale researchers whose work examines aging from the molecular level to that of populations.

U.S. Rep. Rosa DeLauro, D-New Haven, said that aging research needs the full support of Congress in order to save lives. “It’s about pushing the frontiers of knowledge and it’s about improving the quality of life for older Americans,” she said.

NIA Director Richard Hodes, M.D., described the work of the institute and its initiatives in basic and translational science, epidemiology, public health and prevention, and, increasingly, the tools of systems biology. Alzheimer’s disease researchers are mining enormous data sets for new approaches to combat the disorder, which still has no significant therapy to change the course of the disease. Hodes said the field is looking more and more at the earliest stages of neurodegeneration, which are usually asymptomatic, rather than focusing research on patients with more advanced Alzheimer’s. 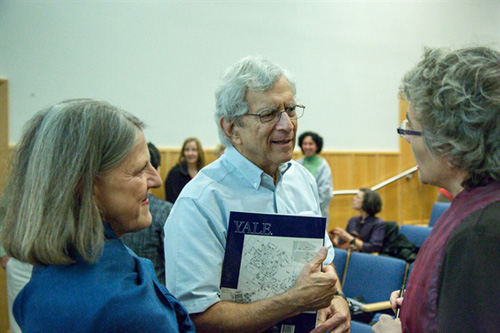 Among the highlights from the symposium:

Mary Tinetti, M.D., the Gladys Phillips Crofoot Professor of Medicine and Epidemiology and Public Health, talked about the “therapeutic competition” that can occur in older adults with multiple chronic diseases—when a medication for one condition worsens another. She and her colleagues are interested, for example, in the potential of blood pressure medications and other drugs to increase the risk of falling. In addition to managing the risks of multiple medications, she said, clinicians need to talk with patients about the outcomes that are most important to them.

“Patients can articulate priorities in the face of tradeoffs,” she said, “and they do vary in what matters most to them.”

Sandy Chang, Ph.D., M.D., associate professor of laboratory medicine and pathology, conducts research into the role of telomeres in the aging process. Telomeres—which Nobelist Elizabeth Blackburn, Ph.D., began to characterize when she was a postdoc in Joseph G. Gall, Ph.D.’s lab at Yale in the 1970s—are the DNA sequences that cap the ends of our chromosomes, and which shrink over time as our cells divide.

He spoke about the relationship between aging and cancer. Cancer cells have high levels of telomerase, an enzyme that preserves telomeres, and this contributes to the ability of cancer cells to grow quickly and out of control.

Steven Strittmatter, M.D., Ph.D., the Vincent Coates Professor of Neurology and Professor of Neurobiology, described research into the molecular mechanisms underlying Alzheimer’s disease, which afflicts some 5.2 million Americans, a number that is expected to triple by 2050.

Strittmatter’s lab has been exploring three potential drug targets—molecules at various stages in a pathway that results in the accumulation of tangled fibers in brain tissue and loss of nerve synapses.

“We have very few weapons we can use in the treatment of Alzheimer’s,” he said, adding that existing drugs can provide a small degree of symptom relief but do not change the course of the disease. “We need to know a lot more about the molecular mechanisms so we can get to a disease-modifying therapy. [We need to] stop this tsunami of Alzheimer’s disease, which threatens to overwhelm our health care system and, on a personal level, is devastating to those whose intellect is robbed.”

Nicholas Christakis, M.D., Ph.D., M.P.H., the Sol Goldman Family Professor of Social and Natural Science and co-director of the Yale Institute for Network Science, spoke about the evolutionary biology that underlies human friendships and lifelong social interactions. In studies conducted with the Hadza people in north-central Tanzania, one of the last remaining hunter-gatherer populations on the planet, Christakis’ team wanted to know if there are similarities in the way their social networks are structured, compared with our own. “They live like we did 10,000 years ago, they have no material possessions to speak of, they sleep under the stars, they don’t have agriculture,” Christakis said.

To explore the question, the researchers studied more than a dozen Hadza camps and took a census of the inhabitants, which was fashioned into a photographic “facebook”—paper sheets of photos and names. The Hadza were asked to identify their friends in a variety of ways that teased out social relationships.

“To make a long story short, Hadza social networks look just like ours, visually and mathematically,” Christakis said. “Despite the fact that in the intervening 10,000 years we invented agriculture, and cities, and telecommunications, we make the same networks they do. So network structure has an ancient origin and it doesn’t seem to have changed.”

This knowledge may be useful in influencing the health of populations, he added. “The pattern of connections among human beings affects the properties of social groups. And new properties, maybe even cooperation, or infection resistance, or intelligence, may emerge because of the connections, because of the ties between people, and not necessarily because of the people themselves.”