If two birds meet deep in the forest, does anybody hear? Until now, nobody did, unless an intrepid biologist was hiding underneath a bush and watching their behavior, or the birds happened to meet near a research monitoring station. But an electronic tag designed at the University of Washington can for the first time see when birds meet in the wild.

A new study led by a biologist at Scotland’s University of St. Andrews used the UW tags to see whether crows might learn to use tools from one another. The findings, published last week in Current Biology, supported the theory by showing an unexpected amount of social mobility, with the crows often spending time near birds outside their immediate family.

The study looked at crows in New Caledonia, an archipelago of islands in the South Pacific. The crows are famous for using different tools to extract prey from deadwood and vegetation. Biologists wondered whether the birds might learn by watching each other.

The results, as reported by St. Andrews, revealed “a surprising number of contacts” between non-related crows. During one week, the technology recorded more than 28,000 interactions among 34 crows. While core family units of New Caledonian crows contain only three members, the study found all the birds were connected to the larger social network. 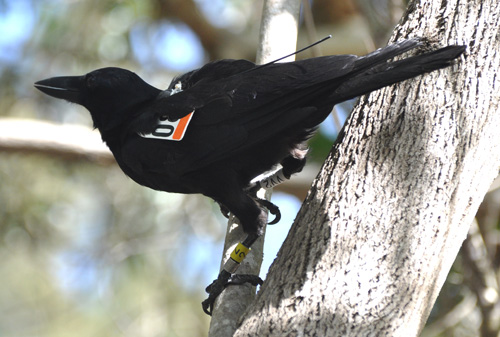 “This is a new type of animal-tracking technology,” said co-author Brian Otis, a UW associate professor of electrical engineering whose lab developed the tags. “Ecology is just one of the many fields that will be transformed with miniaturized, low-power wireless sensors.”

Biologists normally tag animals with radio transmitters that broadcast at a particular frequency, and field researchers use a receiver to listen for that frequency and detect when the animal is present. An encounter between small animals would only be recorded if the researcher was nearby.

“Encounternet tags can monitor each other, so you can use them to study interactions among animals,” said co-author John Burt, a UW affiliate professor of electrical engineering. “You can’t even start to do that with other radio-tracking technology.” 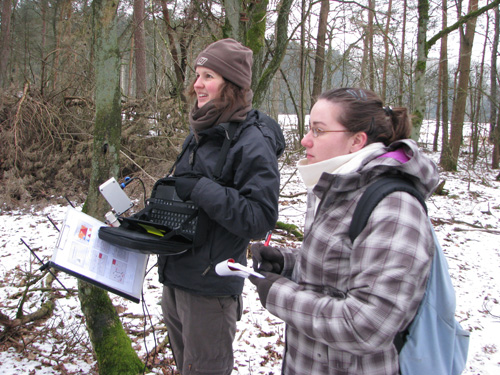 Other research groups are using the UW tags around the world. Researchers at the University of Windsor in Canada are using them to study mating behavior in Costa Rican long-tailed manikins; a researcher at Drexel University is using them to study the interaction between birds and army ants in Costa Rica; German researchers are putting the tags on sea lions in the Galapagos Islands to study their behavior as they pull up on beaches; and researchers in the Netherlands are studying the social behavior of great tits, a small woodland bird.

“It’s a big topic right now, the idea that animals have social networks,” Burt said. He has been working with field biologists for the last three years to deploy the tags.

“There are other tags that can do proximity logging, but they’re all very big and for larger animals. None is as small as Encounternet – or even near to it.”

The smallest of the UW tags weighs less than 1 gram (0.035 ounces) and can be used on animals as light as 20 grams (less than an ounce), about the weight of a sparrow. Researchers attach the tags to birds with straps that degrade and harmlessly fall off after the battery dies. The tag records nearby pulses, and the signal strength gives an estimate of the other animal’s distance.

A typical study using the system includes a few dozen tags and between 10 and 100 fixed base stations. When tagged animals pass a base station the data is transmitted wirelessly from the tag to the base station, and from there to the Internet. Researchers can also reprogram the tags remotely – for example, they can look at initial results to see when there are few encounters happening, and turn the battery off during those times to conserve power.

Burt completed his doctorate at the UW in 2000, with a dissertation on birdsong communication and learning. He wished that there was a way to automatically monitor bird interactions in the wild, and in 2005 joined forces with Otis, an expert in small, lightweight, low-power electronics. Burt managed the project to develop the tags, with funding from the National Science Foundation, as a research scientist in Otis’ group. 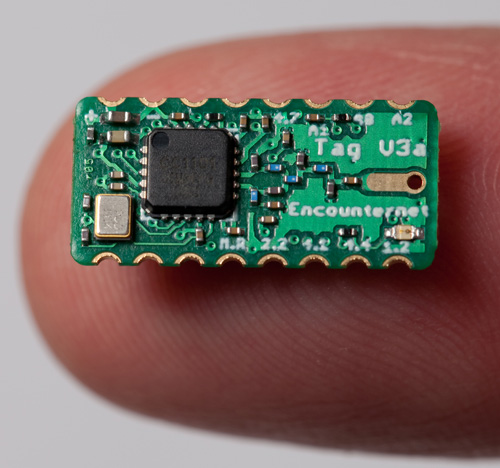 This fall they founded Encounternet LLC in Portland, Ore., where Burt now lives. He is working to add a GPS component to record the location of encounters, and to add an accelerometer and other sensors that could detect an animal’s behavior.

“People are excited about this because for the first time, it allows them to study smaller animal interactions and social networks on an incredibly fine scale,” Burt said. “Social networks are turning out to be key to understanding many animal behaviors. People say Encounternet is the only thing they can find that can collect that information.”