The Old Primates’ Club: Even Male Monkeys Ride Their Fathers’ Coattails to Success

If you’re a male born to a father who’s a strong and enduring community leader, you’re far more likely than your less fortunate peers to become a leader yourself, due to the wide range of social advantages accruing from your dad’s position.

And even if your old man isn’t a leader, other men in your community are more likely to take you under their wing than your sisters, lavishing attention on you and showing you the ropes.

Sound like the basic description of an old boys’ network?

Maybe so, but this is also the social structure that prevails among white-faced capuchin monkeys, those cute little New World primates associated in popular culture with organ grinders, says UCLA primatologist Susan Perry. Her new research provides a glimpse into how our male ancestors may have jockeyed for power and passed it on to their male offspring.

“Offspring, especially male offspring, raised in a group in which their father is the alpha male, throughout their juvenile phase enjoy a host of advantages over less fortunate monkeys,” said Perry, a UCLA anthropology professor who has studied capuchins for 22 years. “A stable, peaceful family environment may have been important to the well-being and future success of children among our remote ancestors, just as it is to children today.”

Perry reports her findings in a study published in the current issue of the peer-reviewed scholarly journal Advances in the Study of Behavior. 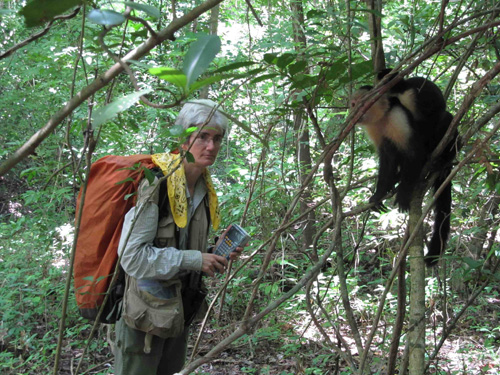 Widely known in popular media for their cleverness, dexterity and trainability, capuchins enjoy a distinction that makes them especially compelling to scholars of the evolution of behavior. The cat-sized primates have the largest brain-to-body ratio among non-human primates, making their behavior particularly relevant for understanding the evolutionary history of their big-brained relatives — the humans.

“There are a lot of reasons to suspect that the same selective forces that shaped humans also shaped capuchins, causing both species to share features such as complex political behavior and culturally transmitted social rituals,” Perry said.

Since 1990, Perry; her husband, Joseph Manson (also a UCLA anthropologist); a University of Iowa faculty member; and 122 students, volunteers and copiously trained locals have spent approximately 79,000 hours observing 444 capuchins that make up 11 social groups in Costa Rica’s Lomas Barbudal Biological Reserve. With data on five generations of these animals, which can live into their 50s, Perry’s Lomas Barbudal Monkey Project is the world’s most detailed study of any natural primate population. In fact, no other study has so thoroughly documented the details of the lives of so many members of a single species of long-lived mammals.

Perry’s latest findings explore the social dynamics of capuchins, who form cooperative groups with an alpha male, several subordinate males and many females. The average size of these groups in the Lomas reserve is 19 monkeys, Perry has found. The alpha males rise to their position — and defend it — by fighting off other males with the help of allies.

Initially, females mate exclusively with the alpha male, Perry said. Extraordinarily, subordinate males wait to mate until the alpha male’s daughters reach sexual maturity, a process that takes an average of six years. The regimes of most alpha males last about a year, but regimes at Lomas have lasted for as long as 18 years and for as little as a fraction of a day.

Following a changing of the guard, the new alpha male immediately kills all infants that have not been weaned, Perry has documented. “It’s chaos,” she said.

In fact, infanticide in this manner is the leading cause of death for infant capuchins. Without nursing infants to care for, the females in the overthrown group quickly return to a fertile state and eventually come around to mate with the new alpha male.

“A marauding male doesn’t know how long he’s going to be in the alpha position, so he really needs to hurry up and start producing babies if he is going to have any hope of protecting them long enough to see them into adulthood,” she said.

As destructive as a changing of the guard is for young capuchins, a stable home life is equally as beneficial, Perry reports. Results from Lomas indicate that 63 percent of males who grow up in groups that are demographically stable because of a long-enduring alpha male become alpha males when they leave the proverbial nest, Perry reports. By contrast, only 11 percent of males from groups that experienced an alpha male turnover in the first five years of their lives go on to become alpha males.

“Since alpha males are responsible for siring the majority of offspring, gaining the leadership spot is very important for reproductive success,” Perry said. “Most likely, none of their genes will be passed to the next generation if they do not become an alpha male.”

The advantages that capuchins get from being reared in stable groups may help account for their success later in life, Perry said.

“If an alpha male manages to endure as the head of a group, more infants will survive,” she said. “That means there will be more play partners for all of the kids who grow up in the group. They will have better opportunities to develop their social skills.”

Honing social skills is important for capuchins because, as with humans, long-term alpha males remain in power not so much because of their fighting ability but because of their ability to socially manipulate others and manage their allies, she said.

The better outcomes for capuchins from stable groups may also have something to do with being spared the stress of a takeover during the early phase of their development, when a lot of brain and body systems are being developed, she said.

“These males have a better chance of surviving to migration age and they have more choices of those to migrate with, so they’re much better prepared for adult life,” she said.

Their advantages allow them to sire more progeny, which over time has a tremendous impact.

“Males from stable backgrounds stand a better chance of becoming among the few males that are extraordinarily successful in reproducing,” Perry said.

Males reared in groups under the leadership of enduring alpha males are not the only beneficiaries of the old boys’ network, Perry has found. In a study of male and female infants in the first year of life at Lomas, all male infants enjoyed considerable advantages over their sisters, she reports. Adult males showed a three-fold preference for grooming male infants — a key marker of affiliation — over female infants.

In developing relationships with the male infants and young males, subordinate males take as active a role as the alpha males, Perry has found.

“Subordinate males are very rarely the fathers of the young males, but they play with them a lot,” she said. “They’re really good baby-sitters.”

But more than child’s play is at work in these exchanges, she said. “The adult males are establishing relationships with young males who can later become useful allies in attempts to acquire and defend breeding positions.”