Got Milk? Climate Change Means Stressed Cows in Southern U.S. May Have Less

“Cows are happy in parts of Northern California and not in Florida” is a good way to sum up the findings of new research from the University of Washington, said Yoram Bauman, best known as the “stand-up economist.”

Bauman and colleagues found that the decline in milk production due to climate change will vary across the U.S., since there are significant differences in humidity and how much the temperature swings between night and day across the country. For instance, the humidity and hot nights make the Southeast the most unfriendly place in the country for dairy cows.

Their study combined high-resolution climate data and county-level dairy industry data with a method for figuring out how weather affects milk production. The result is a more detailed report than previous studies and includes a county-by-county assessment — that will be available to farmers — of the impact climate change will have on Holstein milk production in the U.S. through 2080.

Bauman, who contributed to the research while teaching for the UW’s Program on the Environment and is now a fellow at the Sightline Institute, will present the findings during this week’s Conference on Climate Change, held on the UW campus. 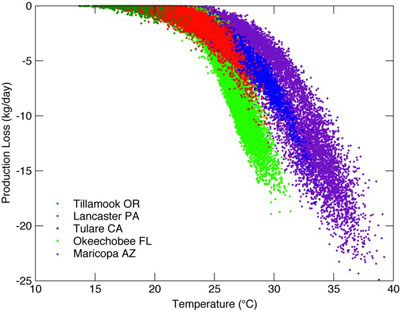 The temperature at which cows start producing less milk varies across the country depending on other factors like humidity and overnight temperature swings. Image credit: UW

Scientists and the dairy industry have long known about and studied the impact of heat stress on cows’ milk production.

“Using U.S. Department of Agriculture statistics, if you look at milk production in the Southeast versus the Northwest, it’s very different,” said Guillaume Mauger, a postdoctoral researcher in the UW’s Climate Impacts Group and co-author of the paper. “It’s reasonable to assume that some of that is due to the inhospitable environment for cows in the Southeast.”

Previous research into how climate affects cow milk production in the U.S. was either limited in geographic scope or was too simplistic, ignoring the impact of humidity, for instance.

But by using detailed climate data covering night and day across the entire country, the researchers made some interesting discoveries. For instance, in Tillamook, Ore., where the climate is humid and the nighttime temperature doesn’t change much, milk production begins to drop at a much lower temperature than in the dry Arizona climate. Tillamook cows become less productive starting at around 15 C, or 59 F, while those in Maricopa, Ariz., start making less milk at around 25 C, or 77 F. In humid Okeechobee, Fla., cows become less productive at about the same temperature but losses increase at a much faster rate than in Arizona.

Fortunately for cows in Tillamook, however, the temperature there doesn’t stray upward often and so actual milk losses are negligible, the researchers said. In Maricopa, the mean daily losses in summer, when the temperature soars, reach nearly 50 percent. 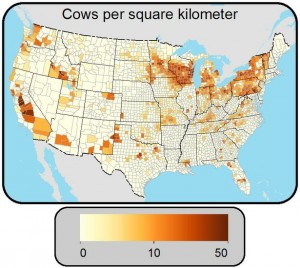 The study found that dairy farmers are already clustering in the most comfortable areas for cows. Image credit: UW

The authors also found that dairy farmers are already clustering in the most comfortable areas for cows, such as the cool coastal counties of Washington state.

But the outlook isn’t good for areas across the southern U.S. where cows are already less productive in the heat of the summer.

“Perhaps most significantly, those regions that are currently experiencing the greatest losses are also the most susceptible: they are projected to be impacted the most by climate change,” the researchers wrote in the paper.

Still, there’s a notable silver lining in the report. While the researchers project that dairy production averaged across the U.S. will be about 6 percent lower in the 2080s than at the start of the century, other factors are likely to actually boost milk production even more.

“Management practices and breeding are on track to double milk production in Holsteins in the next 30 or 50 years,” Mauger said. “So while a 6 percent drop is not negligible, it’s small compared to other positive influences.”

The research could be valuable to farmers looking to evaluate the cost and effectiveness of methods for keeping cows cool. “You can pick up dairy cows and truck them elsewhere,” said Bauman, who noted that ranchers looking to expand could make decisions based on climate.

The researchers plan to make the data freely available so that farmers can look up their counties and find how the climate may affect their cows.

Other co-authors are Eric Salathé, an assistant professor at UW Bothell and member of the UW’s Climate Impacts Group, and Tamilee Nennich of Purdue University.

The researchers hope next to look at the impact climate has on other barnyard animals, such as pigs, and other effects, such as mortality rate, that rising temperature might have on cows.

The Conference on Climate Change is put on by publisher Common Ground and will take place in the UW’s William H. Gates School of Law building on Thursday and Friday.