A team of UA researchers can already “farm” on the red planet with a fully functional prototype greenhouse that produces sweet potatoes and strawberries.

“So, I’ve got to figure out a way to grow three years’ worth of food here — on a planet where nothing grows,” says Mark Watney, the botanist who ends up stranded on the red planet in Ridley Scott’s new film, “The Martian.”

Watney, whose character is played by actor Matt Damon, later engineers a way to grow potatoes on Mars and remarks, “I am the greatest botanist on this planet.”

Despite never saying it explicitly in the novel on which the film is based, author Andy Weir has revealed that “The Martian” is set in the near future; the NASA crew lands on Mars in November 2035. 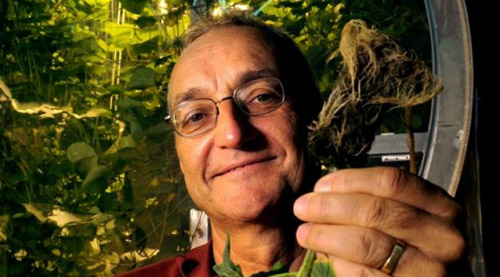 But UA scientists already have figured out how to grow food on the freeze-dried planet, including sweet potatoes and strawberries — roughly 20 years ahead of Mars’ “greatest botanist.”

The Controlled Environment Agriculture Center, or CEAC, is part of UA’s College of Agriculture and Life Sciences. It is located about three miles from campus, near Campbell Avenue and Roger Road, where a team of researchers has spent the last seven years building and maintaining a fully functional prototype lunar and Martian greenhouse. The project, a NASA Steckler Space Grant collaboration, brings together some 20 researchers from different disciplines to grow crops that could grow on Mars and the moon, all inside of one big aluminum-framed, plastic-covered cylinder.

How It Works: Hydroponics

While Watney is forced to engineer his system by recycling his own vacuum-sealed fecal matter and chemically synthesizing water, the lunar and Martian greenhouse at the UA relies on a complex hydroponics system to provide fresh water that, when combined with nutrients, supports the plants.

Hydroponics, or the recirculation of plant fertilizer and water to grow plants in the absence of soil, is the driving force behind the greenhouse. The hydroponics system and controlled-environment greenhouse provide yields 10 times of those in an open field, so the notion of feeding a crew of astronauts for hundreds of sols — Martian days, spanning 24 hours and 39 minutes — isn’t just sci-fi.

This kind of ingenuity already is being applied to earthbound issues, such as enhancing global food security.

As a controlled environment, the greenhouse is computer automated to provide the optimum air temperature, humidity, water, light and nutrients.

“We have a wide array of sensors that monitor all of the environmental conditions in there,” said Hernandez, a UA senior in plant sciences. “We have a controller that we can program and make changes to the day-to-day routine that the plants experience, and just being able to collect all of that data and really understand the behavior of the system through that data is very interesting for me.”

And because all materials are known and controlled, consumers of the food don’t have to worry about unexpected disease or food-borne illness pathogens — which is good news for earthlings and Martians.

Reaction to ‘The Martian’

“It was particularly interesting when they began discussing what we do for our research,” he said.

Giacomelli said that when he first began reading the book, he couldn’t help but feel that Watney “really should have been a horticulturalist. I mean, think about it. Did Weir really think NASA needed a botanist as a crew member because they were to find plants on Mars?”

He was quick to point out some of Watney’s fallacies, too, because growing Martian food “is our day job. It’s what we do here every day.”

In response to Watney saying his potatoes soon will be “ripe,” Giacomelli said, “The potatoes swell in size but don’t ripen like a fruit or many vegetables.”

There is another passage in which Watney says he can urinate directly onto the plants.

“The plants will take their share of water and the rest will condense on the walls,” Watney says.

Said Giacomelli: “Major mistake! Water the plants with unprocessed urine, and the high salt content will kill them. Plus, the plants need nitrate-nitrogen, which is two biological steps away from urea-nitrogen that dominates the urine.”

He quipped, “Actually, it was the capability of Watney’s duct tape that kept the potential reality alive for me. I know duct tape can do all.”

After getting past a few liberties the story takes in growing plants, Giacomelli said he “was finally converted to the possibilities of ‘The Martian.’ I did really enjoy the book.” He said he was impressed by the science and engineering presented in the story.

“This (lunar and Martian) greenhouse is being supported by NASA so that someday people will live and work on another planet. When they do, they need food,” Giacomelli said, adding that it was “phenomenal to hear the challenges that Mr. Watney had growing his crops. We had the exact same challenges.”