With a $3.9 million grant from the U.S. Department of Energy, a UA-led international collaboration studies how microbes release greenhouse gases as they gain access to nutrients in the soil thawing under the influence of warmer global temperatures.

The U.S. Department of Energy has awarded $3.9 million to an international collaboration led by University of Arizona ecologists Scott Saleska and Virginia Rich to study how microbes release greenhouse gases as they access nutrients in thawing permafrost soils under the influence of a warmer climate.

The project aims to explain how microbe-driven processes influence climate change, and in what ways climate-driven changes, such as changes in soil chemistry and changes in plant communities, feed back on those microbial processes. The team hopes the results will help solve what Saleska, a professor in the UA Department of Ecology and Evolutionary Biology, calls the “big biology problem” in climate change. 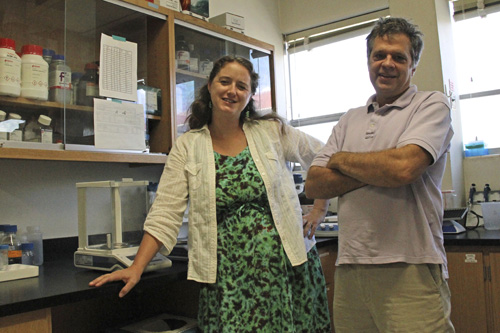 Lead an international collaboration to study the influence of soil microbes on global climate: Virginia Rich in the UA department of soil, water and environmental science and the UA Institute of the Environment (left) and Scott Saleska of the department of ecology and evolutionary biology. (Photo by: Beatriz Verdugo/UANews)

One third of the world’s carbon is locked away in permafrost soils around the world – areas where the ground stays frozen year-round. In many areas, though, warmer temperatures have started to change things; soils that used to be frozen year-round have begun to thaw during certain times of the year while others experience longer seasonal thawing or thaw down to deeper depths than they used to.

“As the system warms, we see the seasonal thaw go deeper and deeper, and eventually, everything thaws at some point over the year and the permafrost is going away,” Saleska explained. “This is already happening and if we don’t take steps to avoid climate change, we expect this type of ecosystem to be gone within the next 100 to 200 years.”

This peat permafrost region is a sentinel ecosystem of global change, according to Rich, who is a faculty member in the UA Department of Soil, Water and Environmental Science and, together with Saleska, an affiliate of the UA Institute of the Environment.

“This habitat literally is at the leading edge of climate change, because we can observe how it is being pushed northwards,” Rich said. “We can see changes with our own eyes and within a matter of years. Because they happen so quickly there, our science has immediate payoff and very real implications that apply on a global scale.” 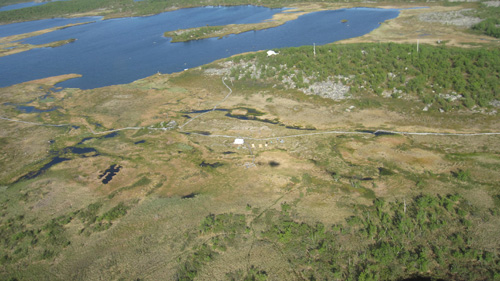 As the soils thaw, massive stockpiles of organic material become available to microbes, which metabolize the nutrients and release carbon dioxide and methane. Both are greenhouse gases, with methane being 25 times as powerful at trapping heat in the atmosphere as carbon dioxide, Saleska explained. He likened the carbon in frozen soils to food stockpiled in a freezer.

“For microbes, that carbon is the food, and as the freezer fails, it becomes a microbial feast which ends up releasing a lot of that carbon to the atmosphere,” said Saleska, whose group has been studying interactions between ecosystems and climate in all major climate zones of the Earth – tropical, temperate and polar. “The big question is, how much carbon is released as the freezer fails and how much worse does it make climate change? We’re looking at the complete end-to-end process of carbon release, and specifically, how much is released as carbon dioxide and how much as methane.”

To answer those questions, the team is measuring both soil gas emissions and the microbes that produce those gases at Stordalen Mire in Abisko National Park in Sweden, just north of the Arctic Circle. Not far from the long-established Abisko research field station, the study site offers the combination of a fully outfitted field station with power and Internet access and the right environmental conditions to achieve the scientific goals.

According to Saleska, a key challenge of this work lies in integrating ecosystem-scale measurements with molecular-scale studies of microorganisms, requiring collaborations among different scientific fields such as ecology and atmospheric science with molecular biology.

Focusing on the large-scale side of the problem, Saleska’s team has installed special instruments for measuring fluxes using Plexiglas chambers that periodically set themselves down over the surface and trap the gases emanating from the soil.

“This tells us which kinds of gases come out of the soil and in what quantities, and from their composition we can tell what microbial process produced them,” Saleska said.

Taking advantage of technologies not available only a few years ago, Rich’s team is focusing on the small-scale molecular measurements, analyzing soil samples to understand their microbial diversity.

“We have just begun mapping which microbes are there and how they’re responding to these changes,” said Rich. “By looking at their genes and proteins we can profile their communities and their activities.”

The processes the group has set out to study are extremely complex because soil microbes can adapt to changing ecological conditions and their communities change under the effect of climate change.

“There is more than one way to make methane,” Saleska said. “Depending on the conditions, microbes use different pathways to decompose organic matter. As the permafrost thaws, the ice melts and the soil becomes partially inundated with water, making it more difficult for oxygen to get in.”

As oxygen becomes depleted, soil organisms have to make do with something else to continue consuming organic matter, he explained.

“Think of these metagenomes as several hundreds of different puzzles with their pieces all mixed together. Using clever methods, you can put those puzzles together. This approach can be more powerful than cultivating soil microbes in the lab, because we can only grow about 1 percent of organisms out there, and those may not be the important things out there.”

One of Rich’s team members specializes in metaproteomics, a nascent field that tries to catalog and understand all of the proteins organisms use in making a living.

“With metaproteomes, we can ask questions like, which organisms are the most active in the permafrost soil community and on which metabolic proteins do they rely the most?” Rich explained. “And which microbes produce which types of carbon?”

“With the new genomic and proteomic tools that Virginia and her collaborators on the project are using, we can open the microbial black box and understand what microorganisms do,” Saleska added. “In the end, our goal is to understand how what is happening at the landscape emerges from what microbes do, and to use the combined results to better predict how much carbon will be liberated globally and what effects that will have on climate change.”