The Era of Neutrino Astronomy has Begun

COLLEGE PARK, Md. – Astrophysicists using a telescope embedded in Antarctic ice have succeeded in a quest to detect and record the mysterious phenomena known as cosmic neutrinos – nearly massless particles that stream to Earth at the speed of light from outside our solar system, striking the surface in a burst of energy that can be as powerful as a baseball pitcher’s fastball. Next, they hope to build on the early success of the IceCube Neutrino Observatory to detect the source of these high-energy particles, said Physics Professor Gregory Sullivan, who led the University of Maryland’s 12-person team of contributors to the IceCube Collaboration.

“The era of neutrino astronomy has begun,” Sullivan said as the IceCube Collaboration announced the observation of 28 very high-energy particle events that constitute the first solid evidence for astrophysical neutrinos from cosmic sources.

By studying the neutrinos that IceCube detects, scientists can learn about the nature of astrophysical phenomena occurring millions, or even billions of light years from Earth, Sullivan said. “The sources of neutrinos, and the question of what could accelerate these particles, has been a mystery for more than 100 years. Now we have an instrument that can detect astrophysical neutrinos. It’s working beautifully, and we expect it to run for another 20 years.” 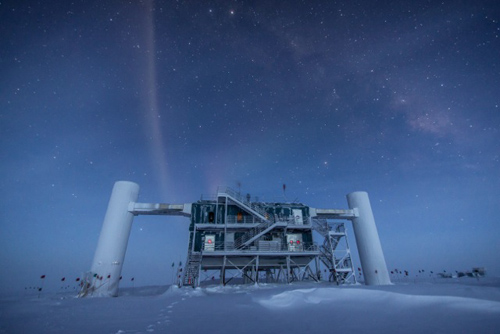 Computers at the IceCube laboratory collect raw data in near-real time from detectors buried deep in the Antarctic ice. Events selected for physics studies are sent north via satellite for use by any member of the IceCube Collaboration. The UMD Maryland IceCube team designed the data collection system. Image credit: Felipe Pedreros, IceCube/NSF

The collaboration’s report on the first cosmic neutrino records from the IceCube Neutrino Observatory, collected from instruments embedded in one cubic kilometer of ice at the South Pole, was published Nov. 22 in the journal Science.

“This is the first indication of very high-energy neutrinos coming from outside our solar system,” said University of Wisconsin-Madison Physics Professor Francis Halzen, principal investigator of IceCube. “It is gratifying to finally see what we have been looking for. This is the dawn of a new age of astronomy.”

“Neutrinos are one of the basic building blocks of our universe,” said UMD Physics Associate Professor Kara Hoffman, an IceCube team member. Billions of them pass through our bodies unnoticed every second.  These extremely high-energy particles maintain their speed and direction unaffected by magnetic fields. The vast majority of neutrinos originate either in the sun or in Earth’s own atmosphere. Far more rare are astrophysical neutrinos, which come from the outer reaches of our galaxy or beyond.

The origin and cause of astrophysical neutrinos are unknown, though gamma ray bursts, active galactic nuclei and black holes are potential sources. Better understanding of these neutrinos is critically important in particle physics, astrophysics and astronomy, and scientists have worked for more than 50 years to design and build a high-energy neutrino detector of this type. 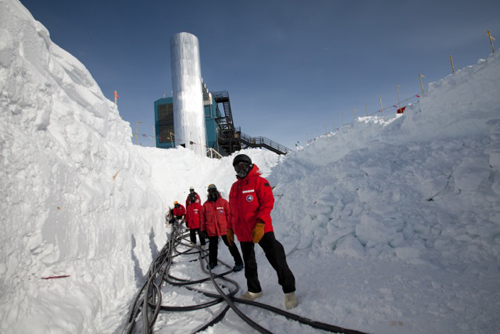 IceCube was designed to accomplish two major scientific goals: measure the flux, or rate, of high-energy neutrinos and try to identify some of their sources. The neutrino observatory was built and is operated by an international collaboration of more than 250 physicists and engineers. UMD physicists have been key collaborators on IceCube since 2002, when its unique design was devised and construction began.

IceCube is made up of 5,160 digital optical modules suspended along 86 strings embedded in ice beneath the South Pole. The National Science Foundation-supported observatory detects neutrinos through the tiny flashes of blue light, called Cherenkov light, produced when neutrinos interact in the ice. Computers at the IceCube laboratory collect near-real-time data from the optical sensors and send information about interesting events north via satellite. The UMD team designed the data collection system and much of IceCube’s analytic software. Construction took nearly a decade, and the completed detector began gathering data in May 2011.

“IceCube is a wonderful and unique astrophysical telescope – it is deployed deep in the Antarctic ice but looks over the entire Universe, detecting neutrinos coming through the Earth from the northern skies, as well as from around the southern skies,” said Vladimir Papitashvili of the National Science Foundation (NSF) Division of Polar Programs.

In April 2012 IceCube detected two high-energy events above 1 petaelectronvolt (PeV), nicknamed Bert and Ernie, the first astrophysical neutrinos definitively recorded by a terrestrial detector. After Bert and Ernie were discovered, the IceCube team searched their records from May 2010 to May 2012 of events that fell slightly below the energy level of their original search. They discovered 26 more high-energy events, all at levels of 30 teraelectronvolts (TeV) or higher, indicative of astrophysical neutrinos. Preliminary results of this analysis were presented May 15 at the IceCube Particle Astrophysics Symposium at UW–Madison. The analysis presented in Science reveals a highly statistically significant signal (more than 4 sigma), providing solid evidence that IceCube has successfully detected high-energy extraterrestrial neutrinos, said UMD’s Sullivan.

Since astrophysical neutrinos move in straight lines unimpeded by outside forces, they can act as pointers to the place in the galaxy where they originated. The 28 events recorded so far are too few to point to any one location, Sullivan said. Over the coming years, the IceCube team will watch, “like waiting for a long exposure photograph,” as more measurements fill in a picture that may reveal the point of origin of these intriguing phenomena.

New detection systems for astrophysical neutrinos are also in the works. Hoffman is leading the development of the Askaryan Radio Array, a neutrino telescope that uses radio frequency, which transmits best through very cold ice, to detect the particles. Plans are underway for 37 subsurface clusters of radio antennae

The IceCube Neutrino Observatory was built under a NSF Major Research Equipment and Facilities Construction grant, with assistance from partner funding agencies around the world. The NSF’s Division of Polar Programs and Physics Division continue to support the project with a Maintenance and Operations grant, along with international support from participating institutes and their funding agencies.