The Emergence of Holographic Video

Researchers at the University of Arizona (UA), Tucson, have developed a holographic system that can transmit a series of 3D images in near-real-time, a precursor to holographic videoconferencing. 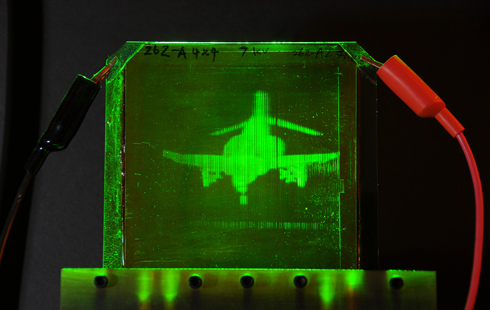 About the image: An image of an F4 Phantom fighter jet created with the new 3D telepresence system. Image Credit: University of Arizona

The system incorporates a novel, photorefractive polymer–one that can rapidly refresh holographic images and is scalable for production–coupled to a unique system for recording and transmitting 3D images of individuals and objects via Ethernet.

Lead author Pierre-Alexandre Blanche and his colleagues from the university and Nitto Denko Technical Corp. of Oceanside, Calif., describe the breakthrough in the cover story of the Nov. 4, 2010, issue of Nature.

“This advance brings us a step closer to the ultimate goal of realistic holographic telepresence with high-resolution, full-color, human-size, 3D images that can be sent at video refresh rates from one part of the world to the other,” says co-author and project lead Nasser Peyghambarian of UA and the Director of NSF’s multi-institution Engineering Research Center for Integrated Access Networks (CIAN). 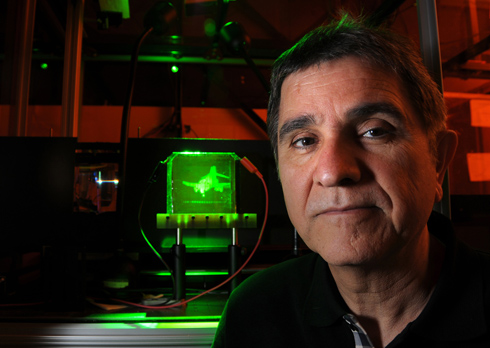 The researchers had previously demonstrated a refreshable polymer display system, but it could refresh images only once every four minutes. The new system can refresh images every two seconds; while not yet ideal for a display, the rate is more than one hundred times faster.

Additionally, using a single-laser system for writing the images onto the photorefractive polymer, the researchers can display visuals in color. While the current refresh rate for multi-color display is even slower than for monochromatic images, the development suggests a true 3D, multicolor system may be feasible.

“This breakthrough opens new opportunities for optics as a means to transport images in real time,” says Lynn Preston, director of the NSF Engineering Research Centers program that supports CIAN. “Such a system can have an important impact on telepresence, telemedicine, engineering design and manufacturing, and other applications. This is an early and tremendously important outcome from this three-year old center.”

About the video: A pulsed 50-Hz Laser inscribes a holographic image of a F-4 fighter jet into the photo-refractive polymer screen. Credit: N. Peyghambarian, University of Arizona

More information is available in the UA press release.

This material is based upon work supported by the Engineering Research Center Program of the National Science Foundation under NSF Cooperative Support Agreement Award No. EEC-0812072