The Death of the Death Penalty?

Texas leads the nation in executions. Minnesota has no death penalty. So two researchers—one from the University of Minnesota and one from the University of Texas at Austin (UT Austin)—teamed up to find out something no one had ever looked at before: what the death penalty does for the murder victims’ families. They compared family survivors’ experiences in Texas with Minnesota, the latter one of 18 states with life without the possibility of parole (LWOP) as its “Ultimate Penal Sanction.”

The study used in-person interviews with victims’ families to examine the death penalty process and its long-term impact on the families. 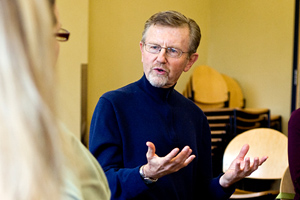 Most studies on the death penalty have focused on societal concerns—cost effectiveness and mistakes in death penalty cases, says co-author Mark Umbreit. This study is the first to look at what the death penalty does for the murder victims’ families. Image credit: University of Minnesota

The study itself does not advocate for the death penalty or for LWOP, but it does reference a key reason often given in support of the death penalty by Americans—that, as a form of retribution, it succeeds in bringing satisfaction and closure to murder victims’ families. In other words, it helps them heal.

The study was led by University of Minnesota alum and former adjunct professor Marilyn Peterson Armour (now with UT Austin, where the research recently won UT’s most prestigious research award) and Mark Umbreit, professor and director of the Center for Restorative Justice and Peacemaking in the School of Social Work at the University of Minnesota. It is the first systematic inquiry dealing directly with whether capital punishment affects the healing of homicide survivors.

Most studies, says Umbreit, have focused on societal concerns regarding the death penalty—including cost effectiveness and mistakes in death penalty cases.

“We’re still kind of teasing out all the implications of this study, but it certainly raises significant policy issues,” says Umbreit. “It challenges this notion, this assumption that, ‘well, at least the death penalty really brings closure to survivors.’”

Among the findings: In Minnesota, victims’ family members show higher levels of physical, psychological, and behavioral health, as well as more satisfaction with the criminal justice system. The findings, says Umbreit, have implications for trial strategy and policy development.

“If a growing [number] of people—and this is clear through surveys in this country—are really questioning the death penalty, realizing that it’s more costly than life without parole (it is), or that there have been people on death row who have been innocent (there have) and the one real pillar is that at least it brings closure to victims … If that’s being challenged, then at a public policy level it really brings up the question, ‘Should we still be doing this?’” says Umbreit.

Interestingly, the study found that the expectation that closure will occur with the death of the murderer is so ingrained in society that, even in Minnesota, survivors wished for the death penalty, believing, incorrectly, that the murderer’s death would be more satisfying than LWOP.

For Umbreit, one of the lessons here is that, at least through the law, closure can never occur.

Through the lens of his research, Umbreit believes that central to criminal justice should be an acknowledgment of what constitutes a healing path for survivors where offenders received the ultimate penal sanction, and whether those elements foster or hinder the healing process.

Indeed, Umbreit has pioneered an end to conflict, healing, and a sense of closure, using nothing more novel or more powerful than conversations—which may seem incomprehensible to many of us—between murderers and victims’ families and loved ones. It’s a concept called “restorative justice.”

“Restorative justice doesn’t view crime as just a violation of law. Yes, it is, but it’s fundamentally a traumatic act; a violation of people—of families and individuals,” Umbreit says. “The human impact is extremely important.” Because of that, he says, the research holds another important lesson:

“It’s the extreme importance of listening to victims. In this case, to family surviving victims of homicides. To listen to their concerns and perceptions—for us, as professionals, not to make assumptions about what they need. To anchor public policy as much as possible in the people most affected by it.”

Still, he cautions, the study needs to be done on a national scale. “This is still what I’d consider an exploratory study—it’s a small sample. But it provides a very rigorous methodology—incredibly deep interviews with these people, where they share their life stories, their narratives. And that qualitative data matched with the quantitative data,” says Umbreit.

So for now, at least in Minnesota, with the experience of LWOP, says Umbreit, “you could say that, if you really are concerned about the healing impact of the ultimate penal sanction on family survivors, there’s a clear indication that the death penalty doesn’t foster that in the long term.”

The full study is available online.