You got it wrong, it’s not about the great scientist Albert Einstein, it’s about Green Party’s 2016 presidential candidate ‘crazy Dr. Jill Stein’, who is now initiating vote recounts in Wisconsin, Pennsylvania and Michigan, with the hope Hillary Clinton will come out as winner and this ‘crazy Dr. Stein’ will be awarded with all the credits!

„Election integrity experts have independently identified Michigan, Pennsylvania and Wisconsin as states where “statistical anomalies” raised concerns. Our effort to recount votes in those states is not intended to help Hillary Clinton.“

Really? But at the bottom of her fund raising page, this image says something completely different: 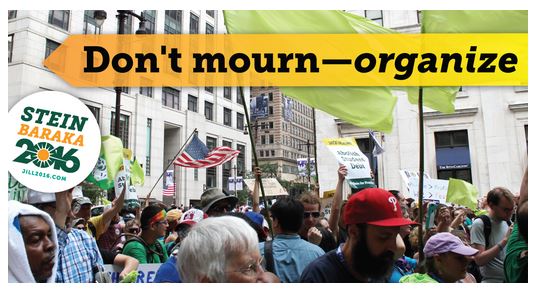 Mourn? – for whom? – definitely for Hillary Clinton.

For what? – because Mrs. Clinton lost the election!

But why this crazy woman is now ‘lumping-and-jumping’ with the vote ‘recount show’?

We know from Wikileaks files how corrupt the Clintons are. Now Clinton’s team need someone with a fair image. Certainly Green Party, which generally represents ‘everything is green’-type hype, is the best option.

So behind the curtains or under the table, what could be her deals with the Clintons?

– First, this will give her publicity, not only in US but also internationally. She can later ‘sell’ her image for further gains.

– Clintons might have already offered her environment minister position if the ‘miracles’ happen?

Inside Hillary’s crooked mind she still can’t accept the election results. And don’t forget the podium was big and colorful in New York to celebrate her presidency and it was not Hillary Clinton but John Podesta who asked the supporters to ‘go home’. We understand the pain.

As President-elect Donald Trump said, this is just a ‘scam’ nothing more. Just a farce!

It would be better if President Trump send this crazy Dr. Stein to Guantanamo for mental treatment – she has to come out of her ‘pubilicity obsession’ and learn to accept the reality. World would be better without these kind of political junkies.