U.S. emergency care costs may be more than twice previously published estimates, according to a new analysis that critiques those estimates, argues for improved accounting, and suggests considering the value of emergency care as well as total spending.

PROVIDENCE, R.I. [Brown University] — Alternately praised in the aftermath of horrible tragedies as a heroic service and lamented in policy debates as an expensive safety net for people without primary care, emergency medicine is often a hot topic. Despite that importance, an analysis published online April 26 in the Annals of Emergency Medicine finds that national expenditures on emergency care are likely significantly higher than previously thought.

“The ER has become increasingly important as a place where people go for acute unscheduled care, however there has been little rigorous analysis of its cost structure,” said paper lead author Dr. Michael Lee, assistant professor of emergency medicine in the Warren Alpert Medical School of Brown University and a physician at Rhode Island Hospital and The Miriam Hospital.

Lee, who had a prior career in economics and finance before training in emergency medicine, co-wrote the analysis with Dr. Brian Zink, professor and chair of the Department of Emergency Medicine at the Alpert Medical School, and Dr. Jeremiah Schuur, assistant professor at Harvard Medical School and director of quality and patient safety for the Department of Emergency Medicine at the Brigham and Women’s Hospital.

The challenge of properly accounting for the costs of emergency care, Lee said, becomes crucial as health care financing moves from a fee-for-service model to bundled payments for patient populations or episodes of care. 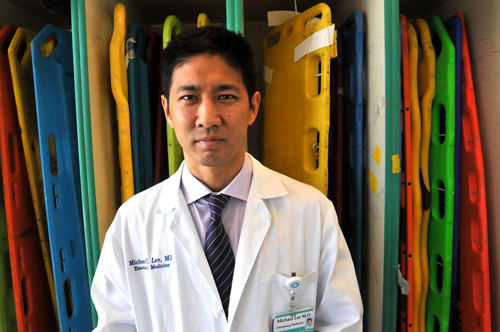 Analysis isn’t just about cost – it must include value. “The (emergency room) has become increasingly important as a place where people go for acute unscheduled care,” says Dr. Michael Lee. “However, there has been little rigorous analysis of its cost structure.” Image credit: Photos by Frank Mullin/Brown University

The analysis first examines current estimates of aggregate spending on emergency department (ED) care. The Agency for Healthcare Research and Quality’s Medical Expenditure Panel Survey (MEPS) estimates $48.3 billion of spending on emergency care in 2010, or 1.9 percent of the nation’s total health care expenditures of $2.6 trillion. With the message that “The total cost is small relative to the entire health care system,” the American College of Emergency Physicians has embraced the AHRQ figure in its “Just 2 percent” public relations campaign.

But Lee and his co-authors point out, based on data from other studies, that MEPS undercounts the number of ED visits and the number of ED patients who are admitted to hospitals. Adjusting for those discrepancies using data from a variety of other published sources, the authors estimate that ED costs are between 4.9 percent to 5.8 percent of total health care spending.

The authors went beyond national data sets, including the National Emergency Department Sample, to review ED spending data from a different source: a major national private insurer. The data included charges from doctors and hospitals for imaging, testing, and other procedures. But again there were accounting differences between admitted and discharged patients and a need to account fully for spending from Medicare and Medicaid. The authors’ estimate based on this data is ED spending that is 6.2 to 10 percent of total health care spending.

Much of the debate in the academic literature around the expense of ED care has to do with whether the bulk of costs are fixed (e.g., expensive equipment and continuous staffing) or marginal (e.g., flexible staff time, expendable supplies). According to Lee, the cost structure of the ED remains poorly understood and is significantly more complex than what is modeled in existing studies.

As with assessments of total costs, the authors report, the studies vary widely even after adjusting for inflation. Across four major studies over the last three decades, the average cost per patient of an ED visit in 2010 dollars ranged from only $134 to more than $1,000, Lee and colleagues found. Meanwhile, the marginal cost of an ED visit (factoring out the fixed costs), ranged from $150 to $638.

The authors instead argue for an accounting based approach to ED costs using a methodology known as “Time-Driven Activity Based Costing (ABC),” which has been applied to health care by Robert Kaplan and Michael Porter, professors at the Harvard Business School.

The method maps all clinical, administrative, and diagnostic steps in a patient encounter and assigns costs to each activity, explicitly accounting for the time spent on each task.

ABC accounting might provide a more realistic and transparent measure of ED costs, Lee said, because the emphasis on time is particularly relevant for emergency medicine.

“The real cost of providing emergency care has to do with accurately measuring the resources that are used, and time is an important variable to take into account,” he said.

The authors envision using the methodology to measure the cost of common ED processes or chief complaints, and to compare this to alternative sites such as primary care offices or clinics, he said. They also point out that ABC accounting gives “gives ED managers specific data they can use to improve the value of care by identifying high-cost steps in the process.”

The authors acknowledge that an outcome of their analysis reporting higher overall costs for emergency care, may invite further criticism that the expense of emergency care represents unnecessary, inefficient care.

“However, we offer a more sanguine interpretation — the high share of spending affirms the importance of emergency medicine within the health care system,” they wrote. “With 130 million visits, 28 percent of all acute care visits, and accounting for nearly half of all admissions, emergency medicine should be expected to represent a large share of health care spending.”

And Lee cautions, based on other studies, that efforts by private and government payers to divert ER care may not lead to large aggregate savings.

“Diverting nonemergency care may simply shift costs onto primary care offices and clinics which may not have the infrastructure to accommodate a large volume of unscheduled care,” Lee said.

Instead there may be more potential for cost savings by focusing on reducing unnecessary diagnostic testing in the ED or unnecessary admissions that originate from the ED.

Lee and his co-authors call for the debate to include value, not just cost.

“More attention should be devoted to quantifying the value of specific aspects of emergency care,” they wrote. “Rather than minimize the issue of cost, we should recognize the economic and strategic importance of the ED within the healthcare system and demonstrate that costs are commensurate with value.

Lee acknowledges that this remains a challenge for the field of emergency medicine. “The core of our business is ruling out critical diagnoses. Many of the things we look for are low probability but highly dangerous conditions. The big question is how do you quantify value when your work is often focused on trying to demonstrate the absence of something?”