An unusually warm patch of seawater off the West Coast in late 2014 and 2015, nicknamed “the blob,” was part of an offshore pattern that had cascading effects up and down the coast. Its sphere of influence was centered on the marine environment but extended to weather on land.

“Washington and Oregon was really the bullseye for the whole thing, because of the location of the winds,” said lead author Dan Jaffe, a professor of atmospheric sciences at the University of Washington Bothell. “Salt Lake City and Sacramento were on the edge of this event, but because their ozone is typically higher, those cities felt some of the more acute effects.” 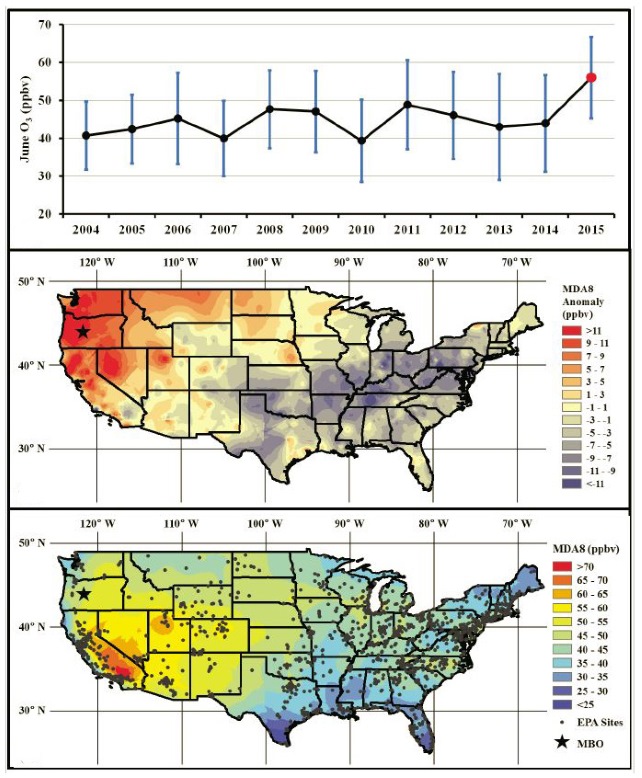 Top: The June 2015 measurement of ozone at the summit of Mount Bachelor (red dot) was significantly higher than any of the previous measurements. Middle: Differences from average ozone levels in June 2015, when “the blob” was creating unusual conditions along the West Coast. The star shows the location of Mount Bachelor Observatory. Bottom: Typical June ozone concentration across the U.S. Image credit: Dan Jaffe/University of Washington Bothell

The other author is Lei Zhang, a postdoctoral researcher at UW Bothell.

The study finds that terrestrial effects of the high-pressure system that produced “the blob” — warm temperatures, low cloud cover and calmer air — were the perfect ingredients to produce ozone. Ozone levels in June 2015 were between 3 and 13 parts per billion higher than average over the northwestern United States. The pattern pushed ozone concentrations in Salt Lake City and Sacramento above federally allowed limits.

Ozone is an invisible component of smog that is a secondary pollutant formed by a chain reaction. Cars, factories and other sources emit pollution into the atmosphere. Solar rays then provide the spark for chemical reactions that produce the three linked oxygen atoms of ozone. This molecule is hazardous to human health and is subject to federal regulations.

Jaffe’s research group has been measuring ozone since 2004 atop Mount Bachelor in central Oregon to tease apart the sources of ozone and other pollutants, such as forest fires, transport of pollution from overseas and domestic pollution from the United States. In June 2015, members noticed a spike in ozone above any previous measurements.

“At first we were like ‘Whoa, maybe we made a mistake.’ We looked at our sensors to see if we made an error in the calibration. But we couldn’t find any mistakes,” Jaffe said. “Then I looked at other ozone data from around the Pacific Northwest, and everybody was high that year.”

Jaffe’s measurements are from the University of Washington’s Mount Bachelor Observatory in central Oregon. Members of his group use the ski hill’s lifts for transportation and electrical power to support year-round measurements at the 9,000-foot peak. Air is pulled with vacuum pumps into a room to be sampled by a variety of instruments in the summit’s lift house.

The June 2015 ozone levels at the observatory were 12 parts per billion higher than the average of previous observations for that time. Jaffe learned that air quality managers in Sacramento and Salt Lake City had several times recorded eight-hour averages above the 70 parts per billion limit set by the federal Environmental Protection Agency.

“This was a very widespread phenomenon going all the way to California,” Jaffe said. “Managers saw that air quality was violating the air quality standards on many days, and they didn’t know why.”

The new study analyzes larger-scale climate data to show that the areas that recorded higher-than-normal ozone were the same regions that had high temperatures, weak winds and low cloud cover.

“Ultimately, it all links back to the blob, which was the most unusual meteorological event we’ve had in decades,” Jaffe said. “Temperatures were high, and it was much less cloudy than normal, both of which trigger ozone production. And because of that high-pressure system off the coast, the winds were much lower than normal. Winds blow pollution away, but when they don’t blow, you get stagnation and the pollution is higher.”

The paper also finds an effect from higher biogenic emissions, the scented emissions from trees and plants that contain natural ozone-producing particles.

The study focuses on June 2015 because the wildfire season began in July and dominated conditions in the later summer. Jaffe’s group is exploring that effect in a separate project.

While it is generally understood that warmer temperatures will favor ozone production, Jaffe said, this study suggests that broader-scale climate patterns also play a role in air quality and human health.

“Our environmental laws need to be written with an understanding that there’s a lot of variability from one year to the next, and with an understanding of the long-term path of where we’re heading under climate change,” Jaffe said. “This work helps us understand the link between climate variability and air quality, and it can give us an idea of what to expect as our planet continues to warm.”

The study was funded by the National Science Foundation and the National Oceanic and Atmospheric Administration.